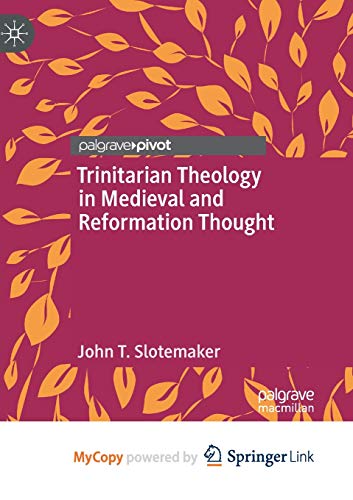 Trinitarian Theology in the Medieval and Reformation Thought

When one thinks of medieval Trinitarian theology, “introductory” does not often come to mind. The heights of reflection achieved in the 13–15th centuries have rarely, if ever, been matched. Yet, what transpired in this period largely set the table with the questions and solutions that have kept theologians busy for the past five hundred years. The early 13th century saw the adoption of Peter Lombard’s Sentences as the standard text for theological education in the universities, as well as the official approval of his Trinitarian theology at the Fourth Lateran Council. These decisions would have widely felt effects. Sadly, much of these developments remains in obscurity for those who have not braved the imposing Latin tomes of commentary on the Sentences. And among Protestant evangelicals, Nicaea can often struggle to get a hearing, to say nothing of Lateran IV. Recently, however, medievalists such as John T. Slotemaker have begun to make this period more accessible to non-specialists.

Slotemaker canvasses the “long medieval period” from around 1000–1550 for the sake of outlining “a common or basic trinitarian theology held by almost all medieval and Reformation era Christians” (p. 2). Mainly he has in mind a series of commitments surrounding theological epistemology, the divine processions and relations between the divine persons, and how we conceive of “person” and personal distinction in Trinitarian discourse. Three main chapters touch on each of these themes, framed by a brief introduction and conclusion.

The chapter on theological epistemology traces some ways theologians came to a broad set of shared commitments on how we know the Trinity. Mostly, these commitments center on the need for divine revelation and the ministerial but large role for reason in tracing out the implications of revelation. The necessity of reason being guided by divine revelation asserts itself most forcefully as 14th-century theologians think through the compatibility of Aristotelian logic with the doctrine of the Trinity. The third chapter takes up some of these issues in an overview of how theologians in the 13–14th centuries thought about the divine processions and relations. Here, a set of questions concerning the Father’s eternal generation of the Son would push theologians to the heights of Trinitarian speculation and back down again to more apophatic approaches, the influence of which would be felt in Reformation theologies. Wrestling with different language in the Nicene and Nicene-Constantinopolitan Creeds, theologians had to ask what the relation of the Son’s eternal generation was to the divine essence. Although the question might strike casual readers as a bit fussy, there were some serious metaphysical issues in play. Every divine person is identical to the divine essence and only conceptually distinct from it. So, if one divine person begets or spirates another, can we not say that the divine essence begets and is begotten, or spirates and proceeds? That would appear to be the consequence of a normal Aristotelian syllogism. But it was an unacceptable conclusion for theology.

For various reasons, Lateran IV decided that the divine essence itself is neither the agent nor product of generation. This decision elevated a particular reading of the fathers, notably Augustine, and shaped subsequent discussions of this issue. Augustine’s distinction between two ways of speaking about God, which he elaborates in De Trinitate 5–7, became increasingly important for Trinitarian theology in this period. Slotemaker economically discusses the various approaches to how Lateran IV’s reading of Augustine influenced accounts of the Son’s eternal generation and the Spirit’s procession, as well as the kinds of relations obtaining between them. Here we are given brief treatments of the various solutions provided by Henry of Ghent, Duns Scotus, William of Ockham, and others like Gregory Rimini. What emerges is another set of common commitments. First, the divine emanations were “limned by a very particular set of conciliar statements emerging from Lateran IV as well as an Aristotelian philosophy of substances” (p. 74). Second, the debate about the relations between the persons rested on an agreement that there were four relations in God: active and passive relations in both the Son’s begetting and the Spirit’s procession. Even where these constraints were resisted, as in some Reformers, the common commitments were mostly retained.

Finally, the fourth chapter gives an overview of personal distinction in the Trinity. Through the various construals of Richard of St. Victor, Aquinas, and Scotus, there was a commonly accepted view that there are three distinct subsistent beings in God (p. 88). Beyond this very basic common denominator, there were questions about what distinguishes them and how. Peter Abelard’s interest in demonstrating the Trinity from the triad of “power, wisdom, and goodness” led him to distinguish the persons with these attributes. This view won him no small degree of censure and ridicule, leading theologians to distinguish carefully between “appropriations” and personal properties. Here again, books 5–7 of Augustine’s De Trinitate—as read by Lombard—loomed large. Lombard argued that the persons were distinguished by personal properties. And his commentators would proceed to ask whether personal properties are the divine persons themselves, or whether the properties are “constituted” of the divine essence and the persons. Slotemaker’s discussion of the four different approaches to this question between 1250 and 1550 is illuminating and arguably the book’s chief contribution (p. 94–107).

In part of his conclusion, Slotemaker summarizes the constraining forces on trinitarian speculation in medieval theology. These forces end up coming back again and again to Lombard and Aristotle. First, there is the influence of Lombard’s Sentences, and the way it affected how theologians treated the issues and what questions they thought were relevant. Second, there was the narrowing effect of Lombard’s sources, which were mostly occupied with (a certain reading of) Augustine. Third, the influence of Lateran IV, which vindicated Lombard against some of his critics, shut down many of the paths explored in the 12th century—a development which Slotemaker neither praises nor condemns. The fourth and fifth points are very alike. For better or worse, the importance of Aristotelian metaphysics and logic channeled Trinitarian discussions in directions that are historically contingent and might have been otherwise.

Apart from the brief discussions of the material issues, these summary points are the main takeaways from the book. Slotemaker states them all with appropriate nuance and care, avoiding grandiose judgments about the historical trajectory of trinitarian theology. Overall, this is a useful little volume for teachers, advanced students, and scholars looking for entryways into these issues.

The book’s shortcomings pertain to its brevity. One wishes for more: discussion of different perspectives on the divine missions, more intricate overview of appropriation, and more extensive quotation of original sources (particularly of those that are hard to find). Sometimes the discussion of intricate arguments errs so much on the side of brevity that it can be hard to follow. And though “Reformation thought” is in the title, it plays little role in the actual argument.

But these shortcomings are small. There remains much to glean from this slim volume, with the hope of more to come from its author. Summarizing the main currents of medieval reflection on one of the faith’s most mysterious truths is no easy task, much less in such a short compass. That Slotemaker largely succeeds is impressive and an occasion for gratitude.