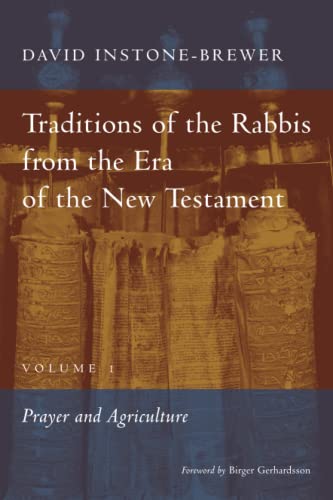 The potential value of Jewish Rabbinic sources for New Testament studies has been recognised for a long time. While only specialists were able to read the original Hebrew sources, many students have used the various collections of such text in translation for their understanding of Biblical texts. However, many of these selections of rabbinic texts have rightly been criticised for their lack of precise dating of the traditions they contain. Often such texts have been used as quarries for pursuing different quests rather than making an effort to understand these rabbinic texts in their own contexts before such insights were applied to Biblical texts.

The new series Traditions of the Rabbis from the Era of the New Testament by Dr Instone-Brewer of Tyndale House in Cambridge successfully avoids both of these mistakes. The author sets out with a fine introduction to Rabbinic traditions, describing their authors, the ways and process in which this material has been gathered, passed on and edited, the structure of Rabbinic laws and the various editions and translations. He traces the different Rabbinic generations (authorities named in the Mishnah) and addresses the knotty problem of dating these traditions which—in some cases—were transmitted orally for many decades before they were put into writing at about 200 CE. It is important to understand the origins of the rabbinic debates on certain subjects rather than the conclusion drawn at later times. He goes on to develop persuasive tools for dating Rabbinic traditions (the problems involved, dating sayings attributed to named individuals, logical precedence in anonymous sayings, other ways of dating anonymous sayings), because only traditions which can be traced to the first century BCE or CE can be used with a degree of certainty for illuminating the background of many NT passages (‘The aim of this work is to collect rabbinic traditions which originated in the NT era, which is defined as the first century before 70 CE’, 1). Instone-Brewer establishes different levels of confidence in dating.

In this and further volumes Instone-Brewer follows the Mishnah (a collection of such traditions) which is arranged according to subject matters. Volume 1 covers the Mishnah tractates on agriculture (Zeraim) which includes the tractate on prayer (Berakhot), selecting and discussing in detail only material that can be dated to the NT. For these passages of the tractates Instone-Brewer provides and Introduction to the context and argument of the Mishnah (including summaries of sections which are not discussed in detail due to their later origin), the Hebrew text with a fresh translation, detailed comments and explanations. This is followed by a discussion of the dating in which Instone-Brewer applies the criteria established in the introduction and argues why this material belongs to the NT era. At the end of each section he indicates where and how this material is helpful for understanding the NT.

The volume closes with a glossary of Mishnaic Hebrew, indexes of named individuals and places, of subjects and of scripture references which allow its use as a reference tool. The series is not directed to undergraduate students. However, the introduction is useful reading for all students. Patient reading of a few dozen pages provides a good sense for the Jewish world in the background of the NT, in particular the Gospels, and for the usefulness of studying such material for a better understanding of biblical texts. Students and scholars will find at their fingertips a wealth of information competently prepared as well as clearly and accessibly presented.

Through his original approach Instone-Brewer avoids the weaknesses of earlier collections and does justice to documents that to this day are crucial for the understanding and practice of Judaism. Students and scholars are in the author’s debt for providing a very helpful tool that will prove its value. The series will consist of six volumes. Further information under http://www.t-r-e-n-t.com.