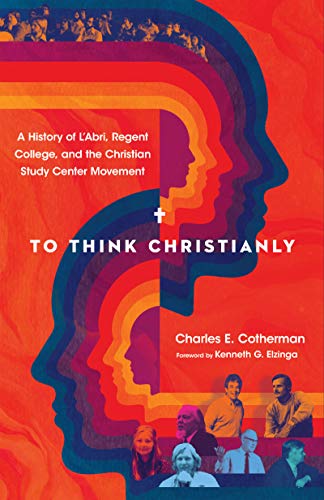 To Think Christianly: A History of L’Abri, Regent College, and the Christian Study Center Movement

Over the past generation or so, scholars have written at length about the history of Christian higher education in America. The best-known works have focused upon the decline of Christian commitments at now-secular universities, though many have examined the stories of various institutions that have remained more or less faithful to their historic Christian identity. More recent years have witnessed the first scholarly studies of evangelical campus ministries, most notably Campus Crusade for Christ (now Cru) and InterVarsity Christian Fellowship. Many of these works have proven to be of immense value to historians, theologians, academic administrators, and campus ministry leaders.

Cotherman begins by retreading familiar territory: the history of L’Abri and the influence of Francis Schaeffer among evangelical baby boomers. Schaeffer’s combination of apologetics and hospitality at L’Abri, along with his later status as an evangelical public intellectual, demonstrated the validity of a more cerebral and cosmopolitan approach to discipleship among collegians and graduate students. Among those inspired by Schaeffer’s strategy (if not the personality cult that sometimes surrounded him) was James Houston, an Oxford geologist turned spiritual formation pioneer who relocated to Vancouver to found Regent College in 1968. While L’Abri was more of a haven for spiritual seekers, Regent was founded as a lay ministry training institute attached to the University of Vancouver. While Regent eventually became a more traditional divinity school—much to Houston’s chagrin—a combination of the L’Abri vision and the early Regent model appealed to many evangelicals in the 1970s and 1980s.

After establishing L’Abri and Regent as the fountainhead, Cotherman looks at four case studies that, to varying degrees, contributed to the Christian Study Center movement. In Washington DC, the C. S. Lewis Institute, modeled closely after Regent, was unable to establish long-term ties to a university, despite Houston’s early involvement. It evolved into a think-tank that reinforced Christian worldview thinking among believers working in the nation’s capital. The Ligonier Valley Study Center, modeled more after L’Abri, gradually evolved into a Reformed teaching ministry built around the personality and gifts of theologian R. C. Sproul. The ministry pioneered video teaching series and eventually closed its Pennsylvania retreat center and relocated to Orlando, Florida.

New College Berkley was the “edgiest” of the early proto study centers, situated near the center of the 1960s and 1970s counterculture in Southern California. Like Regent, with whom it shared some personnel, New College evolved into more of a traditional divinity school, albeit one that retained an emphasis on lay theological education imbued more overtly with the ethos of the emerging evangelical left. The Center for Christian Study at the University of Virginia (UVA) emerged out of an earlier evangelistic ministry and thrived because of its close ties to a flourishing Presbyterian church committed to university outreach. This fourth example, which included a full range of co-curricular activities aimed at cultivating intellectual discipleship at a deeply secular institution, became the model for most of the study centers launched from the 1990s onward.

The final chapter, which is necessarily more impressionistic because of its recent subject matter, looks at the emergence of other study centers inspired by the Center for Christian Study at UVA and the formation of the Consortium of Christian Study Centers in 2008. Indebted to the early vision of L’Abri and Regent, but influenced more recently by UVA professor James Davidson Hunter’s “faithful presence” model of Christian cultural engagement, the ministries affiliated with the Consortium continue to promote intellectual discipleship in an increasingly hostile environment.

Overall, Cotherman does a fine job of offering a critical-but-appreciative history of the Christian Study Center movement. He makes a compelling case for the seminal influence of L’Abri and Regent and ably demonstrates how various ministries attempted to emulate elements of those two prime influencers before the Christian Study Center model became the one most easily replicated and exported. Though he is an insider as a product of the Center for Christian Study at UVA, Cotherman recognizes various weaknesses and shortcomings to the movement, including the tendency to be too personality-driven in earlier days and more recent failures to attract students from backgrounds that are non-white and less affluent. Later historians will likely want to spend more time evaluating how the movement compares with more traditional evangelical campus ministries and the conservative think-tank movement, each of which overlaps in some ways with Christian Study Centers.

Historians and campus ministry leaders will appreciate Cotherman’s book because of the gap it fills in the literature related to evangelicals and higher education. Perhaps more important, some readers will walk away inspired to establish Christian Study Centers and similar ministries dedicated to intellectual discipleship in increasingly anti-Christian academic environments. I pray the latter is the case.