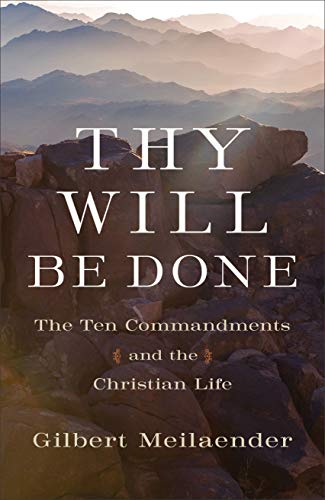 Thy Will Be Done: The Ten Commandments and the Christian Life

In the West, even non-Christians are typically aware of the Ten Commandments. Although they may not be able to list them, many consider them important. The Decalogue remains a part of the cultural memory in the English-speaking world in part due to the 1956 film starring Charlton Heston that depicts a portion of Israel’s history for popular audiences. The danger of popular attention to the Ten Commandments, however, is that they are valued more as a symbol than for their content.

If much more is assumed than understood about the Decalogue in popular culture, then this is not due to a lack of publication by explicitly religious authors. In the Reformed tradition, the Ten Commandments are often used as the framework for Christian ethics (e.g., John M. Frame, The Doctrine of the Christian Life [Phillipsburg, NJ: Presbyterian & Reformed, 2008]). Even among Protestants who regard the Mosaic covenant as having been superseded, there is a tendency to see the Decalogue as central to Christian morality (e.g., Wayne Grudem, Christian Ethics: An Introduction to Biblical Moral Reasoning [Wheaton, IL: Crossway, 2018]). It might seem that among such a burgeoning backlist that another book on the Decalogue would get lost in the noise, but Gilbert Meilaender has managed to write a volume on the topic that is fresh and engaging.

Meilaender is senior research professor at Valparaiso University in Indiana. He has served in a number of prominent public positions, including as an advisor to President George W. Bush, even as he has faithfully published roughly a dozen volumes on ethics of various types. All of his books are worth reading. Moreover, he writes beautifully, even as he wrestles with contemporary questions from a firmly orthodox theological vantage point. Not surprisingly, his recent book, Thy Will Be Done: The Ten Commandments, is another worthy entry into an impressive collection of published works.

Chapter 1 begins by considering the role of the Decalogue in Christian morality. Meilaender surveys different approaches to the Ten Commandments throughout Christian history, particularly noting the apparent conflict between the continued applicability of the Old Testament Law and Paul’s statements in Galatians about being free from the Law. Meilaender’s conclusion is to resurrect the ancient understanding of freedom as living within the appropriate bounds. In the second chapter, the book shifts to discussing the five human bonds that Meilaender uses as a framework for the whole book. The first of those bonds is marriage. In the midst of social turmoil over redefinitions of marriage, Meilaender reinforces the complementary aspect of marriage as between two (and only two) individuals of naturally born distinct sexes. This is rooted in the creation narrative, rather than in later texts, but it is reinforced by the commandment that prohibits adultery. Meilaender affirms the traditional, Christian view of marriage by putting forward a positive case for natural marriage that goes beyond biological reproduction into its representation of the gospel.

Chapter 3 wrestles with the family bond, which is reinforced by the command to honor father and mother. Meilaender’s emphasis is not on the sanctity of the nuclear family, but the mutual responsibility that comes from being in familial relationship. He argues that the family should be a school for virtue, rather than merely a sanctuary from the world. The fourth chapter explores the life bond, grounded in the prohibition against murder. As many in the Christian tradition have done, Meilaender inverts this prohibition to a more general affirmation of the goodness of human life, in which we are all united since creation. This chapter mulls over the nature of war, the central aims of medical care, prohibitions against suicide, and the hope of redemption. This is the longest chapter of the book at twenty-six pages.

Chapter 5 covers what Meilaender calls the “possessions bond,” dealing with the prohibitions against stealing and coveting, and the positive command to remember the Sabbath. The chapter argues for a moderated understanding of private property, which affirms the goodness of ownership but tempers that with a strong reminder that possessions are given in stewardship for the greater good. His grouping of sabbath keeping with other, more typical, property commands is a helpful reminder that in its original, agricultural context the requirement not to work on one day of the week was more than a test of spirituality; it was a way to demonstrate contentedness with one’s material wealth. The sixth chapter shifts to a discussion of the “speech bond,” wherein Meilaender treats the command not to bear false witness and not to take God’s name in vain. The thesis of this chapter is that communication is meant to point toward truth, which is at the heart of both commandments. The chapter begins by discussing the speech bond as it was meant to be, the ways it needs healing in contemporary culture, and the hope of its redemption.

Chapter 7 serves as the conclusion of the book. Here the great commandment—to love God above all—is celebrated and placed as the crown jewel of the Decalogue. This last, and brief, chapter argues that fulfilling this command is accomplished by restoring the bonds previously discussed, but only if done for love of God first and foremost.

At one hundred and twenty-five pages of content, Thy Will Be Done is a reminder that a book need not be long to be powerful. While there is little original in this brief volume, which Meilaender himself acknowledges, it is beautifully written and exemplary of a rich meditation on a well-known text. This is no mean praise. There are dozens of books, ancient and modern, on the Decalogue as a centerpiece to Christian ethics. Meilaender’s book is a worthy entry into the library of a pastor, professor, or educated layperson. It weaves together voices from church history while maintaining a focus on the challenges of the present day. It demonstrates a reliance on Scripture that recognizes both its historic truths and the future realities it proclaims. Most significantly, this book keeps the gospel at the center of Christian discipleship, so that the ethics Meilaender outlines are not obedience for the sake of merit, but faithfulness in response to grace and in anticipation of the coming redemption of all things. This is a hopeful book that is a pleasure to read.