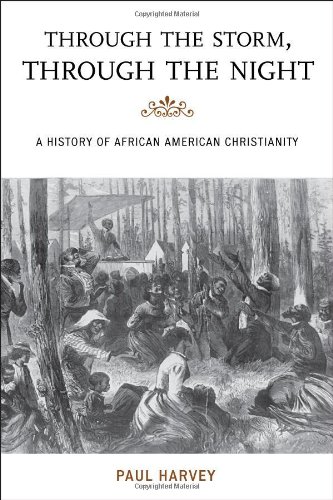 Through the Storm, Through the Night: A History of African American Christianity

Following the tradition of classic works like Albert Raboteau's Slave Religion (1979) and Mechal Sobel's Trabelin' On (1979), Harvey begins this history on the African continent at the time of the Trans-Atlantic Slave Trade. To understand what developed into African-American Christianity, there must be discussion of the general religious culture of West and West Central Africans. What is of particular interest in this section of the book is that Harvey highlights that there were Christians and Muslims who were part of the nearly twelve million African slave captives who survived the Middle Passage and landed in the locales of the New World. Drawing from recent scholarship on the Slave Trade and the development of New World African-American cultures, Harvey notes that some slave owners preferred to purchase slaves from specific regions in Africa; therefore, African slaves from a certain area would arrive in the same region in North America. For example, Virginia slave owners preferred African captives from the Bight of Biafra and Benin. The importance of this phenomenon to Harvey's discussion at this point in the text is to assert that there was clear retention of features of African religious cultures that would be incorporated into Christian teaching and culture.

Throughout the rest of the book, Harvey offers some nuanced insights. For example, in discussing African-American Christianity during the early twentieth century, Harvey notes that the Great Migration had a significant role in redefining the African-American Church. The advent of Holiness/Pentecostal churches looms large in this discussion as challenging established Baptist and Methodist churches as well as being the incubator of the new gospel sound by giving artists like Thomas Dorsey a place to hone that new style. According to Harvey, African-American migration also gave rise to movements like those of Father Divine and the All-Nations Pentecostal Church that spoke to the realities of African-American life in large urban contexts such as New York City and Chicago.

Even without a plethora of nuance, Harvey continually offers support for the three paradoxes that frame the entire story; but the support is more heavily weighed in favor of African-American Christianity as a tool of African-American freedom. He offers examples from Richard Allen and the founding of the African Methodist Episcopal Church in 1816 to the Christian-inspired civil rights movement of the 1950s and 1960s. In reading this narrative within Harvey's framework, there can be no separation between African-American Christianity's historical emphasis on freedom and the persistence of white American supremacy. Harvey pinpoints this in terms of white Christian support of the slave system and Jim Crow segregation in the South. One particular theme is clear from this work: the development of African-American Christianity occurred amidst slavery; and in slavery's aftermath a still potent white power structure pervaded and defined American society.

One weakness of the book is the lack of attention Harvey gives to the third paradox: the general theological conservatism of African-American Christianity helping to promote liberal or progressive social and political movements. Harvey assumes conservatism in most cases, but there is a need for him to define this for his readers because this is an important aspect of this particular history. For example, in writing about King's Christian framework, Harvey retells a story about King having a type of crisis-moment in which he acknowledged that he had to have a personal relationship with God because he had basically been a cultural Christian (pp. 111-12). This example fails to dig further into King's theological influences, which were firmly liberal Christian.

The major strength of this narrative is how Harvey is able to blend intriguing stories of the development of African-American Christianity in a neat volume. He offers us the historic contributions of women as both preachers in the person of the African Methodist Jarena Lee, abolitionists such as Sojourner Truth and Harriet Tubman all in the nineteenth century to the proponent of early twentieth-century racial uplift and progressivism, the Baptist Nannie Helen Burroughs. Regarding cultural expressions, Harvey highlights African-American Christianity's contributions to American music in the forms of spirituals, gospel music, and the freedom songs of the civil rights era. He also finds space to acquaint his readers with the more recent trend of African and Afro-Caribbean immigrants and how they are changing African-American Christianity into a phenomenon more complex.

For a volume of this length, Harvey has given students, scholars, and all interested a fine introduction to the richness, dynamism, and vibrancy of a major aspect of African-American life and culture. For scholars and interested students who desire more from this short work, Harvey includes a nice section of primary sources and a fine bibliographic essay. Though Harvey asserts that the “black church” is a “figment of academic imagination” (p. 8), he realizes that the African-American church is alive and well as illustrated in the Barack Obama-Jeremiah Wright controversy in 2008. Their dialogue also indicates that Christianity for African-Americans fails to be a singular voice for all.