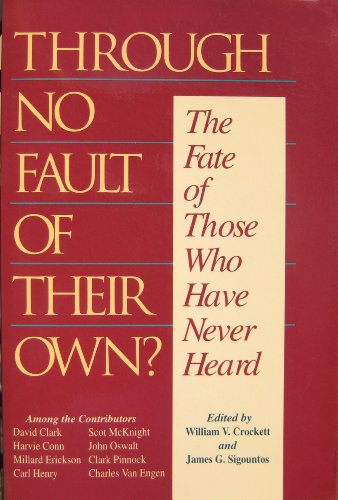 Through No Fault of Their Own? The Fate of Those Who Have Never Heard

The religious pluralism of Western societies is finally forcing evangelicals to reflect theologically on an issue that has been at the forefront of ecumenical discussion for more than a generation. The Tyndale Fellowship’s joint conference at Oak Hill Theological College, London, in 1991 led to the production of the helpful volume edited by Andrew Clarke and Bruce Winter, One God, One Lord in a World of Religious Pluralism (Tyndale House, 1991). Now North American evangelicals have contributed two important works to the discussion.

The volume by Crockett and Sigountos gathers together a collection of essays which for the most part defend Christian exclusivism. A primary target for many of the essayists is the recent work of John Hick and Paul Knittner, The Myth of Christian Uniqueness (Orbis, 1987). Under ‘Theological Reflections’, Millard Erickson outlines the state of the question, David Clark argues that special revelation is necessary for salvation, Timothy Phillips reflects christologically on hell, and Jerry Walls rejects the idea that the experience of Jonah with the Ninevites shows that God could change his mind about eternal punishment.

The articles under ‘Biblical Exegesis’ prove a bit more thorough and diverse. Scot McKnight uses NT texts to refute annihilationism; Crockett does the same for universalism. But what about those who have never heard? Aida Spencer outlines from Romans 1 the traditional Reformed argument that general revelation is sufficient to render all people without excuse but insufficient to save anyone. Doug Moo defends a Lutheran understanding of Romans 2, so that those who are saved by doing good works represent a purely hypothetical category into which no human beings ever actually fall. And Darrell Bock disputes that Acts 17 can be used to teach that some can find God apart from the knowledge of the gospel. On the other hand, Bryan Widbin holds the door open for some who have never encountered God’s covenants with Israel or the church to be saved via the OT analogies of Melchizedek, Jethro, Abimelech and Job. Clark Pinnock stresses that Acts 4:12 teaches that no-one will be saved apart from the power of Christ, not that no-one will be saved apart from knowledge of him. Two studies by John Oswalt on the mission of Israel to the nations and by Frederick Schmidt on Jesus and the salvation of the Gentiles determine that their ‘databases’ prove inconclusive for the questions at hand.

A section on ‘Missiological Issues’ again disputes unitive pluralism (‘all roads lead to heaven’) and universalism (‘God will eventually save everyone’) in view of the damaging consequences they have for missions (articles by Timothy Westergren and Charles van Engen). Harvie Conn sets out the missiological issues that need to be addressed in answering the question, ‘Do other religions save?’. Tite Tiénou disputes Don Richardson’s popular Eternity in Their Hearts (Regal, 1981). And Sigountos denies that the first centuries of Christianity believed to any significant degree that pagan religions could save. Still, John Ellenberger again leaves the door open for those who have never heard, in a few instances, to be accepted by God on the basis of the way they would have responded had they heard. He dispels the myth that this view discourages missions; in fact it encourages that there will be a good response in places. But the actual experience of missionaries suggests that such positive preparation for the gospel in non-Christian religions is rare enough that the urgency to evangelize the world is scarcely diminished.

Two closing essays consider the question of fairness in condemning those who have never heard (Carl Henry) and a summary of issues involved in addressing the fate of the heathen (Crockett and Sigountos). Among other things, they call for more systematic reflection on the topic from evangelicals.

John Sanders provides precisely such reflection in his slightly newer book. Because his is not a collection of essays, it develops a sustained, coherent argument. The volume surveys in great detail the various views adopted throughout church history concerning the destiny of the unevangelized. Sanders begins by presenting and critiquing the two extremes, restrictivism and universalism. Then he considers three versions of ‘the wider hope’—universal evangelization before death (either God will directly reveal himself to all, give a universal opportunity at death, or judge on the basis of middle knowledge—how people would have responded had they heard), eschatological evangelization (people will have a second chance after death), and inclusivism (universally accessible salvation apart from evangelization). For each view, he presents the biblical data used to support the position, relevant theological considerations, leading defenders, and an evaluation. Appended are immense bibliographies of supporters of each perspective.

Sanders himself opts for the last of these wider views, believing that God will treat those who have not received special revelation as he did people in OT times, looking for those who have faith in God as they know him rather than relying on their own works for salvation. Among noteworthy supporters of this view, he discusses John Wesley, C.S. Lewis and Clark Pinnock; in his bibliography of additional adherents appear such well-known names as Clement of Rome, Justin Martyr, Irenaeus, Abelard, Zwingli, Erasmus, John Milton, Matthew Henry, William Paley, Joseph Butler, William Shedd, William Booth, Augustus Strong, Soren Kierkegaard, G. Campbell Morgan, E.J. Carnell, Bernard Ramm, Peter Cotterell, Tom Wright, George Ladd, Stephen Travis, Sir Norman Anderson, and numerous others.

Here, then, is a book which rejects most of the liberal perspectives which the Crockett and Sigountos volume also targets, but fills a gap in that volume with carefully reasoned exegesis and systematic theology in support of a view which a growing minority of evangelicals is advocating. One might even say the view is thrust upon us as a crucial part of our cross-cultural apologetics. For what is one to say to a recent convert to Christianity, from a largely unevangelized culture, who asks, ‘But what of my recently deceased relatives, who believed exactly as I did before hearing the gospel?’ The wise pastor, evangelist or lay witness does not try to defend absolute restrictivism in such instances! Sanders supplies hope that evangelicals can do credible, balanced work on the topic without rushing headlong into the heresy of universalism or the disobedience of failing to evangelize at all.