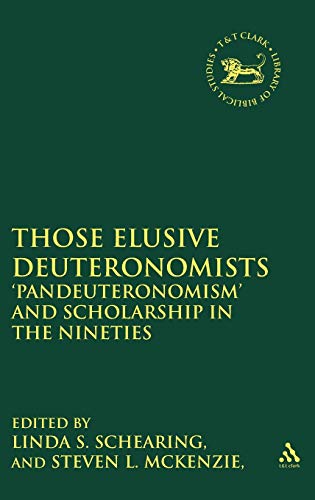 In the last decades the phenomenon of pan-deuteronomism has swept through OT scholarship. The deuteronomistic movement has been credited with the formation of almost the entire OT, and the activity of the Deuteronomists has been claimed even in the Maccabean period. However, the recurrent problem has been the lack of well-defined criteria for putting the label ‘deuteronomistic’ on a given text or phrase. And almost no one has reflected upon the proper basis for assuming a sociologically distinct movement or ‘school’. The summary of Judges 17:6, ‘everyone did what was right in his own eyes’, in many ways describes the attitude among scholars. Or, as Lohfink (37) notes, ‘today, a self-respecting doctoral student has to find the hand of a Deuteronomist somewhere in the Bible. This is the only way into the guild’.

The next section focuses on the phenomenon of pan-deuteronomism in major parts of the OT. While J. Blenkinsopp (Tetrateuch) opts for a visible deuteronomistic redaction, both R.A. Kugler (Latter Prophets) and J.L. Crenshaw (Writings) expressly deny that the possible linguistic affinity with Deuteronomy indicates a deuteronomistic redaction. Auld (Former Prophets) here as elsewhere goes against the stream with his idea that Deuteronomy has been influenced by the Former Prophets and not vice versa.

Needless to say, there are huge differences between the essays in method and approach. Some authors claim without much methodological reflection one or several deuteronomistic redactions (e.g., Blenkinsopp, Römer, Cook). Others put the concept of deuteronomistic redaction of certain books to a serious test and find the result unconvincing (e.g., Lohfink, Kugler, Ben Zvi). The anthology also displays the grave problems of method and criteria within many studies in deuteronomism. Some assert evidence of deuteronomistic (or other) redaction without any consideration of the difference between random verbal parallels due to a common theme and parallels indicating actual linguistic connection. They never question whether a shared expression is peculiar to the deuteronomistic corpus, or is found elsewhere (e.g., Romer, Patton). Here the studies of Lohfink, Kugler and Ben Zvi represent a most welcome leap forward in methodological clarity. Most of the articles are cautious about the notion of a deuteronomistic movement: deuteronomistic influenceis not the same as redaction by a group.

The book contains several useful essays. Those of Lohfink, Wilson, Kugler and Ben Zvi are especially helpful for setting the current scholarly idea of deuteronomism in proper perspective. Some crucial problems in pan-deuteronomism are not dealt with, however. Martin Noth’s hypothesis of a comprehensive Deuteronomistic History is never discussed, and the widespread notion of a deuteronomistic redaction of Deuteronomy is simply assumed.

Several questions arise in reading this book. All authors assume without discussion that Ur-Deuteronomy was written in Josiah’s time, and that the book’s covenant structure betrays influence from Assyrian vassal treaties. This flaw (in my opinion) means that circumstances are read into Deuteronomy which in reality are absent (e.g., Zion as the spiritual centre), and that passages in Deuteronomy are designated as exilic and therefore utopian. The identification of a given passage as exilic or post-exilic is often proposed on very shaky premises. Despite these reservations, some of the essays offer good contributions to a more proper evaluation of the relation between Deuteronomy and the rest of the OT.