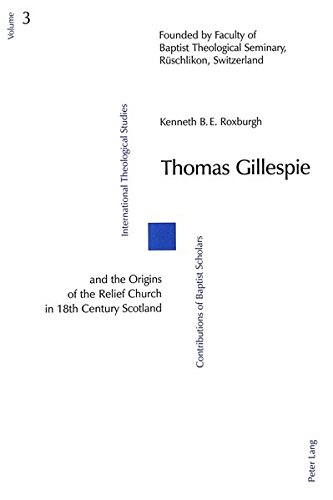 Written by Kenneth B.E. Roxburgh Reviewed By A. T. B. McGowan
History and Historical Theology

This book is the Edinburgh University PhD thesis of Dr Kenneth Roxburgh, Principal of the Scottish Baptist College in Glasgow and editor of The Scottish Bulletin of Evangelical Theology. It is the third volume in a series entitled ‘International Theological Studies: Contributions of Baptist Scholars’.

A minister had been presented to the parish of Inverkeithing by the heritors against the wishes of the parishioners. Gillespie and others supported the congregation in its opposition to this settlement. The matter went back and forward between Presbytery and Assembly until ultimately the General Assembly instructed that the induction of the minister must proceed. Gillespie continued to oppose this decision and was deposed from the ministry of the Church of Scotland in 1752. Gillespie formed the Presbytery of Relief (the Relief Church) in 1761.

The significance of Gillespie, however, does not lie solely in the formation of the Relief Church. His story touches many of the great men and movements of 18thcentury Scottish life. Dr Roxburgh tells us that he was converted through the preaching of Thomas Boston, that he was involved in the Cambuslang Revival of 1742 and that he corresponded with George Whitefield and Jonathan Edwards.

If there is a minor weakness in the book, it is in Roxburgh’s attempt, in chapter 6 and in the conclusion, to demonstrate the influence of the ‘Enlightenment ethos’ on Gillespie’s theology. The evidence he presents for this influence is singularly unconvincing. For example, he writes, ‘In his preaching Gillespie used terminology which was characteristic of the Enlightenment, including words such as “enlightened” and “light” to describe both scriptural revelation and the experience of conversion’. Or again, ‘The optimistic spirit of the Enlightenment can also be discerned in the emphasis which Gillespie gave to the free offer of the gospel’. He even argues that, ‘The optimism of the Enlightenment was also reflected in his emphasis on the doctrine of assurance of salvation’. It would be relatively easy to demonstrate that such language and doctrinal emphases are also evident in pre-Enlightenment Calvinist theologians.

This, however, does not seriously detract from the overall value of the book that is a useful addition to the scholarship of the period. Indeed, we are deeply indebted to Dr Roxburgh for this study of a much-neglected figure and it is to be hoped that it will lead to further work on 18th century Scottish church history and theology.