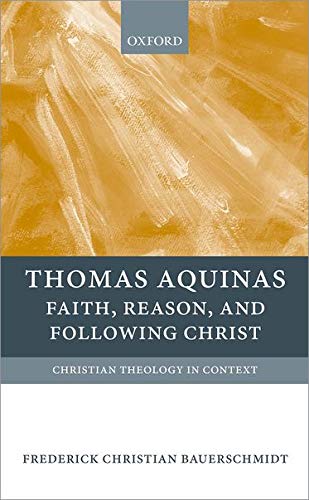 Not everyone would associate Thomas Aquinas and thirteenth-century Europe with Flannery O’Connor and the American South. Fritz Bauerschmidt, currently Professor of Theology at Loyola University in Maryland and self-professed ‘Hillbilly Thomist’, would have you look closer: ‘friar Thomas has more in common than is usually thought with the Christ-haunted, apocalyptic, backwoods preachers that populate O’Connor’s fiction . . . her stories of restless hearts and disruptive grace are not incompatible with Thomas’s view that grace perfects and does not destroy nature’ (p. xi). While the full gist of this statement requires one to read the book, it is motivated in part by Bauerschmidt’s contextualization of Thomas as a Dominican friar.

The whole book is structured around Bauerschmidt’s conviction that Thomas’s thought ultimately revolves around two central concerns, corresponding to the two main parts of the book, namely, the relation between faith and reason and the Christian life that is following Christ. In turn, these concerns are strongly contextualized within the Dominican quest for the apostolic life: ‘In all of Thomas’s intellectual activities, his single goal was at all times the Dominican task of preaching Jesus Christ and caring for souls so that human beings might attain beatitude’ (p. 37).

Bauerschmidt’s analysis often proceeds by carefully walking the reader through texts, keeping us attuned to what Thomas is saying at every point. The expositions of the material—whether it concerns arguments for God’s existence, Thomas’s account of virtue or the sacraments, or his Christology—are incredibly lucid and clear, making often difficult and complex subjects immediately accessible to any reader. For the sake of economy, I restrict myself to the overarching focus on contextualizing Thomas’s thought on faith, reason, and following Christ.

In Thomas’s inaugural sermon, Rigans montes, he describes how God’s own knowledge is made known to us in Scripture and while God is the ultimate teacher, he teaches us through secondary causes, namely, human teachers (pp. 46–51). This offers us an insight into how Thomas understood himself. Holy teaching is a ‘way of life’ for Thomas, a way that contextualizes the theologian’s philosophizing within a set of commitments, beliefs, and practices that indelibly ‘marks’ that philosophizing—keeping philosophy subordinate to theology. Bauerschmidt concludes, ‘Perhaps one ought not to say that Thomas has an intellectual project, which for all the grandeur of Thomas’s thought is still perhaps too grand. It might be truer to Thomas to say that he had an intellectual ministry, the ministerial role of the teacher of divine wisdom’ (p. 81). This insight bears upon both the relation between faith and reason and the way in which God’s people are conformed to Christ.

Consider the section on faith and reason, which in its reflections on the notion of theology as a ‘science’ demonstrates the virtues of contextualizing Thomas as a Dominican preacher. Bauerschmidt insightfully addresses how Thomas’s concept of ‘fittingness’ (convenentia) is at the very foundation of theological science, even though it is not addressed in the first question of the Summa Theologiae—rather showing up in the third part (pp. 160–75). Arguments from ‘fittingness’ are employed by Thomas to demonstrate the ‘aesthetic’ appropriateness in God’s ordering the events of salvation history in just the way God has ordered those events. It is in this way that Thomas will argue against the strict necessity of Christ’s incarnation and opt instead for arguing its fittingness, that is, the way it discloses God’s wisdom. Demonstrating that fittingness is at the heart of Thomas’s use of reason is important: ‘Arguments from fittingness might be thought of as displaying the orderliness of the economy of salvation in such a way as to move the will to praise God’s goodness by the sheer attractive power of the Word made flesh in Christ, with whom Thomas associates beauty in particular’ (p. 167).

The second part of this book is devoted to the theme of ‘Following Christ’, where Bauerschmidt’s chief aim is to demonstrate the ministerial function of the second and third parts of the Summa Theologiae. He concludes with a compelling case that Thomas’ Summa Theologiae, when situated with the concrete patterns of daily life and discipline of the Dominican convent, ‘begins to look less like a speculative treatment of various doctrines and philosophical and theological questions—a detached philosophical or theological discourse—and begins to show itself as one instrument among many by which [the Dominicans] . . . formed people for the tasks of the order in service to the Church’ (pp. 261–62). Holy teaching is therefore a speculative science for the sake of ordering human actions with theological truth, which is one reason among many that the massive Secunda pars cannot be abstracted from the doctrines of God and creation in the Prima pars and the Christology and sacramentology of the Tertia pars. Far from being some detachable philosophical ethics, Thomas’ teaching on virtue and conformity to Christ is summed up in the cross. Nothing could separate him from Aristotle further than this, for Thomas finds in Christ the truth that the ‘act of self-abandonment out of love is both the supreme example and the true path of human happiness’ (p. 263).

To riff on a phrase, ‘a good introduction is hard to find’, but Bauerschmidt has given us one. He presents us with a refreshing portrait of Thomas who employs his considerable intellectual resources to further the cause of the gospel by displaying the beauty of God’s wisdom in Christ crucified. If that is what ‘Hillbilly Thomism’ is all about, may its tribe increase.