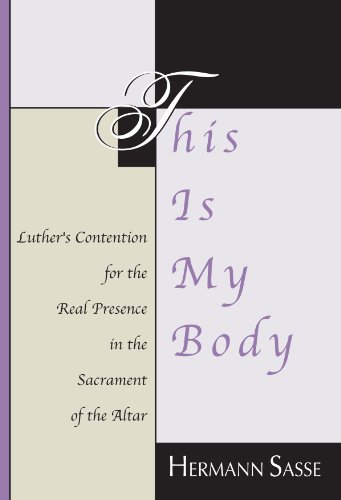 This is My Body

This book consists of a detailed and scholarly study of Luther’s doctrine of the eucharist. The argument is carried through with compelling conviction and with an authoritative command of all source material available. The author gives an account of the mediaeval explanation of the eucharist; how Luther understood it; a detailed account of the debate between Luther and Zwingli; how Bucer and Calvin (and Anglicanism) interpreted the eucharist; and finally, the problem as it is today together with its resolution. Nevertheless, it is not just another learned historical account of the controversy. The book is fired by a concern to discover the truth of the matter and thereby recover the full and true gospel. The author has the touch of the prophet. It is a work of fine and original research, which gives a compelling authority to his conclusions.

It is the author’s deep conviction that in defending the literal meaning of ‘this is my body’, Luther was not defending a view of his own, nor of any theological school, but a basic dogma of the whole Christian church. With the ‘est’ of ‘hoc est corpus meum’, Sasse argues that the doctrine of the incarnation stands or falls: and with the reality of the incarnation stands or falls the church of Jesus Christ. He sees in the great Colloquy of Marburg between Luther and Zwingli (1529), the encounter between a realistic and an idealistic understanding of God’s revelation in Christ. In the final stages of the Colloquy, when the discussions had broken down, Luther proposed his final condition for unison: ‘We confess that, by virtue of the words “This is my body, this is my blood”, the body and blood are truly—hoc est: substantive et essentialiter, non autem quantitative vel qualitative vel localiter—present and distributed in the Lord’s Supper.’ This formula expresses what Luther means by the doctrine of the real presence, i.e. the real body and the real blood are present ‘substantially and essentially’. What is meant by these words is that the true body of Christ (which means the body that was born of the virgin, hung on the cross, and was raised from the grave) was present by virtue of the words of institution really and truly. This presence was to be understood not as a presence in ‘quantity’ (i.e. extension) or ‘quality’ (i.e. the quality which otherwise body and blood have), and not in the sense of a local presence, as mediaeval theologians had already limited the ‘in’ and ‘under’. The difference between Luther and the schoolmen here is that he uses these words, not to give any theoryas to the how of the presence, but only to reject what he calls the ‘geometrical’ or ‘mathematical’ understanding of the presence (we would now say ‘physical’ rather than ‘geometrical’ or ‘mathematical’). What Luther demanded was that the words of Christ be accepted in simple faith while the how remained God’s mystery—just as the incarnation or the resurrection, for that matter. Sasse argues that Christianity stands or falls by this doctrine, and sees the loss of this conviction in Christendom the explanation of its present unbelief, and, therefore, of its failure. It is more than a doctrine of holy communion which is at stake, it is the living Christ. This is Sasse’s deep concern.

The reader may demur that this is a lot to claim, but Sasse argues that no one can understand Luther unless he has understood this fight for the real presence. He goes so far as to say that the life or death of the church depends on the question whether she will be able to regain Luther’s deep understanding of the sacrament, and therewith, the total gospel. He believes that this true understanding can be regained only if the Holy Spirit opens up to each generation the holy scriptures, and therewith, the full gospel. It is impossible to raise counterarguments, for the author anticipates the critic and raises them all. What is more, answers them at the highest level of scholarship.

To work through this passionate and learned book of a deeply committed theologian, line by line, footnote by footnote, will open up, not only Luther’s doctrine of the Lord’s Supper, but clarify that of Rome, Geneva and Canterbury; it will give a penetrating insight into the meaning of worship, a healthy criticism of the ecumenical movement, but above all, a warm, encouraging awareness of the truth of the gospel and of the urgency of the Christian message today.

The reviewer gives his unqualified recommendation. It will make every reader think, and then think again.

Issues for the church in a multi-racial society

Who is my neighbour?

Race, class, caste and the Bible

Church and state in South Africa

by James J. Stamoolis
VIEW ALL VIEW ALL

The Old Testament and Criticism

Mark. The Gospel as Story

The Gospel of John: Introduction, Exposition and Notes

The Faith of Jesus Christ. An Investigation of the Narrative Structure of Galatians 3:1–4:11