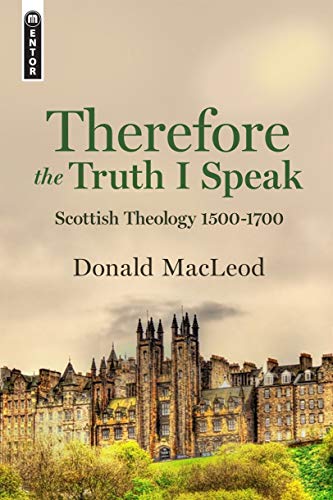 Written by Donald Macleod Reviewed By A. T. B. McGowan
History and Historical Theology

In this book, Professor Donald Macleod, former principal of the Free Church College (now Edinburgh Theological Seminary), traces the history and development of Scottish theology from 1500 until 1700. It is not a volume of church history, although the historical context for each theological discussion is laid out clearly. Nor is it an attempt to give a brief sketch of every Scottish Reformed theologian, as one of his predecessors, another Principal Macleod, had done. The author makes it clear at the very beginning that many illustrious names have been left out in an attempt to go for depth instead of breadth. Rather, this is an exercise in historical theology, charting the development of Scottish Reformed theology and analyzing its various debates and controversies along the way. It is also an excellent primer in Reformed doctrine, as it opens up and expounds the various theological issues under consideration.

Macleod makes the important point that many of the individuals described in the book were ministers rather than academics, although all were competent theologians. This means that their writing was intended for the church and was concerned with helping men and women understand the great truths of Scripture and how those truths impacted their lives and their salvation. Macleod himself has always been a preacher’s theologian, and his concerns are similar to those of his subjects. Indeed, as we read Macleod, we are often caught up in what could easily be a sermon, and occasionally we are lifted into doxology. This is rich theology.

The book begins with the pre-Reformation martyrdoms of Patrick Hamilton and George Wishart before turning to the Scottish Reformation with two chapters on John Knox. These chapters are very much up-to-date with modern scholarship on Knox, not least the recent research by Professor Jane Dawson. Chapters on Andrew Melville, the Second Book of Discipline, Robert Bruce, and Alexander Henderson follow. Then we have two chapters on Samuel Rutherford, followed by two more on David Dickson. The second one of Dickson’s chapters is on federal theology, which then leads to an excursus into the 20th century, with a defence of federal theology against the attacks upon it by T. F. Torrance, J. B. Torrance, and others. Finally, there is a chapter on Robert Leighton, an Episcopalian bishop but also a Calvinist.

Throughout, Macleod makes incidental comments (often very piercing), which demonstrate the implications of some of the debates for today. For example, he compares the high view of the church held by the early Reformers with the views of many today. He notes that “men like Calvin and Knox yielded nothing to Popes and Cardinals in their appreciation of the church as the Mother of us all, in their jealousy for her prerogatives as the one charged with witnessing to Christ, and in their passion for her unity, purity and efficiency.” He then adds, “The devolution of her divinely commissioned ministries to para-church bodies and spiritual private enterprises would come only centuries later” (p. 31). He underlines this strong ecclesiology when discussing the role of the church in international missions:

In recent decades, sadly, the church has once again stood aside, leaving the work of worldwide evangelism to missionary societies which have little patience with any form of ecclesiastical oversight. They can claim, however, that if they are having to do what the church ought to be doing, the blame does not lie with them. Yet the question whether, and how, international mission ought to be ecclesial, remains one of the major challenges facing missiology. (p. 187)

How Macleod guides readers through 18th-century debates on Arminianism, Amyraldianism, Antinomianism, and Neonomianism is a model of clarity, as is his presentation of federal theology and his analysis of the debates surrounding the covenants. This analysis is carried further in the chapter entitled “Federal Theology: The Twentieth-Century Reaction.” Here we find a comprehensive response to the attacks upon federal theology by the Torrance brothers. Their arguments that Beza turned away from Calvin’s pristine Reformed theology to a legalistic and scholastic theology, that federal theology put law before grace, and that the introduction of a doctrine of limited atonement damaged grace and made assurance difficult are all subjected to forensic examination and found wanting. This is achieved with the help of Richard Muller’s excellent scholarship on post-Reformation theology. The only disappointment is that John Murray is not considered when dealing with twentieth-century responses to federal theology. Murray’s insistence that grace comes before law, his rejection of a covenant of works, and his denial that the Mosaic covenant is a “republication” of a covenant of works, would have helped to make clear that classic federal theology and the Torrances’ theology are not the only two options. Murray’s revisionist covenant theology has much to offer.

This is a very fine volume that ought to become a standard work on Scottish theology. We are deeply indebted to Professor Macleod for this labour of love, and we hope that generations of scholars will benefit from his knowledge and wisdom.