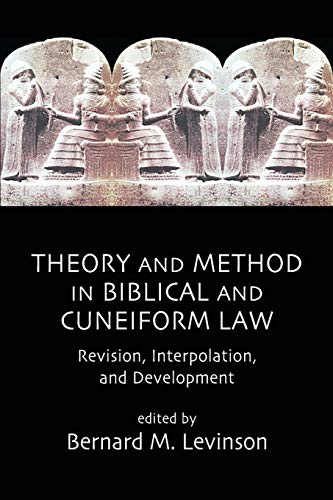 Theory and Method in Biblical and Cunieform Law: Revision, Interpolation, and Development (JSOTS 181)

Westbrook builds his case on the basis of comparative legal analysis, arguing especially for the static and conservative nature of the revision and evolution of ancient Near Eastern laws. Some alleged developments, say between literal talion in the Laws of Hamurabi (LH) and the monetary compensation for the same crimes in the Laws of Eshnunna, are more apparent than real since even LH assumes a system of ransom where literal maiming could be avoided by payment of money. Likewise, developmental analysis of biblical laws by source and form critics assumes a far too dynamic model of development. Rather, laws in Exodus 21:1–22:16, as part of the common law of the ancient Near East, must be assumed to comprise clear and consistent laws, and apparent inconsistencies must be ascribed to our ignorance of the cultural setting rather than to historical development.

Now the critics: B. Levinson catalogues places in biblical law (Ex. 21:16; 22:1ff.; etc.) which he thinks defy synchronic explanation. S. Greengus, while acknowledging a general ‘cultural conservatism’ in ancient Near Eastern (ANE) laws, feels that Westbrook has exaggerated their ‘static’ character, citing developments in Hittite laws. M. Buss seeks to supplement Westbrook’s observation of the ‘unchanging’ character of ANE laws by associating them with ‘natural law’ rather than with ‘positive law’. S. Lafont argues that wide legal diversity in ANE laws on abortion/miscarriage give evidence of ‘evolution’ rather than immutable common law. Likewise, V. Matthews, after a helpful review of slavery in the ANE, finds modifications of the Covenant Code by Deuteronomy and the Holiness Code slave laws. W. Morrow claims that the paucity of second-person formulations in cunieform laws as compared with their relative frequency in the Covenant Code is evidence of modifications of ANE laws by the latter. D. Patrick sees discontinuity between the Book of the Covenant and ANE laws, pointing to ideological differences between the two observed by S. Paul and J. J. Finkelstein as evidence of development, and to differences in genre based on biblical law’s second-person formulations. Finally, E. Otto denies the existence of a ‘static “common law” ’ by giving even more examples of reform between cunieform law collections and within the Covenant Code, along the way convincingly repudiating Westbrook’s notion that talionic penalties could be commuted into monetary payment and visa versa.

Although I applaud Westbrook’s attempt to read the laws synchronically as a coherent unity, his critics correctly show that the assumption of a rigidly static common law tradition in the ANE is an insufficient basis for this methodology. A better basis is the premise that, whatever the sources that were available to the biblical author, he would be expected to craft his material into a meaningful unity. Westbrook has exaggerated the ‘legal’ character of the Book of the Covenant which contains moral precepts as well as ‘laws’, and is part of an I—Thou narrative whose purpose is more religious and ethical than judicial.

Although he overstates his case, Westbrook is correct in seeing the conservative nature of ANE culture as incompatible with the radical evolution assumed by many source and form critics. Moreover, Westbrook’s intuition is right in seeking a unified reading of legal texts. As my own book shows (The Book of the Covenant, JSOTS 174), some of the alleged modifications of the Book of the Covenant by the Holiness Code and Deuteronomy brought up by Westbrook’s critics can be interpreted as complementary rather than contradictory, and Westbrook rightly cautions against abandoning prematurely the attempt to find coherent readings. Westbrook’s critics were to spend as much intellectual energy seeking unified readings of the present form of the laws as they have in seeking disparate sources, they might well be surprised by their results.