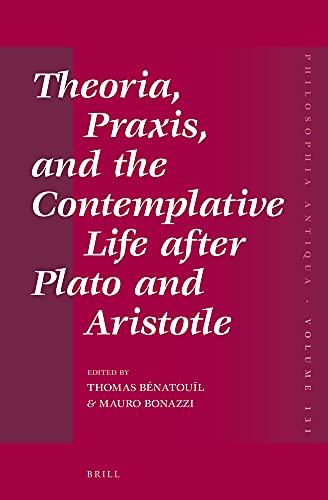 Theoria, Praxis, and the Contemplative Life After Plato and Aristotle

Thomas Bénatouïl and Mauro Bonazzi’s stated goal in their edited edition Theoria, Praxis, and the Contemplative Life after Plato and Aristotle is to reconstruct the history of the topic of theoria and praxis in detail. The editors intend to do this by laying out four characteristics of contemplation that are found in Plato and Aristotle and not in previous thinkers and, using this criterion, to compare various positions. The introduction chapter sets the volume off by giving a brief and helpful historical account of the intellectual terrain at the time period of the volume as well as the history of theoria and praxis.

One of the interesting chapters related to the Hellenistic and post-Hellenistic debate is Thomas Bénatouïl’s fascinating look at one of Aristotle’s successors in the Peripatetic school of thought, Theophrastus. He argues that there is a different evolution of contemplation from the testimonies of the Lyceum that lead to doubts concerning Aristotle’s ideas on theoria. Michael Erler shows that the changes in the Lyceum resemble the Epicurean and Stoic criticisms of Plato and Aristotle while giving an interpretation of the Timaeus. Another fascinating chapter by Margaret Graver gives a close analysis of Seneca’s De otio, thus engaging with the Stoics on Contemplation. She argues that Seneca gives considerable emphasis to theoria as reflecting on a variety of issues by emphasizing the moral benefits. There is much in Seneca that sounds like Plato and Aristotle.

The second part of the book focuses on early imperial Platonism and Neoplatonism. David Sedley argues in his chapter that Alcinous is heavily influenced by the Aristotelian concept of theoria and thus tries to read Aristotle into the Republic. This attempted imposing of Aristotle onto Plato’s dialogues results in Alcinous emphasizing theoria over praxis. A very interesting section of Gerd Van Riel’s chapter on Damascius and the contemplative life is his argument that in the Neoplatonists there is still a heavy Aristotelian influence as seen in the connection between contemplation and pleasure. Van Riel uses Damascius’ Commentary of the Philebus to make his argument.

This volume concludes with two chapters on the contemplative and practical life in early Christianity. Giovanni Catapano’s chapter on Augustine looks at Contra Faustum Manichaeum, where Augustine refutes Faustus’ claim that the OT, and parts of the new, should not be taken as authoritative. In this work, Augustine gives a defense of Jacob’s two wives found in Genesis 30.1–16 and interprets the passage both literally and spiritually. Catapano investigates Augustine’s spiritual reading of what the two women represent in the passage looking specifically at Leah and Rachael’s appearance as well as the significance of their ability, or inability, to bear children. Augustine argues that Leah represents the practical life while Rachael represents the harder to attain life of contemplation. According to Catapano, it was Augustine who set the trend of seeing Leah as the active life and Rachael as the contemplative life.

Carlos Steel’s chapter on Maximus the Confessor, the last Platonic thinker of late antiquity, explores his thoughts on the relationship between theoria and praxis in Ambigua ad Johannem VI (10). Here Maximus gives a clearly Platonic version of theoria, which includes a necessary practical condition that was not mentioned earlier by Gregory of Nazianzus in his Oratio. Maximus claims that right action depends on true insight into the nature of things, but runs into a characteristically Platonic problem. Just as it is impossible for the Platonists to properly contemplate the forms, so it is a problem to properly contemplate a transcendent and superior God.

One of the positives of this volume is how it engages an impressively wide range of scholarship. This volume would be well worth having on the shelf simply as an index to other important literature that deals with the subject matter. If a particular topic is not addressed in this volume the authors and editors seem to have made sure that the reader is directed to other helpful scholarship on the topic. Also, within the volume itself, the multiple indexes at the back of the volume are hugely helpful.

However, there are some things of which to be aware. This volume is not an introduction and requires significant understanding of the time periods and the authors under discussion. The language is highly specialized and technical, and also requires that the reader have at least an intermediate knowledge of classical Greek. But this alone should not keep scholars fascinated with the topic and time period from the volume. There are also a few chapters that are not written in English.

The editors, in the overview, state that they hope that many other volumes on contemplation after Plato and Aristotle will follow. This reviewer certainly agrees with this sentiment. It would be great to see more volumes on theoria and praxis that extend into the medieval times and beyond, and that these future studies are at the high level of research represented in this volume.