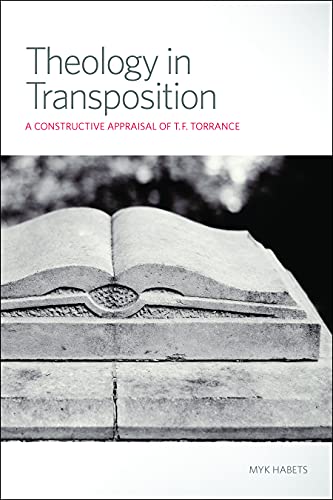 Theology in Transposition: A Constructive Appraisal of T. F. Torrance

In the years since his death in 2007, there has been growing interest in and secondary literature surrounding the Reformed theologian Thomas Forsyth Torrance. Already recognized as a significant figure within Scotland—Donald MacLeod has called him “among the immortals of Scottish theology” (p. 8)—his theological legacy has been appraised with increasing esteem. The praise that has been heaped upon Torrance by Alister McGrath, Elmer Colyer, and Paul Molnar in their recent publications on Torrance is perhaps summed up best in Bruce McCormack’s judgment that Torrance is “the most significant theologian of the late-twentieth century.” However, having recognized Torrance’s contribution, there is a need to engage both critically and constructively with his dogmatic work, lest the conversation about him stagnate in hagiography. This need has been met by Myk Habets in Theology in Transposition: A Constructive Appraisal of T. F. Torrance, who moves the conversation forward in his sensitive, contextual handling of Torrance.

Habets divides his analysis of Torrance into two parts. The first four chapters provide “a critical and concise overview of Torrance’s method and scope—his architectonic scientific Christian dogmatics” (p. 1). Habets first provides a biographical sketch of Torrance; his formative experiences as a child to missionary parents in China, his education in Scotland and in Basel under Karl Barth, and his work in Scotland as a Church of Scotland pastor and as a professor at New College in Edinburgh. Making use of Torrance’s unpublished writings which are currently held in Princeton Theological Seminary’s special collections, the chapter is not only an excellent introduction to Torrance but adds texture to the other biographical accounts that have been published. In chapters two through four, Habets examines in turn three major aspects of Torrance’s thought: the “scientific” structure of his Christian dogmatics, his original position on natural theology which is staked out between Calvin and Barth, and finally his commitment to a realist epistemology and how it informed his theology.

The chapter on Torrance’s epistemology is one of the highlights of the book, for in it Habets places Torrance’s work within the context of Carl Henry’s criticism of Torrance. In God, Revelation, and Authority, Henry devotes an entire chapter to critiquing Torrance’s epistemological commitments, and Habets captures for the first time in print the nature of their conflict and the difference in their two positions. What results is an excellent depiction of the debate between those who work from foundationalist/nominalist positions and those who hold to forms of realism, a depiction that can lead to greater clarity and mutual understanding of the nature of the disagreement. Torrance’s reply to Henry, captured in an audio recording of Torrance’s lectures at Fuller, is trenchant: “So I said to him, Carl Henry, do you believe in partial substitution, and therefore there is something in your reason, Carl Henry, that hasn’t really come under the judgment of the cross of Christ?” (p. 106). But Habets’s reading of Henry is charitable, demonstrating what Torrance might have learned from Henry’s doctrine of Scripture.

In the second part of the book, Habets brings Torrance into constructive conversation with other theologians in the Great Tradition. Chapter five examines Torrance’s “mystical theology” (a term Habets concedes that Torrance would have himself avoided) as well as examining what more Torrance could have learned about “Christian experience” from his favorite theologian, Athanasius, as well as from Gregory of Nyssa. In chapter six, Habets discusses the resources within Torrance’s Trinitarian theology for a robust doctrine of creation and compares this favorably with the contributions of Wolfhart Pannenberg. And in chapter seven, Habets examines Torrance’s Christology and his claim that it was necessary for Jesus to assume sinful flesh in order to redeem humanity. Over the course of this final chapter, Torrance is helpfully brought into dialogue with fellow Reformed figures John Owen, Edward Irving, and Jonathan Edwards before Habets comes to the conclusion that his Christology could be strengthened with more emphasis upon the Holy Spirit’s role in the atoning life of the Incarnate Son.

If there is a weakness in the volume, it is the sixth chapter on Torrance’s doctrine of creation. The chapter, which is the shortest of the seven, is tantalizingly brief and leaves the reader wanting more. This reader in particular was hoping for hints of what kind of constructive project could be built upon Torrance’s Trinitarian understanding of creation, as well as how Torrance’s understanding that “creation is proleptically conditioned by redemption” (p. 146) informs his eschatology.

The book’s strengths more than make up for this minor disappointment, though. Habets’ conceptual grasp of Torrance’s theology and the helpful ways he contextualizes Torrance within the tradition of the Church—both Reformed and beyond—make this volume an excellent introduction to Torrance and to contemporary conversations around his work. The graduate student, the pastor looking for an introduction to Torrance, and the academic would all benefit from Habets’s constructive appraisal of Torrance.