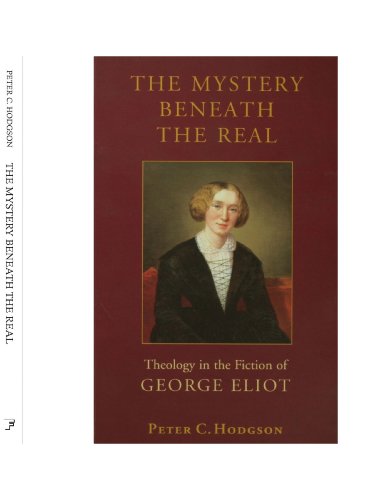 THEOLOGY IN THE FICTION OF GEORGE ELIOT

Literary critics who have written about George Eliot in recent years have tended to assume that ‘theological’ entails buying into a traditional, static worldview out of sync with our postmodern age. Their readings have ‘turned [George Eliot] into one of the modern “cultured despisers” of religion’, as Peter C. Hodgson observes (148). Hodgson’s Theology in the Fiction of George Eliot provides an illuminating and much-needed corrective to George Eliot criticism, which has for the most part dismissed the religious aspect of her life and writings. Hodgson’s George Eliot emerges as a deeply religious thinker, revising and reconstructing her religious beliefs in response to changing perceptions of reality in philosophy, science, and culture. According to Hodgson, her work anticipates a kind of critical postmodernist theology, which believes that,

in order to preserve the heritage and identity of the Christian tradition, its traditional forms must be allowed to pass over into new and often quite different forms … shaped by resources and insights presently available to us (152).

Hogdson’s breadth of theological knowledge enables him to situate George Eliot in relation to religious thinkers of her own time, as well as of the past and present. Following an introduction to George Eliot’s religious pilgrimage, chapters are devoted to each of her novels, with a concluding chapter on George Eliot and postmodern theology. According to Hodgson, George Eliot’s novels oscillate between a Hegelian philosophy of subject or spirit and a Spinozistic philosophy of substance—‘the two great options for thinking about divinity that have appeared in the history of religions in a diversity of forms: God as personal subject and as cosmic power or process’ (168). The first way of thinking is characteristic of the early novels, while the second way of thinking prevails in her later novels.

As a whole, her fiction addresses the central problematic facing postmodern theology: how do we speak meaningfully of God’s presence and action in the world today? According to Hodgson, George Eliot belongs to a long ‘anti-attribute tradition’ that goes back to Pseudo-Dionysius and Maimonides and appears again in contemporary Jewish theology such as that of Franz Rosenzweig, Martin Buber, and Emmanuel Levinas, and in recent continental philosophies of religion, such as those of Nicholas Berdyaev, Gabriel Marcel, and Paul Ricoeur. According to Hodgson, these theologies treat God’s concrete reality as unknowable, but allow for the possibility of an experience of God’s presence in the power that brings transformation and freedom from idolatrous attachments to finite and temporal objects in a not-yet-redeemed world.

Perhaps because recent George Eliot criticism has been dominated by feminist critiques, Hodgson does not discuss ways in which George Eliot’s theological revisions coincide with her feminist project to redeem woman’s role in the Christian story of salvation. More attention to this aspect of George Eliot theological enterprise makes possible new readings of characters such Hetty, the fallen woman in Adam Bede, whose transgressive sensuality challenges the dualistic antitheses of nature and grace, agape and eros, God and the world. Hetty’s suffering as a single mother turns her into a female Christ or Marian figure whose mystical theology finds its authoritative ‘texts’ in the experiences of the feminine soul as the birthplace of the living God. Hodgson’s more traditional reading Adam Bede finds in Hetty only the ‘doomed nature of self-centred characters’, and so recapitulates the split between the sacred and the secular that as Hodgson himself rightly points out, ‘George Eliot recognised as problematic, for it signalled the marginalisation religion’ (53–54).