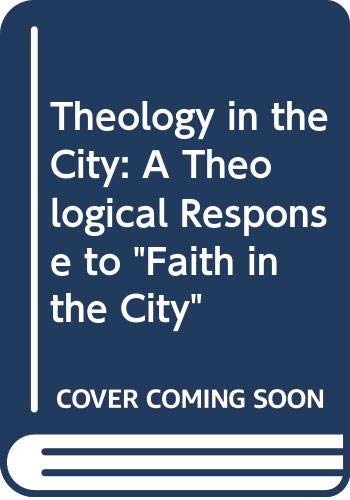 Most of the contributions to this book try in different ways to answer the chorus of complaints (to which this reviewer was party) about the inadequacy of Faith in the City’s theology. In his Introduction Anthony Harvey argues that much of this criticism was beside the point, for in clamouring so loudly for ‘traditional’ theology it quite failed to notice the ‘alternative’ theology that the report was offering. Instead of the academic, systematic kind, which claims a monopoly of truth, regards logical inconsistency between doctrines as a form of sin, and takes as its basic criteria the data of revelation and the established system of doctrine. Faith in the City proposes a lay theology, whose concerns are practical rather than theoretical, whose criteria are local, and which is therefore happy to countenance a plurality of theologies answering to a diversity of local situations.

Andrew Kirk argues along similar lines in Chapter One, though in a more cogent fashion which depends less heavily on a caricature of ‘traditional’ theology. His objections to the received theological model in the West are basically two: it has failed to respect the experience and theological insight of ordinary people, especially of the poor who are in a privileged position to hear the Word of God; and it has abstracted itself from its political context, ignoring the injustices which structure it.

Haddon Willmer follows with an imaginative contribution to the urban species of local theology, in which he criticizes the currently predominant ideal of political society, the shopping centre (the principle of the market), in terms of two classic alternatives: Jerusalem (the principle of a political environment which enables humanity) and Athens (the principle of active, participative citizenship).

In Chapter Three Andrew Hake offers some theological reflections on one of the pivotal moral concepts in Faith in the City: ‘community’. He affirms the church’s need to maintain its identity by responding to the demands of holiness and right belief, while stressing the church’s role as an instrument of God’s work of bringing about universal salvation. Elaborating this universalist theme, he goes on to make two important and controversial points. First, that although Christians look for the fulfilment of humanity in terms of being made into the likeness of Jesus Christ, such transformation need not occur through the church; and second, that since God’s universal sovereignty sanctifies what is common, the church should communicate in common language which is only implicitly theological.

In one of the more substantial essays in this collection, Raymond Plant starts to make good what he sees as a major weakness in the church’s response to the present Government and its policies—a weakness evident in Faith in the City: its failure to answer the New Right’s critique of the welfare state. His own reply comes in three stages: moral, empirical, and theological. In the first, he argues, inter alia, that even though the unequal outcomes of the market are not intended by any particular agent, they should still be considered unjust; that freedom should not be understood entirely in terms of the absence of external coercion by other agents; and that there should be statutory rights to basic goods. In the second, he provides statistical evidence that the ‘trickle-down’ effect of the Government’s market-based strategy has been to increase inequalities. And in the third, he presents theological grounds in support of social equality and for a conception of freedom in terms of the possession of basic economic resources.

In the fifth chapter Barney Pityana outlines another species of ‘local’ theology, one grounded in the experience of British black people. Here themes given voice by Harvey and Hake reappear: the starting point for theology is not Scripture or tradition but ‘people in their life-situations’; and the people of faith should be indistinguishable from the wider community, except in the ‘deeper spiritual understanding’ of witness and service that undergirds their participation in that community.

Finally, Dan Cohn-Sherbok seeks to counter Lord Jakobovits’ criticism of Faith in the City by offering an alternative account of Jewish social ethics. Instead of an ethic of liberation by self-help, he appeals to the exodus and prophetic and rabbinic traditions in support of one which emphasizes the duty of solidarity with the poor.

Theology in the City does go some way toward solidifying the theological grounds of Faith in the City, but it still leaves some crucial questions wide open. I shall mention four. First, granted that theology should take on local flesh, does this really mean that local theologies should be immune from criticism in the light of Scripture and tradition, and from the claims of theoretical consistency? In other words, does it entail an undisciplined pluralism? Second, granted that theology should be responsible to the moral demands present in its situation, must that responsibility always be direct, and is that situation and its demands adequately read in exclusively political terms? Third, granted that the Spirit operates redemptively outside the church, how then are we to understand the church’s role in God’s redeeming work? And fourth, granted that the church must avoid jargon if it wants to communicate what it has to say, how is it to say something different, something that might change the world, if it can only use common language commonly?