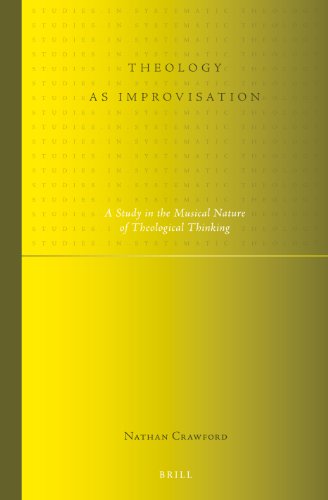 Theology as Improvisation: A Study in the Musical Nature of Theological Thinking

I was fully expecting to enjoy this book. I am a jazz musician, and have spent a good deal of time thinking about the relation of music in general, and improvisation in particular, to the nature and task of theology. And there is much in this volume to commend it. The author’s basic argument is that because of the great distance between God and mankind, rather than what he considers to be the totalizing or hegemonic tendency of traditional theology, attunement between the divine and the Christian is the best way to relate them. Along the way Nathan Crawford draws on many sources to build his case. He brings into the purview Martin Heidegger, particularly his articulation of the poetic, pre-Socratic, path to Being. He cites Derrida, claiming that his deconstruction project is something like attunement. My favorite chapter, the centerpiece, is his unpacking of improvisation itself, relying a good deal on Harvard musicologist Ingrid Monson, who has written extensively on jazz and other forms of improvised music. He then adds two chapters, one on David Tracy and the other on Augustine.

Crawford navigates through some turbulent waters. At the very end he helps the reader by summarizing his project with six themes which can be found throughout but which also need to be developed in the future. They are: (1) Attunement as a way of thinking theologically. Attunement is both active and passive, relating to God both by listening to Scripture and by recognizing the context we are in. (2) Theology is dynamic. The reason is that God is dynamic and beyond comprehension, so that not formulations but conversations are the best way to pursue “thinking God.” (3) Doing theology begins with a disposition. The best disposition is “openness” to others, being ready to change and doing justice to others. (4) Thinking God through evocation. The dynamic force for evocation is the love of God, which awakens us to reality. (5) Theology embraces formlessness. Crawford explains that the two central doctrines of creation and incarnation tell us of God’s desire to “open discourse to the reality of the infinite and incomprehensible.” (6) Finally, theology is enacted in an ethics of resistance. To what? To “totalizing forms of discourse,” which only lead to oppression, marginalization, and disenfranchisement of people groups.

If all this sounds rather vague, I believe it is because the way Crawford sets up the problem, and then the solution through improvisation, is (intentionally?) incapable of concrete application. At the heart of the problem is his inability to be sure of anything relating to God. He says it this way: “I do this [try to be thorough about God] while arguing that even the idea of the idea of God is problematic. . . . I feel the need to say something about God while, at the same time, arguing that we cannot say anything about God” (p. 4). Traditional theology has accomplished certain good things, but it is at best incomplete, and at worst (once again) totalizing. Crawford seems unaware that there is a third way between totalizing and being so open that we cannot know much of anything for sure. The consensus view, particularly in Protestant theology, has been that God has revealed himself to us in deeds, in theophanies, and, especially, in Holy Scripture. The result for us is that we can know him and the world truly though not exhaustively. The dreaded totalizing is answered, not by a postmodern meandering, almost gagging anything sounding like doctrine or ethical norms, but by a covenantal relationship with God, one which disallows the false humility of saying we cannot know anything for sure, but also the pretention of exhaustiveness.

I don’t want to take any cheap shots here. But there are occasional sentences that defy interpretation. “Now I act because I must act and when I act I do so in accordance with the other, having faith that the action opens the space for the other to be other” (p. 83). Either the sentence is simply sophism, or it so lacks in concrete application that we must guess what is going on. On the other end, we find a good many truisms spread about. “In order for the listener to be part of the performance, she must be tuned in to the performance and the music being performed” (p. 112). And then we find statements that border on the heretical: “The elusive nature of God is the fact that God is noncoercive and loving, not forcing God upon People” (pp. 31–32). Really? Is God elusive in his love? How does this square with Paul’s statement that God who did not spare his own Son will also graciously give us all things (Rom 8:32)? God is so vague in Crawford’s theology he goes to remarkable lengths not to allow anything specific to characterize the divine attributes. The annoying tendency to speak of “Godself” rather than using the masculine pronoun testifies to a typical tendency in neo-liberal theology to misunderstand why God is revealed with the masculine pronoun, not as an empty being. Of course, there is no gender in God. All revelation accommodates to some degree. But no doubt the masculine pronoun refers to God’s fatherly ability to engender a Son, not to some sort of masculinity, and certainly not to oppressive patriarchy.

What is really too bad is that the notion of improvisation can indeed be a helpful way to think of doing theology. Geerhardus Vos tells us that we are in the same historical instance as the apostles and the NT. Having been given the fullness of revelation in Jesus Christ, and with the authoritative interpretation of the revelatory material from the “fullness of time” by the NT writers, we as “end-time” believers (1 Cor 10:11) must use the same revelatory data as did those writers, albeit not infallibly. Even Kevin Vanhoozer’s theory of “theodrama” is too weak for Crawford, because there is too much emphasis on Scripture, an emphasis that “limits the forms available for thinking God” (p. 23). Curiously, Crawford does not interact with N. T. Wright, who, like Vanhoozer, suggests an ethic based on Act 5 in a great redemptive drama. Nor does he seem to know about Jeremy Begbie, who has spent much of his life articulating the analogy between doing theology and music-making.

So despite some valuable insights into the nature of doing theology, the book really does not achieve its promise. Besides the great theological difficulty of having a God who is so distant we can only try to get “in the groove,” rather than knowing what to believe, there is here also a fundamental misunderstanding of the nature of improvisation. The heart of improvisation is not “attunement,” but narrative. In jazz, we have a book, the song and its chords (“changes” as we call them). With firm obedience to a song’s fundamentals: melody, harmony, style, mood, etc., the musicians are then free to tell the story by developing the melody, by interacting with other musicians in accepted conventions (call-and-response, solos, “trading fours,” building to a climax, etc.). Improvisation is thus not doing what you feel like, or vaguely being attuned to the original. Rather, it is to continue to tell the story the original song proclaims. Similarly, doing theology is not trying to feel for God, but living-out the once-for-all revelation he has given us, following his directives and his parameters.

Theology as Improvisation is as good as neo-liberal Protestantism gets. Which, regrettably, is not very satisfying. And it is certainly not worth the prohibitive price of the book. Time to change keys!