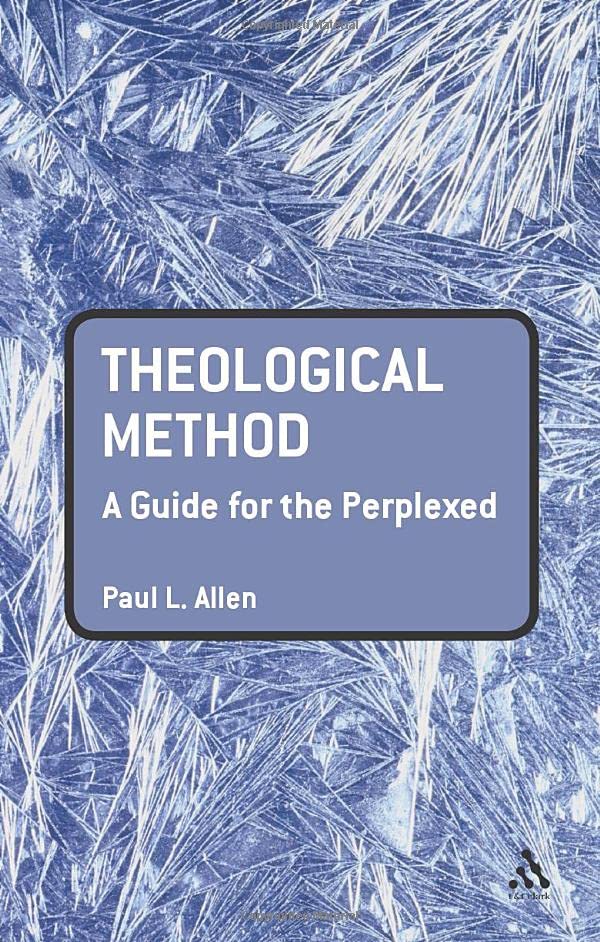 Theological Method: A Guide for the Perplexed

Paul Allen, Associate Professor in the Department of Theological Studies at Concordia University, Montreal, proposes to address two key needs of students who study theological method: a clear picture of the history of methodological developments in theology and an explanation of the prolegomena involved in these developments. These goals serve a third purpose of helping students make sense of a monumental work such as Bernard Lonergan’s Method in Theology, which appears as a periodic point of reference in Allen’s overview.

The survey begins with the Apostle Paul, whose theological method was “hermeneutical with regards to Israel’s scriptures and to Christ, while it is apostolic . . . with regards to the church” (p. 24), with Paul’s conversion experience constituting his methodological pivot. Allen demonstrates that a hermeneutical circle was operating within Scripture itself, though with Paul at least, this process was tacit and selectively based on Paul’s experience.

From the patristic era onward, Allen selects figures who embody salient features of theological method in each era. Irenaeus, Origen, and Athanasius illustrate the importance of lex orandi lex credendi (law of praying, law of believing) in the earliest centuries. Allen provides historical and philosophical background to familiar methodological moves such as Irenaeus’s “Rule of Faith,” Origen’s allegorical approach, and Athanasius’s emphasis on “communication of idioms.” This clarifies the soteriological significance of each approach, regardless of weaknesses or extremes that were involved.

Allen notes Augustine’s claim that “Christian doctrine has to do with two things: things and signs” (p. 74). Furthermore, he contends, “Augustine’s most important legacy is to establish the hermeneutic of love, made genuine through acts of goodness” (p. 79). Allen points out Augustine’s contention that faithful reading of Scripture depends on moral conversion, further illustrating the role of personal experience in early theological method.

From the medieval period Allen highlights Pseudo-Dionysius, Anselm, and Aquinas. Dionysian apophaticism is presented as a recognition of the limitations of human language to mediate knowledge of God, not as a wholesale denial of the possibility of such knowledge. Anselm represents “a much more confident understanding of the role of language in theological affirmations” (p. 96), with dialectic playing a central role in his principle of “faith seeking understanding.” Aquinas sees an even more direct correlation between revelation and reason. In contrast to other theologians considered, Aquinas posits a direct attachment of theological reflection to doctrine.

Under the heading “The Meaning of Sola Scriptura,” Allen considers Luther, Melanchthon, and Calvin. Luther opposed the division of theory and practice in theology, taking aim at “the abstract speculations of scholastic theology” (p. 120) and shifting the focus of theology from a “metaphysical ontology of God’s being . . . to a foundational ontology of relationality” (p. 123). Melanchthon attempted to bring a clear, systematic character to the rather unsystematic efforts of theologians like Luther. Among Calvin’s methodological hallmarks was an intentional rearrangement of doctrinal loci around soteriological concerns rather than nature as the organizing principle.

In “early modern theology” Allen focuses on Schleiermacher, Newman, Ritschl, and von Harnack. Each represents a distinct and often divergent approach to how history, tradition, epistemology, and human experience relate to the nature and task of theology. Allen quickly admits the limitations and risks of each approach, yet places them within the context of orthodox theological values, even if the overall thrust and consequence of their thought veered in other directions.

For the modern period Allen considers Bultmann, Barth, Tillich, von Balthasar, Rahner, and Schillebeeckx. Key issues marking this period were the relationship of faith and history (Bultmann), the identity of theology’s subject and object (Barth), the capacity of philosophical vocabulary for theological matters (Tillich), the role of creation and aesthetics in theology (von Balthasar), the significance of human questions as the starting point for theology (Rahner), and the place of understanding the gospel’s historical context in contemporary Christian engagement with culture (Schillebeeckx).

In addition to offering insightful material on the historical and theological context of each representative, Allen highlights methodological features that often go unnoticed. This allows for a fresh, if qualified, appreciation of those with whom there may be fierce disagreement. He shows how theology in every period responded to pressing concerns in an attempt to faithfully express the Christian faith.

Some evangelical readers will be disappointed that, though Allen does treat Scripture as authoritative, he does not understand the text (e.g., epistolary literature) to offer straightforward doctrinal content, at least not in any precise manner. Through multiple examples he argues that Paul was reflecting a particular developmental state in interpreting his own experience and not attempting to directly communicate doctrinal content.

Allen’s selection of representative theological figures does not include any after Calvin from the multifaceted world of “evangelical” theology. While it may have been his purpose to cover theologians whose method has wielded more ecumenical influence, the methodological influence of evangelical theologians from Carl Henry to Stanley Grenz has not been insignificant.

Overall, Paul Allen’s discussion of theological method admirably accomplishes his stated purposes. Depending on how familiar a reader already is with the subject it may or may not be experienced as “a guide for the perplexed,” but nonetheless it constitutes a valuable contribution to the growing literature on theological method.