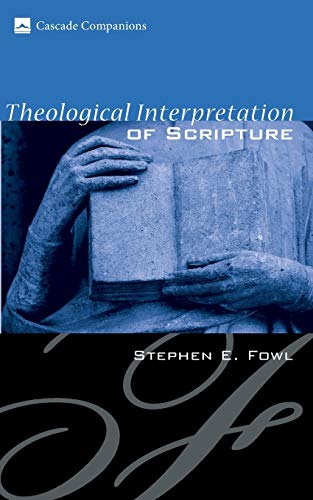 There is a “large and somewhat chaotic party” going on in the academy called the Theological Interpretation of Scripture movement. While much engaging and substantive conversation is taking place among the dinner guests, a recently arrived newcomer might only hear a cacophony of disparate disciplinary discussions and perhaps even the din of vitriolic rhetoric between competing approaches. In Theological Interpretation of Scripture, Stephen Fowl offers himself as a companion in order to rescue the bewildered reader in danger of spending the evening in a darkened corner, watching the theological theatrics from a comfortable distance. Having published a number of works in the field, Fowl is neither a stranger nor a neutral bystander in these debates. Accordingly, he recognizes that his presentation will shape the way readers encounter the crucial issues and that his companion represents one “interpretation” of theological interpretation.

Though the explosion of academic writing under the rubric of theological interpretation is fairly recent, believers have interpreted Scripture theologically throughout church history. Thus, one of Fowl’s goals for the book is to examine the relationship “between this long-running and essential Christian practice and this more recent body of scholarly literature” (p. x). Fowl’s guided tour of the movement comes in four main parts, and his last chapter provides a brief annotated bibliography that situates his approach in the larger discussion.

Chapter 1 examines the nature of Scripture and the role it plays in God’s drama of salvation. For Fowl, viewing Scripture in light of God’s triune being “recalibrates the relationships between God, Scripture and Christians” (p. 6). Scripture is “chief among God’s providentially ordered gifts directed to bringing about reconciliation and fellowship with God despite human sin.” Thus, Scripture is “holy,” because of “its divinely willed role in making believers holy” (p. 12). Scripture draws believers into relationship with God. Viewing Scripture as part of God’s economy of salvation allows the church to trust in God’s providential guidance in the formation of the canon “without diminishing [its] human, historical character” (p. 12).

Chapter 2 essentially puts a warning sign beside a number of issues that some have considered central to the movement. These areas of interest include historical criticism (pp. 15–24), biblical theology (pp. 24–31), OT studies (pp. 31–37), philosophical hermeneutics (pp. 37–40), theories of textual meaning (pp. 41–43), and issues of authorial intention (pp. 44–53). Fowl concedes that each of these concerns might have value on an “ad hoc” basis. However, for Fowl, a sustained concentration on these interpretive issues distracts the interpreter from the most important theological task. Because the goal of biblical interpretation is deepening communion with God, Fowl forcefully argues that these methodological matters “will not substantially advance the practice of theological interpretation” (pp. 14–15). For him, “there is a theological cost to be paid in letting hermeneutical concerns play a normative role in theological interpretation” (p. 51).

Chapters 3–4 represent Fowl’s distinctive vision for theological interpretation. Foregrounding the example of pre-modern interpretation, Fowl argues that contemporary interpreters must “relearn the habits and practices that constituted a flourishing pattern of theological interpretation in the past” (p. 55). Fowl also calls for figural interpretations that “will use a variety of interpretive techniques to extend the literal sense of Scripture in ways that enhance Christians’ abilities to live and worship faithfully in the contexts in which they find themselves” (p. 57). In addition to these interpretive techniques, Fowl argues that ecclesial practices must become primary pursuits (pp. 64–70). Acknowledging that there are certainly more, Fowl briefly highlights the practices of telling the truth, seeking reconciliation through repentance and forgiveness, and maintaining patience in the face of frustration. Rather than hermeneutical constructs, these habits are what will safeguard believers from bitter division and the temptation to interpret Scripture to justify sinful practices.

Many of the unique benefits of this slender volume are features of its function as a somewhat informal “companion.” Anticipating typical objections to this type of task, Fowl makes a modest claim for the book and acknowledges his particular viewpoint. Thus, he sees his volume as a complement to rather than a replacement of a work like Daniel Treier’s Introducing Theological Interpretation of Scripture. Fowl’s autobiographical sketch of his intellectual history is helpful in understanding the context and motivation behind his other major works in the field. There are also similar succinct historiographical snapshots of various approaches and movements throughout the book. For instance, his illuminating account of the rise and fall of the historical-critical method (pp. 15–21) represents the type of crisp analysis Fowl is able to provide in this format.

Fowl states rightly that others in the movement will take issue at various points along the path that he charts for his readers. Even as he emphasizes ecclesial practices and the ends of interpretation, some will remain convinced that he neglects a number of essential hermeneutical foundations. Fowl’s second chapter is by far the longest and most clearly adumbrates the differences between himself and the other guests at the party. To give one example, Fowl’s understanding of the “literal sense” is hotly debated. Some might wonder why a single literal sense could not do the things Fowl argues it is incapable of doing (p. 56ff). Can a multifaceted understanding of the literal sense not accomplish some of the interpretive “aims” Fowl highlights? Fowl calls for a figural extension of the multiple literal meanings of biblical texts, while some of his interpretation appears to resemble an application of the stable meaning of the texts he examines (e.g., p. 63). His formulations here will not be as palatable to those who are interested in the ends of interpretation but who are still concerned with connecting meaning more closely with human authors.

A final observation is that Fowl’s volume is a good example of the type of engagement he heavily critiques. At many points, Fowl downplays the importance of interpretive method and hermeneutical debate (e.g., pp. 36–37, 53). As noted above, he focuses on the “ends” of interpretation rather than the particular method used to discover meaning. Consequently, he rejects outright a focus on “general hermeneutics” (p. 39). There are many who will be much more reticent about dismissing the role of hermeneutics in the discussion. Though Fowl instructively points to the importance of the ecclesial context, one might wonder why hermeneutical discussion would necessarily be out of place in a church setting. Would not pastors and church members benefit from thinking critically about the “way they read” as they seek to become certain types of readers, informed by the theological and interpretive virtues? Why should pastors and disciplined church members not be welcome at the hermeneutical party? Perhaps the irony of Fowl’s engaging work is that his volume makes this very academic discussion readily accessible to those uninitiated in the conversation. Fervent disagreement over interpretive method does not always lead to bitter divisiveness. In fact, Fowl’s work is an example of the tone and level of discourse that will enable the dialogue to remain lively while preventing the “party” from turning into a brawl.