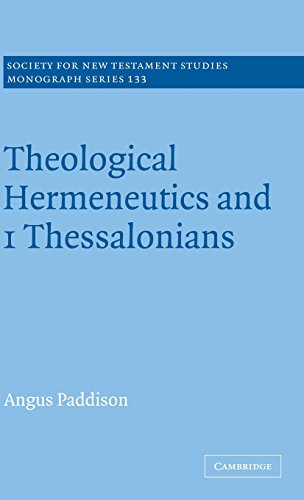 Theological Hermeneutics And I Thessalonians, SNTSMS 133

In this revised version of his doctoral dissertation at the University of Glasgow, Paddison presses beyond the Enlightenment impasse between biblical and theological studies calling into question the hegemony of historical-critical approaches to Scripture. Paddison takes special aim at historical particularity, original audience and authorial intention. These particular questions, and others related to them, reveal the attenuation of a ‘behind the text’ approach that does not take into account the canonical implication that the Scriptural text has a life after it has left the pen of its author (8).

Paddison identifies two leitmotivs that form the substantial force of his work. Firstly, a book like I Thessalonians is an apostolic book resulting in the text’s capacity to witnesses beyond itself to something deeper and greater. Secondly, the revelation of God in Christ is a profound well of meaning, and this is demonstrated especially in the church’s reading of Scripture. Paddison calls on an array of ecumenical, and sometimes obscure, interlocutors on whom he leans for guidance and support. Without doubt, it is Karl Barth’s theological vision and exegesis that provides Paddison with the primary theological framework for his approach.

There were a few points of divergence or confusion that arose in my reading of this work. To name two briefly: why was there no major interaction with the canonical approach of Childs? This approach would surely have been a helpful and clarifying voice for Paddison, and it would have been interesting to see the ways in which Paddison differs from Childs. And, two, the appeal to Paul’s lack of interest in the ontological concerns of patristic Christology is ironically, a historicist move that does not seem to take into account the texts continuing life. (To name a few, one calls to mind the work of Torrance, Yeago Bauckham and Bray, who have addressed the move from exegesis to theological formulations in the Patristic period.) Despite some of these quibbles, I will happily confess that research of this kind is the way forward for those who are deeply committed to seeing the iron wall that separates biblical studies form theological studies come tumbling down. Paddison is to be commended for his calling on Pauline/biblical scholars back to the subject matter of the text, namely, God’s revelation in the person and work of Jesus Christ. It is probably at this fundamental level of presuppositions and basic beliefs where the separation between a theological and a historicist approach to exegesis will diverge. However, the days of the hegemony of historical-criticism seem to be passing as indicated in Paddison’s fine work.