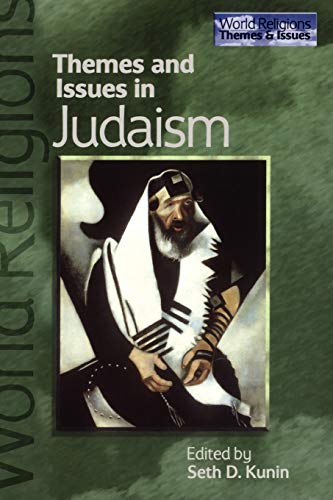 Themes and Issues in Judaism

This collection of essays adopts a phenomenological approach to key aspects of Jewish practice and belief. All are written by leading scholars who are practising Jews within some section of the diverse Jewish religious community. We might expect chapters on Jewish worship, Jewish rites and Jewish sacred writings; but we also have fascinating treatments of unexpected themes like sacred space, myth and history or attitudes to nature. Moreover, the titles of some chapters do not reveal the full range of their contents. For example, I did not anticipate perceptive reflections on Jewish views about free will and determinism in the chapter on making moral decisions. In short, there is a wealth of important insights to be gleaned by those with the patience to read through the whole book. The chapter on moral decisions is one of several which provide invaluable insights on the differences between Judaism and Christianity.

All the essays set out relevant biblical and rabbinic material, and make little attempt to conceal tensions or contradictions that may have emerged as the traditions have unfolded. To a lesser degree they also explain how these traditions have grappled with modern challenges (e.g. the rise of feminism, or contemporary ecological concerns). Often the writers helpfully point out where responses have varied and where this has given rise to different branches within Judaism. For the most part they have refrained from passing judgement on such developments. This makes for a comprehensive and sympathetic treatment, although at the same time it does downplay the controversy. Very few criteria, for example, are given for identifying a development that would undermine the Jewish tradition. But perhaps this observation relates as much to the character of Judaism as it does to this book.

The editor has prefaced the book with an important introduction in which he uses a structuralist framework taken from anthropology to give a holistic view of Judaism. He is at pains to affirm that he wants to employ a structuralism that allows for transformation rather than the static picture with which structuralism has often been associated. He believes that Judaism is best understood as a religion which works with sharp dichotomies and allows little scope for mediating elements. There is, for example, a clear distinction between Israel and the world, between Jew and Gentile. The Jewish religion has not been comfortable with intermediate categories—an observation that may help us to understand the difficulties of early Jewish Christians in accommodating Gentile believers. There is also a rigid distinction between the Creator and his creation—a feature which has interesting implications for the Christian doctrine of incarnation. The editor also suggests that the divisions within Judaism in the modern era reflect something of a breakdown in the old dichotomies and a greater readiness to accept mediating categories.

Kunin’s analysis, which also forms the basis for his own first chapter on sacred space, is the most difficult part of the book, especially for those unused to anthropological ideas. Fortunately it is not necessary for an appreciation of the other essays, and Kunin himself suggest that readers should feel free to bring their own perspectives to the material in the different chapters.

In spite of the diverse authorship the book does successfully convey the ethos of Judaism, though there is a tendency to minimise the fragmentation in contemporary Judaism. Anyone wanting to grasp the character of Judaism would gain much from reading the whole book. I will also be using it as an insightful reference work on the main areas of Jewish practice or belief.