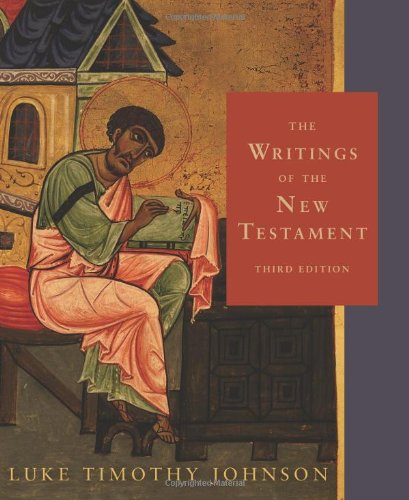 The Writings of the New Testament: an Interpretation

This book has won me over. My first impression was of yet another ‘Introduction to the New Testament’, expanded by the addition of some material on the historical, cultural and religious setting of the early church. As such I expected it to be worthy but unremarkable, and the introduction fuelled my fears, as the author talked, as I thought, rather pompously about the failings of earlier introductions and the need for a new approach by way of an ‘experience-interpretation model’, seeing the growth of the NT within the ‘symbolic world’ (which seemed to mean simply ‘culture’!) of first-century Judaism. A glance at the table of contents, with its apparently traditional book-by-book account of the NT writings, suggested to me that all this was just pretentious verbiage, and that nothing had really changed.

I wish to apologize to the author for jumping to such unjustified conclusions. I suggest to other readers that rather than starting with the introduction, they should first read the author’s ‘ten theses on the canon’ (pp. 544–547). There you will find an approach to the study of Scripture which, while it in no way wishes to dispense with critical scholarship, keeps it firmly in its place. The Bible is the church’s book, and its study must take place within the life of the church, not as a detached academic pursuit. There are strong echoes here of Brevard Childs’ ‘canonical’ approach to Scripture. It breathes an air of wholesome, reverent, appreciative attention to the text, in order to learn from it rather than to ‘explain’ it. The whole is bathed in healthy Christian common sense. If this book is, as I believe, an indicator of the way biblical scholarship is moving away from arid analysis of sources and composition towards a desire to let the text speak for itself, then we have a lot to look forward to.

Before turning to the books themselves, Parts One and Two introduce us to ‘The Symbolic World of the NT’ and ‘The Christian Experience’. These cover roughly what we have been used to calling ‘NT background’ and ‘Christian origins’. The former is fairly traditional; the latter more impressive in its attempt to do justice to how and why the Christian movement ever got off the ground in the first place. A whole chapter is devoted to the resurrection of Jesus as the essential foundation of Christian faith, not just as an idea, but as something which really happened. The growth of the Jesus traditions towards the writing of the NT books is then discussed in a way reminiscent of Moule’s Birth of the New Testament, i.e. one which treats first-century Christians as real (and believing) people in a real world, not as mechanical manipulators of fragmentary sources.

Nearly 400 pages are then devoted to going through the 27 books one by one. But very little of this space is used on the usual literary critical questions of date, authorship, etc. It is, for instance, a bit of a shock to find that of 100 pages on the Synoptic Tradition the ‘Synoptic Problem’ takes up only one (and then without attempting to solve it, or even apparently regarding a solution as terribly important!). Questions of authorship and date are not ignored, but generally despatched very briefly. There is no discussion of other scholars’ views by name in the text, and there are no footnotes. Each chapter has instead a concluding ‘bibliographical note’ which gives a survey of scholarship available in English (predominantly American).

The aim is rather to get straight to what the text actually says, and to deal with introductory matters only in so far as they are important for understanding it. The approach to the individual books is sensibly varied. Where the reader will be helped by a running commentary on the development of the argument, this is offered (most helpfully in Romans, where 18 of the 22 pages are devoted to a full and sensitive tracing of Paul’s argument). In other cases it is more appropriate to focus on themes and characteristics of the book. The differing character of the books is allowed to set the agenda, and the result is a responsible and stimulating attempt to let the reader listen with deeper appreciation to what the book wants to say. The book really is, as it claims, an ‘interpretation’ rather than a critical introduction.

On one area of traditional introduction, however, Johnson has rather more to say. He is not happy with the increasing assumption of widespread pseudepigraphy in the NT. Not that he has any dogmatic reason to defend traditional authorship in every case. But he sees much traditional critical argument in this area as too artificial, not sufficiently open to the real-life possibilities of authorship in the first-century church. He takes the complexities of possible methods of composition very seriously—co-authorship, amanuenses, etc.—but concludes that ‘the whole Pauline corpus is one that Paul “authored” but did not necessarily write’ (p. 257); and that includes the Pastorals (or, as he prefers, ‘Letters to Delegates’). The general methodological remarks on this subject (pp. 255–257), together with his remarks on each of the disputed books, would provide wholesome food for thought and ammunition for those who are not prepared to accept bland dismissals of traditional attributions of authorship. The discussion of the letters to Timothy and Titus is particularly interesting in his refusal to treat the three as an undifferentiated whole, in regard to either authorship or character.

Throughout the discussion of the individual books good things abound: arresting new insights, round dismissal of some corny old critical shibboleths, and above all a sensitivity to the literary character and message of each distinct book by someone who ‘loves these writings’. The whole book is a breath of fresh air.

It is a very big book, perhaps too big for the non-specialist to venture into, and yet too thin on traditional technical discussion to satisfy the specialist. As a text-book for theological students it requires a different sort of course from what is still generally to be found in our theological faculties, a course which treats the NT as Christian literature rather than as documents for historical-critical analysis. Perhaps it may encourage change in that direction. At any rate, it is a book we should all be aware of, and one which offers much cause for hope.