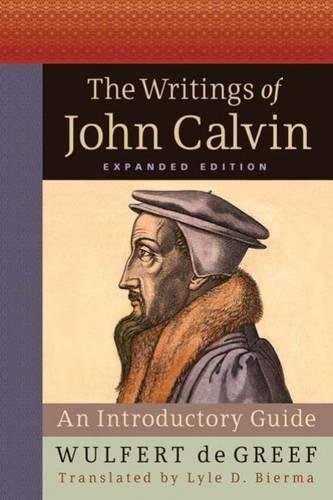 The Writings of John Calvin. An Introductory Guide

This book is a translation from a Dutch work originally published in 1989. It is precisely what the title suggests, ‘an introduction’ to Calvin’s writings. The author begins with a brief survey of the major events of Calvin’s life and career in order to provide the necessary background for the discussion of Calvin’s publications which comprise the remaining two-thirds of the book. Although one might question why the author chose to emphasize some subjects and neglect others in the biographical survey, neglected subjects, such as Calvin’s dealings with Servetus, are dealt with in considerable detail later in the work. The book concludes with an extensive bibliography of both primary sources and secondary works.

Calvin’s writings are surveyed in a series of chapters which portray him in the fourfold role of theologian, exegete, polemicist and minister. The chapters are organized both topically and chronologically, beginning with Calvin’s early humanist publications. Other chapters are devoted to works dealing with the Bible, treatises on church structure and order, polemical works, the Institutes, miscellaneous publications and correspondence. Although the volume was not intended to present new insights or interpretations, we are regularly reminded by Calvin’s own statements how often he has been misrepresented both by his detractors and his admirers. For example, those who believe Calvin was a pompous bigot who delighted in polemics will find it difficult to reconcile that view with his approach to the Scriptures. In his Commentary on Romans he includes comments on the criteria for a good commentary. Because, Calvin maintains, God has not given any one person insight into all his truth, exegetes will not always agree. They should, therefore, approach their task humbly and avoid polemics. Those who have read Calvin’s commentaries know that they are particularly useful, because Calvin concentrates on making clear the original meaning of the text rather than on using the text for extensive dogmatic commentary. This was another of Calvin’s criteria for a good commentary.

Calvin’s treatises reveal him as a peacemaker and provide a corrective to those who would identify his teaching with mat of Ulrich Zwingli. Maintaining that the devil had stirred up the controversy over the Lord’s Supper in order to ‘impede the advance of the Gospel’, Calvin criticized both parties at the Marburg Colloquy. ‘Both sides erred … in that they did not listen to each other patiently and were not really committed to finding the truth together’ (p. 135). Although Calvin could not accept Luther’s belief that Christ’s body and blood were enclosed in the bread and wine, he insisted that we partake of Christ in the sacrament in a unique way ‘by the secret and incomprehensible power of God’ (p. 135). He also believed that the sacrament should be celebrated every Sunday. However, the city council revised his articles on the organization of the church to adopt the Zwinglian practice of celebrating the Lord’s Supper four times a year. Calvin also differed from Zwingli in his appreciation of the place of music in public worship, maintaining that it is a gift of God which, when adapted to a worship setting, is suitable for public worship.

Dr de Greef has produced an important guidebook which will be much appreciated, especially by the novice in Calvin studies. Students of Calvin should, therefore, be grateful to the publisher and to the translator for making this valuable book available in English at a reasonable price.