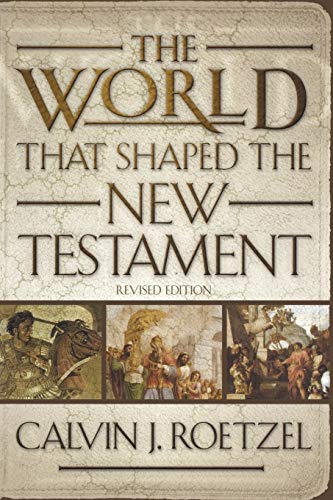 THE WORLD THAT SHAPED THE NEW TESTAMENT (REVISED)

The market for introductions to the world of the NT is competitive. There are many accessible options, any of which should be supplemented by the particularly useful IVP Dictionary of New Testament Background. Roetzel’s revision of The World that Shaped the New Testament is prompted by advances over the last twenty years in our understanding of the world in which Christianity was born. An introductory work is necessarily selective; this book devotes more space to the political and religious than the social and cultural; and it seems to me that his principal contribution is on the religious heritage of the first century. In contrast, there is very little discussion of social status, slavery or the domestic scene.

The book opens with a focus on Alexander and his legacy of hellenisation, followed by the eventual rise to supremacy of Rome. Jewish resistance and revolt, initially in relation to Hellenism, but later towards Rome and its 70 CE siege of Jerusalem, are described in this context.

The second chapter turns to the religious climate which dominated this world, including an overview of the Pharisees, Sadducees, scribes Essenes, Qumran community, and zealots. Neither are the Graeco-Roman elements of religion ignored: the mystery religions, hellenistic philosophy and the imperial cult (although this last section should be read together with the section on ‘Hellenistic Kingship’ in a later chapter) are all described in brief. (A description of Platonism and Epicureanism would also have been apposite.) Especially helpful is the highlighting of the encroaching syncretism within the diaspora synagogue communities between Jewish and Hellenistic values.

The next chapter describes key ‘institutions’: namely the temple, synagogue, household and Greek city. (A fuller account might have devoted additional space to the more overtly Roman cities, such as Philippi, Corinth and the imperial capital.)

The two remaining chapters are particularly useful in that they turn to important issues which are often ignored. The first of these is an overview of how the OT Scriptures were interpreted in the rather later Hellenistic climate of the NT period. The focus here is the Septuagint, Philo, the Qumran community, and the Rabbis. In the final chapter he looks at first-century understandings of the battle between good and evil, the world of demons and those who exercised the power to heal.

Each chapter includes brief references to NT texts which exemplify what has been discussed. The book is a lucid digest and portrait. It is weakened, however, by its limited coverage of primary and secondary sources. It does not, for example, provide a guide to primary sources and their use. Indeed, the student who needs to provide reference to such sources, especially the non-literary papyri of the non-elite and the inscriptions, will need to look elsewhere.

Additionally, the book does not clearly direct students to further academic sources. It not only lacks a bibliography, but also, confusingly, it combines into a single index both a list of subject and a limited selection of those authors who are cited in footnotes. It might have been useful to have included a brief ‘further reading’ list. Furthermore, there are points at which the extent of scholarly debate is occluded, for example, the statement that ‘[s]cholars have taught us that’ the Pastoral Epistles derive from a mid-second century context; and, the implication that there is no ambiguity in the reference to the apostle ‘Junia’ as female. Given these provisos, it is important to note that, while providing a helpful starting-point for the student studying the background of the NT, it should be supplemented by other sources which offer the necessary detail and supporting evidence.