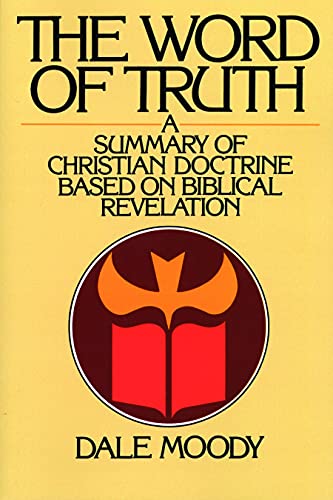 The Word of Truth: A Summary of Christian Doctrine Based on Biblical Revelation

Written by Dale Moody Reviewed By Bruce A. Demarest
Doctrine of Scripture and Homiletics

The widely published author of this new attempt at a systematic theology is Senior Professor of Christian Theology at the Southern Baptist Theological Seminary, Louisville, Kentucky. An Oxford DPhil with many years of teaching experience, Moody divides his book into the traditional divisions of systematic theology: prolegomena, revelation, God, creation, man, sin, salvation, Christ, church, and consummation.

Beyond the traditional format the work is marked by a fresh stamp that sets it apart from other theologies. The author interacts extensively with philosophical and scientific perspectives pertinent to each doctrinal issue. He likewise provides an illuminating historical survey of positions adopted by the church, including the much overlooked Eastern churches. Finally, the author attempts to expound Old and New Testaments while dialoguing with the results of modern biblical criticism. The breadth and depth of the author’s treatment of matters philosophical, historical, and exegetical is indeed impressive. Few theologians demonstrate such learning over the entire spectrum of biblical and related studies.

This does not mean, however, that the reader will agree with all of Moody’s conclusions. Indeed, in adopting a critical stance vis-à-vis the Scriptures, Moody challenges a number of traditional Christian positions. For example, in stressing that revelation is a largely historical event and ‘I—Thou’ encounter, Moody appears to lose sight of the propositional dimension of the divine disclosure. Likewise he views inspiration primarily in terms of the biblical writer rather than the enscripturated document and in this regard he falsely charges the Reformers of positing a rigid dictation theory of biblical inspiration.

In discussing the created order Moody enveighs against traditional literalistic interpretations of Genesis that posit the ex nihilo creation of a perfect world in the beginning. Aligning himself with ‘evolutionary orthodoxy’, Moody prefers the position of ‘continuous creation’ whereby Genesis 1:1–2:4a is seen as a cultic celebration of creation, rather than an objective description of cosmic and human origins. From a source critical point of view, the ‘JE’ creation account (Gn. 2:4b–7) is said to advance a theology markedly different from the preceding ‘P’ source.

Moody’s treatment of man proves to be twice as long (100 pages as opposed to 48 pages) as his discussion of God (theology proper!). Allegorizing the Genesis creation accounts, Moody commends the view of Niebuhr and others that the Adam of Genesis 1–3 was not an historical person; rather Adam is a rich symbol of ‘Everyman’ who has ever lived (i.e. ‘Collective Adam’). Not unexpectedly he decries the ontically orientated interpretations of the imago Dei in man in favour of the functional view of man’s appointed dominion over the earth (Old Testament) and the personalist view of reciprocal love (New Testament).

In his discussion of sin, Moody launches an attack against ‘the archaic barnacles of Augustine’s fifth-century’ soteriology (clearly he has little love for the classical Reformed position). Moody firmly denies that Paul or anyone else taught that Adam and Eve’s transgression brought sin and guilt upon the entire human race. Each person is culpable before God not by virtue of the fall of our first parents, but because each succumbs to the space-time enticements of sin. Why every man and every woman chooses sin rather than virtue Moody does not adequately explain. Whence cometh, we ask, the sinful tendencies that lead to actual transgressions?

Consistent with the foregoing Moody finds little common ground with the Augustinian-Calvinist soteriology. The Reformed notions of election and effectual grace allegedly undercut all human responsibility and freedom. Moreover, the forensic focus of justification expounded and ably defended by Leon Morris is rejected in favour of the ‘dynamic’ view that defines justification as the righteous obedience of faith. The latter view, advocated by V. Taylor, allegedly frees the Christian from the bondage of an old legalism. Lastly, Moody argues that believers that fail to abide in Christ may apostasize and forfeit their salvation. Here faulty exegesis prevails, for many of the texts Moody adduces pertain to unbelievers or to Christians who stand to lose their heavenly reward.

Again following the lead of modern critical opinion, Moody pursues a Christology ‘from below’ and examines the work of Christ before introducing the reader to his person. Support for the assertion, ‘Jesus is truly God’ derives largely from the testimony of tradition (e.g., the classical creeds). The New Testament, however, primarily depicts Jesus as ‘the Man for others’ and ‘the Man for God’. But what about the all-important Philippians 2:6–11 hymn? Moody argues that the traditional kenosis model, whereby the Logos laid aside independent use of certain attributes to become a man, must be rejected in favour of the skenosismodel. Here following Thornton, Knox, and Pittenger the author perceives Christ in terms of the gracious indwelling of the Spirit of God in a man. Jesus, on this showing, becomes the special instrument of the divine working in the world. Echoing certain liberal emphases, the unity that exists between Jesus and God is a unity not of being but of purpose and love. And this Moody, in an obvious historical lapse, describes as ‘Chalcedon in a contemporary setting’!

In the area of eschatology Moody rejects the dominant amillennialism of his own Southern Baptist tradition and affirms a form of historic premillennialism (and post-tribulationalism) similar to that of G. E. Ladd. This particular section contains valuable surveys of eschatological opinion.

In sum, The Word of Truth contains highly perceptive philosophical analyses, illuminating historical surveys, but exegetical treatments which here and there are less than reliable. Moody seems to be obsessed with the fact that the truth can be ferreted out only by the most ruthless application of modern scientific biblical criticism. Hence the sanctified judgments of competent scholars who happened to anetdate the rise of modern science and biblical criticism are largely dismissed. Anyone who turns his back on the ‘assured results’ of modern biblical criticism is by definition a mediaeval Catholic or a scholastic Protestant.

If the heroes of this work are critical scholars such as J. Baillie, Pittenger, Macquarrie, sundry process theologians, and existentialists, the villains are ‘the deviations of Dispensationalism’, the ‘false teaching’ inherent in the New Scofield Reference Bible, and ‘the widely read fantasies’ of Hal Lindsey. One could wish that Moody’s criticisms of persons and positions with which he disagrees were presented in a more even-handed and objective fashion. Still this is a scholarly and informative work that belongs on the shelf of every serious student of Scripture.

The emergence of the doctrine of the incarnation

by Ernest Lucas
VIEW ALL VIEW ALL

God in Control, An Exposition of the Prophecies of Daniel

Paul the Apostle: The Triumph of God in Life and Thought