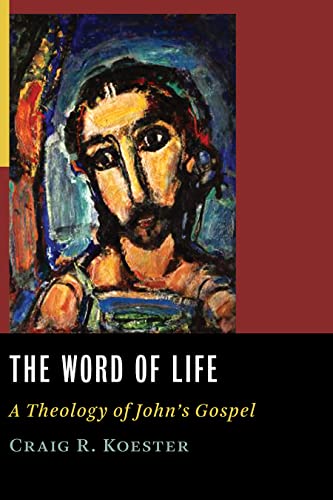 The Word of Life: A Theology of John’s Gospel

Readers may already be familiar with Koester’s recent work on John’s Gospel, published in various specialist journals. Building on the author’s ongoing encounter with John, the present book reflects his interaction especially with three constituencies: recent Johannine scholarship; witnesses to the Fourth Gospel’s wider impact down the centuries; and contemporary readers generally and their responses. Koester is fully conversant with historical questions, but they are not his focus; neither the origins of Johannine theology nor what may be reconstructed of its own development concern him here. Instead, he undertakes “careful theological work with the present text” in order to provide non-specialists in particular with “a sustained discussion about major aspects of John’s theology” (pp. x–xi). With this intended readership in mind, Koester has put everything extrinsic to his argument in endnotes; love them or hate them, in this case they do the book a real favour by allowing the discussion to flow uninterrupted.

The study begins with a very useful introduction to all things Johannine. There is a well-known balance in this Gospel between the preservation of the Jesus tradition and its interpretation for the first readers. Koester accounts for this through its post-Easter perspective of life in the Spirit, whereby the question of who Jesus iseverywhere impacts the narrative of who he was. He goes on to offer a thoughtful digest of some key theological questions that have either arisen from reading John or been brought into dialogue with the text by readers. Finally, Koester outlines three intentions of the study (which he approaches theologically): identify what the Gospel takes for granted, specify the perspective it seeks to promote, and consider what we are to make of it.

Koester then sets about exploring seven topics: God; the world and its people; Jesus; crucifixion and resurrection; the Spirit; faith, present and future; and discipleship in community and world. At first sight these include major elements of the Fourth Gospel but do not provide an exhaustive list of its theological materials. However, in some cases the catch-all title conceals the nuanced correlation of significant themes which Koester in fact provides.

For instance, “The World and Its People” brings together various perspectives on the human condition. Koester considers in detail not just what kosmos means or what human life means (seen in relation to Christ and to God), but also the entities and forces that endanger true life, namely, suffering and death, sin (involving unbelief) and evil (including the satan). He also considers human freedom as the opportunity for relationship with God through faith.

Another example is the chapter devoted to Jesus. Koester explores Jesus’ relation to God as Sender and as Father in the opening chapter on God, and he reserves some other important issues for the chapter on Jesus’ crucifixion and resurrection, including how his death reveals divine glory or how his resurrection (and therefore status as living One) implies relational questions for any reader. The Gospel’s protagonist is, of course, never far away in any of Koester’s topical discussions, but the title suggests that this chapter, at least, will bring John’s portrait of Jesus into sharp focus. Essentially, this study of Jesus tries to follow the path of discovery taken by the other characters in John’s Gospel; Koester does not begin, therefore, with the prologue but examines various distinct facets of Jesus’ identity as they emerge from 1:19 onwards. He is first of all human being and teacher, since this is uncontroversial for all who meet him (as it still is for all who have an opinion about him). He is also prophet and messiah, aspects which provoke conflict in the story because they capture crucial but disputed elements of his divine vocation. And most controversially, he is Son of God (and, with the prologue, Word of God), with all that is implied in terms of exercising divine power and mediating divine presence. All of this is a staple enough diet of Christology, yet by following the Gospel’s own narrative logic for his presentation the author manages to preserve engagement with the text and, therefore, with John’s (as distinct from Koester’s) Jesus.

If I were a publisher, I might slightly amend the sub-title of the book to A Theological Reading of John’s Gospel. I would do so, not because Koester fails to write a credible and accessible theology of John (for he succeeds rather well), but because he also engages in reading John’s Gospel theologically and because this may, in fact, be his main achievement in this book. Koester, it seems to me, rather self-effacingly manages to let John speak with the theological profundity that characterises this Gospel, and speak for today; The Word of Life is as good an orientation to John’s Gospel as I have come across.