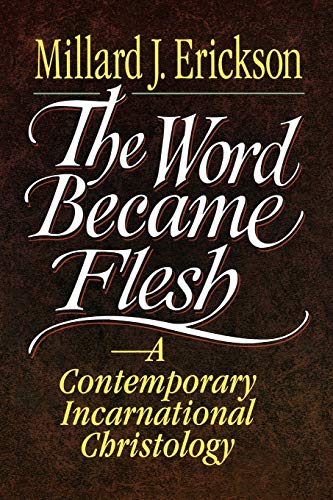 The author’s goal is to develop an ‘orthodox incarnational Christology for our time’ (p. 13). To accomplish this task, he has divided the book into three parts. The first part deals with the biblical sources for this Christology and the various formulations offered by Christians before and after the Council of Chalcedon. While this review is useful, it essentially covers the same material that is available in other books on Christology.

The second part is concerned with ‘Problems of Incarnational Christology’. He defines these problems as historical, sociological, metaphysical, anthropological and logical in nature. With respect to each problem, Erickson analyses the views of leading theologians that disagree with the Chalcedonian formulation and offers an evaluation of their response to the problem under consideration. The range of views that he covers is impressive, and he argues for the Chalcedonian position with great skill.

The third part is devoted to the ‘Construction of a Contemporary Incarnational Christology’. He begins by discussing the reliability of the historical evidence for Jesus, Jesus’ own testimony and the NT witness to his deity, and the uniqueness of Jesus’ resurrection. After these preliminary chapters, he presents his own contemporary Christology.

The three chapters devoted to this presentation are the heart of the book. One can profitably read these chapters without reading the rest of the book to gain an understanding of his Christology. In fact, it probably would have been more beneficial, in terms of the author’s goal, if these chapters had been expanded and published separately. The preceding chapters are useful for a person who has little knowledge of the subject, but they are more an apologetic for the Chalcedonian position than a further expansion and discussion of it.

In developing his Christology, Erickson contends that there is a metaphysical basis for the incarnation that must be understood in order to develop a contemporary Christology that preserves the content of the original biblical revelation. The metaphysics he endorses is a ‘contingent dualism’ and a ‘type of idealism having common grounds with realism, particularly critical realism’ (pp. 525–526). ‘God created, bringing into existence the material world. At that point reality became dualistic. This is a contingent dualism, however, for although God exists necessarily (i.e., he cannot not exist), all of the creation exists only contingently’(p. 525). In this metaphysics, ‘the key to understanding this whole scheme is to realise the special status and role of persons. For the supreme person or self, God, completed his creative work by bringing into existence finite persons, that is, humans’(p. 526). Sin disrupted the relationship between God and human beings, thus necessitating the incarnation (p. 527).

The incarnational Christology that Erickson offers is a ‘species of kenotic theology’ (p. 551). Using Philippians 2:7 as his text, he concludes that what God did in the incarnation ‘was to add something to each nature, namely, the attributes of the other nature … what he emptied himself of was his glory, nothing being said about giving up any attributes of deity, either essential or accidental.… He still had divine attributes, but they now were exercised in connection with the humanity which he had assumed’ (p. 555).

In this incarnation, ‘Jesus was a divine-human person who had both a complete human nature and a complete divine nature.… The exhaustive knowledge of all truth which the deity of Christ possessed (his omniscience) was in his unconscious.… The infinite knowledge possessed by his deity was accessible to him, not when his divine nature permitted access … but when the Father permitted access’ (pp. 558–559).

Erickson believes Jesus possessed the ability to do all things, but had that ability latently. He concludes that ‘Jesus could have sinned’, but if he did, ‘his deity could not have been involved … the incarnation would have terminated short of the actual sin … the Second Person of the Trinity would have left the human nature of Jesus, dissolving the incarnation.… Had the Logos departed, Jesus would not have died.… Rather Jesus would have survived, but would have “slumped” to mere humanity, and sinful humanity at that’ (pp. 563–564).

Concerning the death of Jesus, Erickson uses a ‘contingent monism’ to describe death itself as ‘transition from one state to another. This is not extinction or the end of life, but only the end of one kind of life’ (p. 565). He concludes, ‘Given this understanding, death is not a real problem for the deity of Christ, for it is simply a transferring of the person to a condition even more like abstract deity; and thus the death of Christ becomes, if anything, easier to maintain’ (p. 565).

Regarding the resurrection of Jesus, Erickson offers a ‘two-stage exaltation’. In the first stage, ‘the resurrection body of Christ was as it appeared to his disciples. It transcended many of the laws of nature, yet it still possessed some of the characteristics of the body of his earthly life. The ascension, however, completed the transformation. The body which he now has is the completely glorified body, free from the weaknesses and immune to the temptations of this world’ (pp. 574–575).

These are the essentials of Erickson’s Christology. He argues cogently for his position, interacting with the views of Stephen T. Davis and Thomas V. Morris to develop his presentation. He uses some of their insights and combines them with his own to offer a Christology that addresses some of the problems encountered by evangelicals today when they present and defend the Chalcedonian formulation.

Overall, Erickson’s presentation is persuasive for evangelicals to use in their articulation of an incarnational Christology. It would have been helpful, however, to spend more time discussing the implications of what he has proposed. For example, while he finds in Morris’ view a ‘tendency toward Nestorianism’, Erickson is not immune from similar criticism. Though he rejects Morris’ ‘two-minds theory’ (p. 558), that Christ had two minds, one divine and one human, the theory seems to be affirmed by his own statements on the possibility of Christ’s sinning. Erickson asserts that the Second Person of the Trinity would leave the human nature of Jesus rather than allow a sinful act to occur. Jesus would remain alive, however, as the Second Person departed. From these statements, it is possible to interpret his Christology as a modified form of Nestorianism with a hint of Appollinarianism using the terminology of kenotic theology. Given the brevity of his presentation with regard to these implications, this is what some readers might infer.

The final two chapters of the book discuss the relevance of the Chalcedonian formulation for women and oppressed groups in general, and the problem of evil and the incarnation. Both chapters are useful contributions to the discussion as restatements of standard evangelical beliefs.

Overall, the book is beneficial for those who want an analysis of the current discussion of Christology from an evangelical perspective. It provides some useful insights for this discussion and should stimulate further thinking on some of the problems connected with adherence to the Chalcedonian formulation.