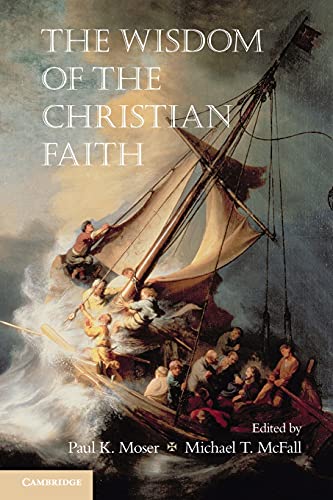 The Wisdom of the Christian Faith

Though nowhere mentioned in the text, the cover of this collection of essays is an appropriate illustration of this book’s intended purpose: it is Rembrandt’s The Storm on the Sea of Galilee, and it depicts a gale-buffeted fishing boat with nine disciples pulling sails, clinging to the mast and ropes, and turned outward in despair toward the sea. In the bottom corner of the painting we find three disciples turned to Jesus in supplication.

The Wisdom of the Christian Faith is the first book on the philosophy of religion to be written entirely by philosophers engaging themes of wisdom in the Christian tradition. In many of the essays the method used is to present leading contemporary philosophical accounts of the topic in question, and then to contrast, contradict, or refine them in the light of the Christian faith. The background assumption could be that contemporary philosophy of religion has spent too much time pulling at the sails and too little time turning toward Christ, a theme that resonates with much of Paul Moser’s recent work. As Moser claims in the introduction: “Western Philosophy has tended to occupy itself with analyzing and debating concepts and propositions. In contrast, cruciform wisdom attends to the kind of divine power exemplified in the crucifixion and resurrection of Jesus, and then welcomes and conforms to it” (p. 8).

The collection includes essays by Paul Gooch, Merold Westphal, William Wainwright, John Hare, Andrew Pinsent, Sylvia Walsh, Gordon Graham, Robert C. Roberts, John Cottingham, Charles Taliaferro, Paul Weithman, and Jerry Walls, with an introduction by Paul Moser and Michael McFall. Space prohibits commenting on every essay, so I have chosen a few that best represent what I take to be the collection’s purpose.

John Hare’s essay “Forgiveness, Justification, and Reconciliation” provides a compelling account of the nature of sacrifice that he then utilizes to examine God’s forgiveness. By means of two concepts he has developed elsewhere, “the moral gap” and “the evaluative contagion,” Hare seeks to make the sacrificial system—and the doctrine of atonement to which it is intrinsically linked—intelligible to modern ears. Having argued for a clarified account of sacrifice, he then applies it to the doctrines of atonement, justification, and reconciliation. In spite of the protestations regarding his own “theological naivety,” Hare’s essay makes deft use of theological resources, navigating between Scotus and Anselm, John Calvin and David Kelsey, Colin Gunton and N. T. Wright. Though he notes that some of his claims are controversial—as most interesting claims are—readers looking for a persuasive account of imputation and atonement that challenges modern Kantian shaped intuitions will find one here.

In “Wisdom and Evil,” Andrew Pinsent explores how Solomon, unsurpassed in wisdom and achievements, could have possibly gone wrong, and how it is that one can be supremely wise and yet subject to damnation, as is the case with Aristotle’s depiction in Dante’s Inferno. Utilizing Aquinas’s modification of classical virtue ethics and contemporary social cognition studies, Pinsent distinguishes between wisdom as a virtue and the gift of wisdom. Although both the virtue and gift of wisdom pertain to divine things, the mode of operation of the gift differs in that it entails an intimate union of the soul with God and a participation in God’s stance toward divine things (p. 109). Thus, cases such as Solomon or Dante’s Aristotle may exhibit immense amounts of the virtue of wisdom, but lacking the gift, fall into ruin.

Robert C. Robert’s contribution, “Unconditional Love and Spiritual Virtues,” examines what it means to love one’s enemies and how it is that Christians are to do so. He argues, pace Kant, that there is an affective or emotional element to love for other persons, defining love as “to cherish him or her, to see (feel) the person as valuable, as good, as excellent, in some way that nears the heart of the loved person’s being,” and then also to “wish him well, desire his success, well-being,” and so forth (p. 159). He then makes the counterintuitive claim that “Christianity does not advocate unconditional love if that implies no conditions at all: the one loved must be good” (p. 160). However, God himself supplies this condition in the gospel. Roberts argues that in order to love our enemies we must see them in a certain light, a light supplied by Christian doctrine: “that the enemy is created in the image of God, that the enemy is one for who Christ died, that God loves his enemies, among whom we were once counted” (p. 167). Thus, Christian doctrine supplies the necessary good which makes love for enemies possible.

Turning to the work as a whole, a few criticisms are worth noting: the first is an implicit contrasting between “traditional” philosophy of religion with philosophical reflection working from explicitly Christian assumptions. Though in some chapters the relationship is framed as oppositional, it need not necessarily be so—the two activities are asking different questions and pursuing different goals, and pitting the one against the other may needlessly harm both. Secondly, the relation between some of the chapters and the theme of the book is not always clear. In Walsh’s treatment of moral character, wisdom may be in the background but it is never mentioned. Similarly, Weithman’s chapter mounts a strong case against “the spillover argument” against political liberalism, but no attempt is made to connect it to the theme of the book. Thirdly, the chapters inexplicably alternate between footnotes and endnotes, an oversight the publisher should have corrected.

However, the strengths far outweigh the weaknesses. First and foremost, the method of the book is to be commended: philosophical analysis is consistently used to attempt to shed light on Christian concepts, but Christian doctrine plays a normative role, often overturning our natural intuitions regarding the theme in question. The second is the frequent emphasis on “personal knowledge,” with a number of chapters utilizing Eleonore Stump’s development of the concept in her recent work Wandering in Darkness. Christian theology, particularly in the evangelical tradition, has made frequent appeals to the importance of a “personal relationship” with God; these essays develop this notion with admirable clarity. Finally, in the articles that investigate the nature of wisdom there is a recurring focus on wisdom as a form of “know-how,” often related to personal acquaintance: this insight echoes the Scriptural witness—wisdom is knowing how to live well unto God.

The chapters reviewed here are by no means the only useful contributions; other standouts include Wainwright’s “Obedience and Responsibility,” Cottingham’s treatment of a meaningful life, Taliaferro’s exploration of beauty and aesthetics in theology, and Wall’s inspirational final note, “The Wisdom of Hope in a Despairing World.” Though written entirely by philosophers and a serious work of Christian philosophy in its own right, I also recommend this book to pastors and seminarians. It is a fitting example of philosophy done in the service of the church, and an illustration of theological and pastoral benefits that such endeavors can produce.