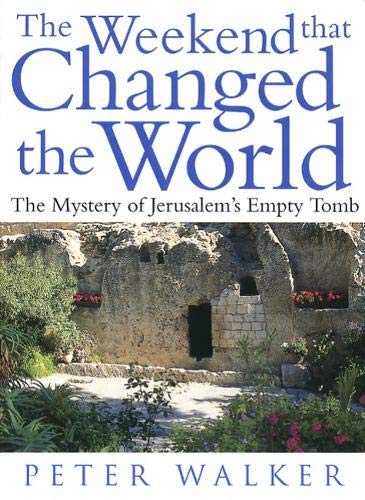 A fascinating, inspiring and challenging book. Walker turns what might have been a run-of-the-mill souvenir for tourists visiting Jerusalem into a powerful piece of evangelism. It is also generally an excellent work of scholarship, although some sections are considerably stronger than others.

Peter Walker is a tutor at Wycliffe Hall, Oxford, and currently one of the leading authorities on Jerusalem in the early centuries AD. He was invited by the association that looks after the ‘Garden Tomb’, a possible site of Jesus’ burial and resurrection, to write about the resurrection and the places linked with it. The book is in three sections.

The first is a re-telling of the story of the first Easter weekend, together with an explanation of why we should believe that the resurrection took place. The middle, and longest, section is a detailed discussion of the history of two sites, the Church of the Holy Sepulchre and the Garden Tomb, and a weighing of the arguments for the authenticity of each. The final section provides a powerful exposition of the significance of Jesus’ resurrection both for the early Church and for us today.

I began reading the book with no interest in either of the suggested sites of Jesus’ burial but found myself being drawn into their stories. By the way he writes and by a lavish use of diagrams and colour photographs, Walker manages both to present the evidence very clearly and to bring the historical characters alive. I could imagine Eusebius, for example, wary about the bishop of Jerusalem, his rival, but exuberant about the apparent arrival of God’s Kingdom with the accession of Constantine, and about the amazing discoveries that had been made under the now-demolished temple of Aphrodite in Jerusalem. The arguments for the authenticity of the Garden Tomb (favoured by most Protestants) and of the Church of the Holy Sepulchre (favoured by most other kinds of church) are judiciously expressed. Walker sets out the evidence and shows its limitations. We are left to decide for ourselves. He communicates clearly the way in which the Garden Tomb, a place set aside for remembering Christ’s resurrection, functions powerfully irrespective of whether it is the right tomb or not.

Also excellent is the final section. Walker depicts the consequences of the resurrection on a wide canvas—from the affirmation of Jesus’ life and teaching to the affirmation of hope for the world and of the victory and judgement of God. He then argues persuasively for the need for each of us to meet Jesus personally. I was pleased to see that Walker did not ‘pull his punches’ about judgement and hence about the challenge that the Gospel presents.

A criticism of the final section would be that it is rather derivative: I kept expecting N.T. Wright’s name to appear. The more serious weakness in the book lies in the method of its first section. Here, I think that the attempt to be souvenir-cum-scholarly-text-cum-evangelistic-book unravels somewhat. Walker re-tells the events of the Passion and Resurrection with particular attention to the sites around Jerusalem where they happened. He gathers material indiscriminately from all four Gospels, often producing rather odd syntheses by drawing together isolated pieces of data from the four stories—most notably in constructing a family tree of many of the characters. To be evangelistic, you need to persuade. Walker does not explain or defend his method for this section and it ends up feeling very arbitrary. However, his chapter on the reasons for believing in the Resurrection is well argued. Walker explains many of the classic arguments clearly and effectively.

If you are interested in Jerusalem, you will find this a valuable book. If you are not interested, it may make you interested. It will also make you think seriously about the significance of the Resurrection. The beautiful presentation of the book makes it particularly suitable for buying as a gift. Anyone receiving such a gift would discover that it contained not just interesting pictures but a great deal of thought-provoking, and possibly life-changing, material.

Northern College and University of Manchester