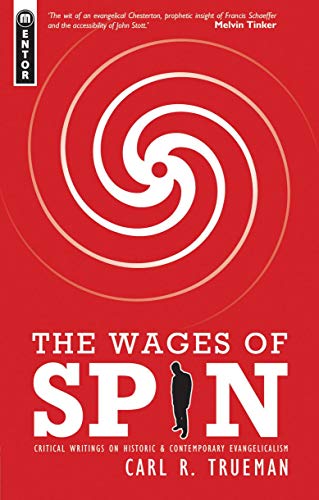 THE WAGES OF SPIN

The sub-title of this book is ‘Critical Writings on Historic and Contemporary Evangelicalism’. The author’s various topics illustrate, and are held together by, his passionate conviction that academy and church should both learn from the past so that they may listen to and support each other in today’s culture. He believes and demonstrates that scholarship should not only be biblically faithful and rigorous, but also mindful of the needs and mission of the church; and that the church’s life and experience should always be built on sound theological foundations.

The book is in two parts, the first and longer presenting six ‘Evangelical Essays’. The first of these reveals the author’s basic stance: ‘Reckoning with the past in an anti-historical age’ examines the anti-historical tendencies at work today in society, academy and church. He notes that in society ‘the rhetoric of the new and the novel quickly becomes associated with the improved and the better’ (18); that in the academy there is ‘a full-frontal assault on the very possibility of history’ (22); and that in the church ‘a clear connection is being made between attracting youth and breaking decisively with the past’ (22). In this setting, he asks, ‘why study orthodox, historic Christian theology?’ Because, he answers, it alone ‘takes seriously the biblical teaching that God is primarily a speaking God’ (28), whose meaning is not determined by the reader but by the author himself. Such theology ‘offers the most effective and biblical antidote to the forces around us which most threaten Christianity’ (38).

The second essay, on ‘The undoing of the Reformation’, looks at the theological implications of the cultural shift (from the verbal) to the visual’ (44) and at a biblical view of language. He counters the charge that ‘a word/words-based theology (in a visual culture) is in danger of making Christianity an elitist movement’ (58).

The third essay presents four these for the academy (e.g. to reform its vision of God and to acknowledge the authority of Scripture) and four for to the church (e.g. to rethink her emphasis on experience and to revise her worship practices).

The last three essays focus on specific historical figures or episodes Two are on Princeton and B. B. Warfield; the last is a critique of the understanding of Luther offered by ‘the Helsinki circle’. The essay on Warfield looks at his writings on Christology, not least at his remarkable essay’ on ‘The Emotional Life of our Lord’ (119).

The six briefer contributions in Part Two live up to their description as ‘short, sharp shocks’. On ‘The importance of evangelical beliefs’ Trueman argues for ‘the inseparability of faith and history’, drawing on Gresham Machen’s seminal book, Christianity and Liberalism. In a brilliant little piece on ‘What can miserable Christians sing?’ the author laments the absence of lamentation from the contemporary language of worship in a time when the church often apes society’s preoccupation with health, wealth and happiness.

In ‘The Marcions have landed’ the author shows how evangelicalism has become practically Marcionite, for example, in its ‘emphasis on God’s love to the practical exclusion of everything else’ and ‘its constant tendency to neglect the Old Testament’ and the Psalms (166). ‘Think truncated thoughts about God and you’ll get a truncated God; read an expurgated Bible and you get an expurgated theology; sing mindless, superficial rubbish … and you will eventually become what you sing’ (168).

‘A revolutionary balancing act’ notes the rise of an exegetical biblical theological approach in evangelical circles and argues that this should not be at the expense of systematic theology. ‘Boring ourselves to life’ looks at our ‘decidedly entertainment-based culture’ and how it and its celebrities seek to provide distraction and diversion from the serious issues of life and death.

Finally, ‘Why you shouldn’t buy the Big Issue’ wonders why ‘disagreement over … the Bible’s teaching on homosexuality has become the apparent bridge too far for the evangelicals in the mainline denominations’ (182). Why, Trueman asks, has this become the determining issue when in the past there have been episcopal denials of the deity of Christ, his substitutionary atonement, his resurrection, and the final and unique authority of the Scriptures—‘to name but four of the most basic points of kindergarten Christian orthodoxy’ (182)?

If you want stimulus to connect historic, biblical, systematic theology with contemporary culture in society and in the church, then this is the book to get you thinking.