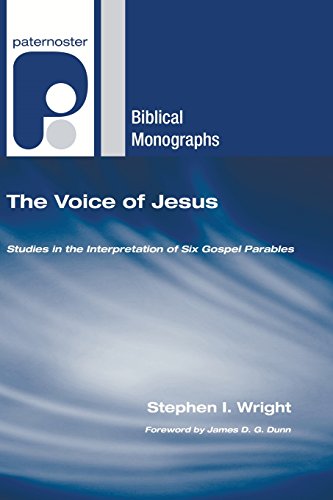 THE VOICE OF JESUS: STUDIES IN THE INTERPRETATION OF SIX GOSPEL PARABLES

Is it possible to say anything that is both new and valid about the parables? Amazingly, yes! Stephen Wright, in his recent Durham thesis directed by James Dunn, uses literary criticism to discern the ‘voice’ of the historical Jesus in the parables.

As a test case, he analyses six narrative parables all in Luke, three of the classic ‘example stories’—The Good Samaritan, The Rich Man and Lazarus and The Pharisee and the Customs Officer, and three usually not so classified—The Prodigal Son, The Shrewd Steward and The Judge and the Widow.

Wright believes that Luke, Jesus’ earliest interpreter, understands these parables as metonymies. Thus they allude to Luke’s larger narrative, highlighting his theme of the great reversal, especially with reference to poor and rich. Wright studies numerous key words and concepts in each of the six texts, showing how they tie in with Luke’s frequent use of those elements elsewhere.

Wright next shows that pre-modern allegorising has often been misconstrued. Throughout much of church history, commentators were seeking divine meaning not human intention. Still, they often presented the plain meaning of texts, before delving into more esoteric interpretations. Ambrose, Bede, Bonaventure and Calvin receive primary attention. Each moved successively further away from unbridled allegorising.

Jülicher, too, has at times been misrepresented. His one-point truths for each parable were not always as bland as has been claimed. Conversely, even he could not avoid all allegory. He recognised too that the Gospel writers have not allegorised the parables uniformly, which suggests to Wright that they never intended to do so in the first place.

Quick soundings into the works of Jeremias, Via and Crossan, spanning the twentieth-century, bring us to B. B. Scott’s large commentary of 1989. Scott focuses primarily on the effects, not the intentions, of the parables, and notes how they regularly subvert conventional expectation. His discussion however is often painfully anachronistic in reading specific modern irreligious ideologies back into a world that probably had not yet invented them.

Wright’s own approach sets the parables against the historical background of peasantry, purity and patriarchy in first-century Jewish covenantal nomism. Central to Jesus’ enterprise were both realism and surprise. Wright presents Bloom’s six literary tropes, showing why five are inadequate as ways of categorising the parables. He then opts for synecdoche as the interpretive key, following closely the work of Madeleine Boucher from the 1970s and partly resembling Ruth Etchells’ quite recent work.

These six parables portray a new world order breaking into human history with the ministry of Jesus by the use of surprising, exemplary characters. The division between example story and metaphorical narrative thus breaks down. The parables all invite one to identify with their various characters, not in isolation, but in relationship with one another and in turn. Here Wright seems to be very close to the approach I take in my book on parables, while not being as formulaic.

A short final chapter on parables and their Scriptural precursors discusses the various OT literary genres and parable-like forms within them. In conclusion, Wright eschews iconoclasm, preferring merely to claim that he has divined certain genuine insights into what Jesus intended with these stories. Wright has surely accomplished this and more; he has shown the inadequacy of previous critical approaches, rehabilitated certain pre-critical approaches, and demonstrated how literary criticism still has new insights to share with biblical scholars. As an example of methodological precision, like its approach to the parables, this book proves helpfully synecdochical—not presenting the whole story but representing a large and important portion of it.