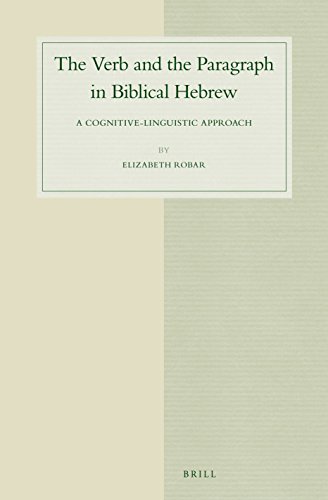 The Verb and the Paragraph in Biblical Hebrew: A Cognitive-Linguistic Approach

This monograph by Elizabeth Robar (who is Junior Research Fellow in Semitic Languages at Tyndale House in Cambridge, UK) is based in part on her 2013 University of Cambridge dissertation with the same title. The main goal of the work is to use concepts from cognitive linguistics and grammaticalization to explain how verb forms, including paragogics and energics, help to signal the flow of thought within and between paragraphs in the Hebrew Bible (pp. 146–47, 188). Chapter one lays the theoretical foundation by explaining concepts from cognitive linguistics, beginning with the principle that human minds constantly seek to organize input into a coherent whole, generating absent details as needed. The remainder of the book applies this theory to the Hebrew Bible, focusing on verb forms and paragraphs. Chapter two discusses the semantics and functions of yiqtol, wayyiqtol, wəqatal, and wəyiqtol. Chapter three does the same for wəqatal, paragogics, energic suffixes, and the lengthened yiqtol. Chapter four summarizes the conclusions, uses them to show the structure of 1 Samuel 1:1–7, and suggests an implication for the history of Semitic verbs.

The monograph’s conclusions include the following:

Many readers will find the concise introduction to cognitive linguistics in the first chapter to be quite helpful. For example, when page 19, footnote 1 moved me to explain major disjunctive cantillation marks to my students as a signal to stop and form a chunk of meaning (instead of describing them as punctuation marks, as I did previously), I heard an audible “ohh!” from my students as the lights went on.

The remaining chapters potentially present major breakthroughs in solving long-standing problems of the semantics and origin of various verb forms, paragogics, and energics, as well as how they work together to indicate the flow of thought at levels above the individual clause. Two caveats, however, are in order. The first is that the monograph presents only part of a larger system of discourse grammar and verbal semantics; discourse markers (pp. 73–74) and verb forms such as the qatal (p. 131n47) need to be analyzed and included. Second, much more work needs to be done to evaluate whether the author’s conclusions are indeed correct. The plethora of theories about Hebrew verbs in current scholarship, each supported with their own examples, demonstrates that a limited number of examples is insufficient to establish a theory. To settle the issues discussed in this monograph (e.g., wəqatal does not normally initiate verbal semantics other than purpose or result), what is ultimately needed is an exhaustive (and exhausting!) study of the entire Bible, evaluating each occurrence to see if it has the meaning that Robar proposes. For example, in preparing recently for Hebrew class, I noticed that the wəqatal in Ruth 3:9 seems to initiate imperatival semantics, apparently contrary to the claims on pages 123 and 130–31.

This monograph’s proposal is promising, and those interested in close reading of the Hebrew Bible are encouraged to learn it and use it to analyze the Hebrew text as Robar does throughout her monograph, while also evaluating, confirming, and modifying the proposal and enjoying the light that it sheds on the Hebrew Bible.