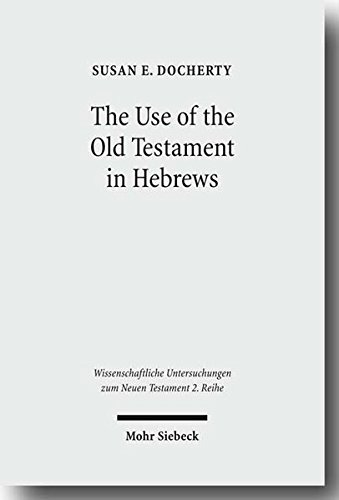 The Use of the Old Testament in Hebrews: A Case Study in Early Jewish Bible Interpretation

In this revised version of her 2007 PhD thesis, completed at the University of Manchester under the supervision of Philip Alexander, Docherty attempts to fill two ostensible lacunae in Hebrews scholarship—lacunae caused primarily by a failure to treat Hebrews as a thoroughly Jewish piece of literature (pp. 1–2). Docherty seeks to introduce Hebrews scholarship, first, to the most recent work in rabbinic hermeneutics and, second, to the most recent work in Septuagintal studies. To prove the presence of these lacunae and, thus, to justify her project, Docherty’s first chapter comprises an extended literature survey (pp. 9–82) covering twelve major commentaries (spanning five periods since ca. 1850), six monographs on the structure and theology of Hebrews, and nine studies on the use of the OT in Hebrews. Throughout Docherty insists that insufficient attention has been paid to the author’s hermeneutical methods and presuppositions and to the nature of his Greek bible (see, e.g., pp. 16–18, 22, 32–33, 42–43, 49–51, 61–63, 81–82). Docherty’s next two chapters, therefore, present new developments in the study of midrash (ch. 3) and the Septuagint (ch. 4). In the latter, Docherty follows a brief summary of research with an application of her findings to the catena in Hebrews 1 and the use of Ps 94 lxx and Gen 2 in Heb 3–4. It is, however, not until her fifth chapter that Docherty returns to her findings of chapter 3 and applies them to this same material. Docherty rounds out her study with a brief concluding chapter, once more summarizing her conclusions and suggesting a few areas for further work.

The signal contributions of Docherty’s work are the three literature reviews she includes (chs. 2–4), principally the one detailing work on rabbinic hermeneutics (ch. 3). Here Docherty not only introduces the reader to the leading doyens in this field (Bloch, Vermes, Heinemann, Fishbane, Boyarin, Neusner, Goldberg, Samely, Alexander), nicely summarizing their work, she also surfaces the critical issues (pp. 115–19). Docherty’s application of this work to the study of Hebrews is also useful. She particularly develops the relevance of Alexander Samely’s work on the interpretation of direct speech in the Pentateuchal Targums and his work on the hermeneutical methods evidenced in the Mishnah (see pp. 107–12; also pp. 143–44). When applied to Hebrews, Samely’s work provides new (or more often, precise) resources for explaining, for example, the predominance of direct speech in the catena of Heb 1 and the author’s segmenting of Ps 94 lxxin Heb 3–4 (see, e.g., 3:15, 4:3, et al. ch. 5). To her credit, Docherty does not overindulge in parallelomania, noting on more than one occasion ways in which Hebrews’ use of Scripture is distinct (see, e.g., the note about historical sequence on p. 196; see also pp. 177–79).

Beyond this, Docherty’s work is helpful for a handful of additional reasons, among which are the following two. First, she draws attention to the reevaluation of the antiquity of Lucianic readings (pp. 127–29; esp. in light of 11QPsa) and to the discovery of 4QDeutq and P. Bod. XXIV, demonstrating the significance of these matters for text-critical decisions in Heb 1 and 3–4 (pp. 133–34, 135, 136–39). In doing so, Docherty provides evidence that points against common assumptions about the author of Hebrews’ freedom with his received text and also shows that the author holds presuppositions about Scripture very much in line with what Samely and Alexander found in rabbinic literature (see p. 141n91; cf. pp. 108, 113, 177, 180, 194). Second, Docherty identifies one or two fresh correspondences between the citations in Hebrews. For instance, in discussing the use of Ps 2:7 in Heb 1:5, Docherty suggests a potential link between Ps 2:12 and the citation of Isa 8:17 in Heb 2:13 (πείθω; p. 151, though she misses the link to Isa 8 in 4Q174, see p. 154). In another place, discussing the use of Ps 103:4 lxx in Heb 1:7, Docherty notes the reference to “oil and gladness” in Ps 103:15 lxx and suggests it may further connect this citation with that of Ps 44:8 lxx in Heb 1:9 (p. 163).

Docherty’s work is also open to a few criticisms. First, despite the usefulness and scope of her literature reviews, Docherty’s interaction with secondary literature is, at points, surprisingly incomplete. Docherty makes no reference to Herbert Bateman’s study (p. Lang, 1997), though it covers similar ground. Much the same could be said for Instone-Brewer’s work (Mohr Siebeck, 1992), though Instone-Brewer at least makes an appearance in the bibliography (not an infrequent phenomenon). Moreover, Radu Gheorghita’s in-depth study on the role of the lxx in Hebrews (Mohr Siebeck, 2003) receives relatively little attention (two citations), none at all in the chapter specifically dealing with the author’s Vorlage. There it is also surprising not to find mention of Rüsen-Weinhold’s work on the Greek Psalter in the NT (Neukirchener, 2004). Other relevant omissions could be noted. Second, and more generally, Docherty’s thesis promises a bit more than it delivers. No doubt part of this may result from the space given to reviewing secondary literature (130 + pp.). In any case, when matters finally turn to Hebrews, the payoff, while helpful, is relatively meager and not entirely original, as the footnotes in one or two places attest (see pp. 135n64; 137n76, 137n79). Perhaps it would have been more helpful to concentrate exclusively on Samely’s work, showing in detail its relevance to the entirely of Hebrews.