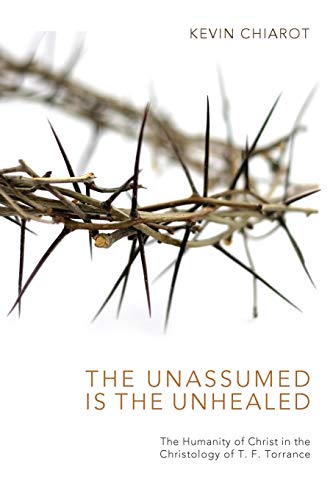 The Unassumed Is the Unhealed: The Humanity of Christ in the Christology of T. F. Torrance

Did the Son of God assume fallen humanity in the incarnation? The Scottish theologian T. F. Torrance (1913–2007) answers yes and argues that this assumption was necessary for the salvation of the world, following Gregory Nazianzen’s dictum: “the unassumed is the unhealed.” The incarnation occupies a central and gravitational place in Torrance’s theology, thus the assumption of fallen humanity is not a Christological footnote but a crucially important aspect of his thought. In this volume, Kevin Chiarot traces the significance of this “non-assumptus” principle for Torrance’s theological vision, and offers some insightful challenges to Torrance’s Christology along the way.

Torrance is quite possibly the most remarkable English-speaking theologian of the past century, and it is unsurprising that the corpus of secondary literature devoted to his thought seems to be expanding at an increasing rate. Among these works are quite a few studies of his Christology, but as Chiarot observes in his initial literary survey (pp. 1–22), none of these give substantial attention to or critical interaction with Torrance’s “non-assumptus” principle. This oversight is unfortunate, and Chiarot sets out to correct it. This work, Chiarot’s 2012 doctoral dissertation at the Highland Theological College, strikes a refreshing balance of charity, appreciation, and critical reflection.

As Chiarot explains, Torrance does not argue that Christ sinned in his incarnate life. Rather, the Son assumed our fallen, sinful human nature and in so doing sanctified it from the inside out (p. 91). This is necessary because for Torrance, “human nature has dynamic, temporal, cultural-relational, and linguistic dimensions. It cannot abstract itself from the fallen sarkic order” (p. 83). To vicariously and redemptively take our place, Christ had to truly take our place in our fallen state of being.

This movement of the Word of God into the fallen existence of mankind is seen in the history of Israel, which Torrance calls “the womb of the incarnation.” Chiarot devotes a lengthy chapter to this history (pp. 23–86). God’s reconciling Word penetrates and pervades the fallen structures of Israel’s existence, dynamically clashing with and intensifying Israel’s rebellion against God. This situation builds through the birth-pangs of Israel’s history until the birth of Christ, the New Israel, who in the incarnation enters into Israel’s fallen context and takes the judgment of Israel upon himself, accomplishing salvation for God’s people and fulfilling their destiny of bringing that salvation to the entire world. This chapter is one of the highlights of the book, in itself standing as a worthwhile contribution to Torrance scholarship in its detailed treatment of the relation between Israel and Christ.

At the incarnation, however, the exact manner in which Christ assumes and sanctifies fallen humanity is left somewhat conceptually foggy by Torrance. Chiarot asks “in what sense does the virgin birth sanctify the humanity Christ assumed?” (p. 100) The difficulty here is that Torrance sees both Christ’s act of assumption at his birth as regenerating our humanity and his entire human life as progressively healing our humanity. The result is that his humanity is in unclear continuity and discontinuity with our own. Is it like Adam’s pre-Fall humanity? Or is it like the fallen humanity of the lost? Or is it the sort of post-redemption, pre-resurrection humanity that the church experiences? It seems an analogy could be drawn here between this tension and that of the Christian life, i.e., casting off the old man and putting on the new, but as Chiarot notes, this is not the sort of humanity Torrance has in view (p. 101).

This difficulty becomes even more overt in Torrance’s view of what happens to Christ’s sinful human nature on the cross. Christ’s human nature and will (and thus ours) are condemned on the cross, yet Christ’s human nature and will are also holy in his submission to the Father, for he willingly gives himself over to this judgment. As Chiarot summarizes: “the same will is exposed and unmasked in all its wickedness, and perfectly obedient and submissive” (p. 220, emphasis in original). While Chiarot does not press this critique so hard as to charge Torrance with trithelitism (i.e., Jesus had three wills), he nonetheless notes that this tension “begs for clarification” (p. 220).

Much of the rest of Chiarot’s critical commentary arises in response to Torrance’s programmatic rejection of Westminster Reformed theology (which Torrance terms “federal theology”). Chiarot is an ordained pastor in the Presbyterian Church in America (PCA), and subscribes to the Westminster Standards. Here he suggests that Torrance has at points misread or misjudged Westminster theology.

For example, Torrance suggests that the assumption of a “neutral” human nature would be “merely instrumental” in the incarnation, and criticizes Westminster for falling into this trap. Yet, as Chiarot observes, Torrance’s adamancy that Christ remains sinless due to his divine nature even while incarnate in sinful human nature threatens to cause his own view to stumble into the pit of instrumentalism. Chiarot rejects the charge that Christ’s humanity is “merely instrumental” in Westminster theology, and counters: “one could argue that a human nature that is corrupt and depraved would be even more instrumental in the hands of God, since the only nature (or will) which can act freely to save it would be divine” (p. 157). Other topics briefly treated in relation to the “non-assumptus” principle include Torrance’s aversion to forensic soteriological categories (p. 160) and his rejection of “limited atonement” (pp. 221–22).

These questions and criticisms are only a few among several raised by Chiarot in the book, though they are also, in my estimation, the most central and unique. My summary above might give the impression that Chiarot is breathlessly at odds with Torrance in this volume, but on the contrary his work is quite sympathetic and convivial. The questions addressed to Torrance’s thought are incisive but also respectful. In short, this volume presents a significant study of Torrance’s thought as well as some exemplar reflection on the subject of the incarnation. It will be of interest to scholars of both subjects.