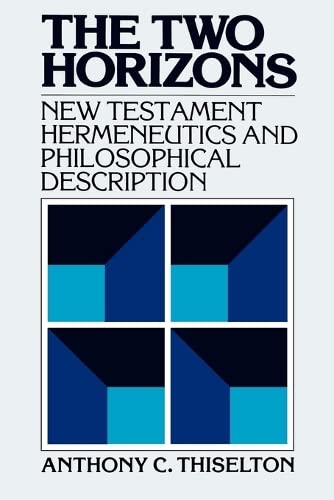 The length of the title gives it away—here we have a learned doctoral thesis which is praised in the highest terms by several famous scholars. James Torrance, for example, declares that it was one of the most competent dissertations he had ever read, and John Macquarrie says that it contains the most comprehensive discussion of the hermeneutical question he had ever come across. The average reader is not going to find the book easy going. It is written for the advanced student.

The title, Two Horizons, makes reference to the fact that interpretation is two-sided. It concerns both the text and the reader of it. The interpreter’s pre-understanding which is brought to the text is an important factor in the process of getting the meaning out. The goal of interpretation is to bring about a meaningful engagement between the reader and the text such that the text is correctly understood and the interpreter’s understanding is enlarged. Thiselton believes that traditional hermeneutics was aware of techniques for elucidating the original sense of the text, but insufficiently aware of the role of context and tradition in the horizon of the reader that affect the interpretive outcome.

The scope of the discussion is indicated by the sub-title. The writer expounds the thought of the four influential thinkers listed there as it relates to the interplay between pre-understanding and interpretation. One mild surprise in the selection of these four might be the virtual omission of Paul Ricoeur and the inclusion of Wittgenstein. But in that move Thiselton in fact opens up fresh dimensions of the subject. The book is not only a description of work that has been done, it may well be opening a new chapter in the discussion as well, the logical conclusion of which would be a book on hermeneutics by Thiselton himself. I can think of no one better qualified to write it. In a nice touch to warm the heart of evangelicals, Thiselton includes an appendix on biblical authority in which Warfield’s basic approach is approved and indeed strengthened by the addition of more recent insights.

Beyond describing the book, and commending it to our readers, I wish to point to two points of special significance in my judgment. First, I feel very indebted to Thiselton for his clarification of the intellectual roots of Bultmann’s remarkable theological dualism. I have reference to the divided field of knowledge with which he operates in which the objective content of our beliefs is surgically separated from their existential meaning. Until this time, most people have sought to trace this curious bifurcation to Kierkegaard, and see it as an intense form of his notion of truth as subjectively. But Thiselton points out in a convincing way that the roots for this proposal lie in the neo-Kantian Lutheran liberal theology of the 19th century in which Bultmann was educated. The old fact-value dichotomy of Kant is with us in a new form in Bultmann’s ‘upper and lower story’ pattern as Schaeffer would put it. I found this all very illuminating in terms of the origins of neo-liberal theology.

Second, I appreciated the refutation, modest and restrained as it must be in a thesis, of existential hermeneutics in general. Thiselton points out that, however much the new efforts may strive to interpret the Bible creatively and profoundly, very often they do not strive hard enough to interpret it correctly. They tend to make the text into a rubber nose, able to be twisted and turned at will. The author is keen to insist that we must attend to the truth claims of the text as well as to their relevance for us. At one point he even suggests Ebeling resorts to a quasimagical notion of how the text communicates with us. On the whole, his criticism is restrained—he does not wish to offend or in any way distort the intentions of those he is studying. But if you read it closely, you will detect a critical edge in the analysis which makes this book a fine piece of evangelical scholarship.

Most readers will go to the book as I did, as students keen to learn from an obvious master of his field. They will not, as I am not, be able to offer much by way of criticism, because the discussion operates at such a high level and with sources largely unknown. This is the sort of book which it is an education to read, and is recommended because it is a topic we badly need to be educated about.

Battling for the Bible—then and now

The contemporary relevance of Christendom’s creeds

by Bruce A. Demarest

Dean Burgon and the Bible: an eminent Victorian and the problem of inspiration

by Donald Dean Smeeton
VIEW ALL VIEW ALL

The Language and Imagery of the Bible

Redating the Exodus and Conquest