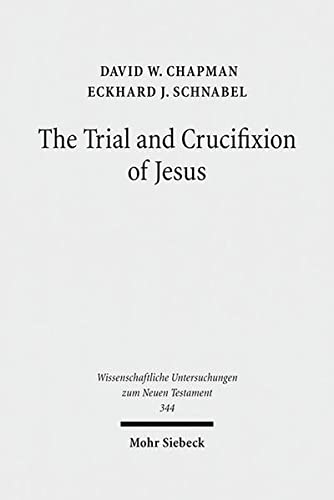 The Trial and Crucifixion of Jesus: Texts and Commentary

For those interested in examining the historical plausibility of the gospel accounts of the trial and crucifixion of Jesus, few resources could be more useful than this compendious reference work. Here in one volume David Chapman and Eckhard Schnabel have gathered an impressively comprehensive collection of hundreds of primary source materials bearing upon numerous facets of the final hours of Jesus’s life, saving the curious student of the gospels untold hours of foraging and reference hunting. PhD candidates rejoice!

The authors adhere to a consistent format throughout the book: each primary source text is presented in its original language, followed by an accompanying English translation and a brief commentary upon the text by the authors. The commentary helpfully orients the reader to the text at hand, addressing the relevance of the material for the study of the trial or crucifixion of Jesus. Chapman and Schnabel discuss such matters as the likely provenance of the material, the interpretation of the text, and competing scholarly perspectives on the text. Occasionally the authors also mention related historical considerations pertaining to the issues raised by the text. If the material is drawn from a larger work, the authors attempt to summarize the literary context of the excerpted passage. Throughout the volume, the authors also offer periodic summaries and assessments at the end of larger sections and sub-groupings of texts. These summaries successfully synthesize the contributions of the various materials and give the volume a sense of progression.

The volume is arranged topically and divided into three parts. In parts one and two, Schnabel sets forth texts and commentary which bear upon the Jewish trial before the Sanhedrin and the Roman trial before Pontius Pilate, respectively. Included in part one are texts that provide information regarding Annas and Caiaphas, the jurisdiction of the Sanhedrin, capital cases in Jewish law, the interrogation of witnesses in Jewish legal proceedings, the charge of blasphemy within a 1st century Jewish context, the charges of being a seducer or a sorcerer, the abuse of prisoners, and the transfer of court cases. In part two are texts relating to Pontius Pilate, the jurisdiction of Roman prefects, the crimen maiestatis in Roman law, reports of trial proceedings, languages used in provincial court proceedings, amnesty and the appeal of the people for prisoners, abuse of convicted criminals, requisitioning of provincials by Roman authorities, carrying the crossbeam, and the titulus specifying a criminal’s crime. Hence, parts one and two of the book offer a sweeping range of materials that bear upon the circumstances depicted in the gospel passion narratives leading up to the crucifixion scene.

In part three of the book, Chapman supplies texts and commentary which bear upon the crucifixion itself. Readers familiar with Chapman’s earlier work, Ancient Jewish and Christian Perceptions of Crucifixion, will find part three of the present volume somewhat redundant, in so far as Chapman’s previous work also provides a fairly extensive exploration of primary source material pertaining to the crucifixion. Still, the broad scope of the present work helps to differentiate the two volumes, and the different purpose of the new volume also results in a different presentation of the overlapping material between the two.

Schnabel and Chapman have produced an excellent resource for the study of the condemnation and death of Jesus. The volume is meticulously documented, surprisingly navigable, and impressively wide-ranging in its scope. I can imagine several uses for this book. First, anyone interested in examining the historical reliability of the gospel passion narratives will not find a more thorough and objective presentation of the available data than what is offered here by Schnabel and Chapman. Second, exegetes will find that the materials in this book will help to situate New Testament texts within their proper historical context. This is especially the case for the gospel accounts of Jesus’s trials, where Schnabel provides quite a bit of data that ought to influence how we understand the dynamics of Jesus’s examination and condemnation. Third, the book provides a good entry point for students interested in becoming more acquainted with the wealth of primary source material that exists for the world of the New Testament. Here are over 450 primary source excerpts, drawn from Ancient Near Eastern, Graeco-Roman, and Jewish sources, arranged topically, and presented in a straightforward way for the reader. The succinct commentaries make the material accessible and also serve as a pedagogical tool, modeling habits of good historical investigation. Finally, fourth, at well over 800 pages, the book can easily double as a paperweight, a doorstop, or a weapon to induce blunt force trauma.

I hesitate to criticize a book this long for being too short, but one way in which the book could have been made more useful for exegetes of the gospels would have been to include the relevant primary source texts for some of the events in the passion narratives which are not handled in this book, such as Jesus’s exchange with Herod Antipas, the weeping of the daughters of Jerusalem, Jesus’s promise of paradise to the penitent criminal, the tearing of the temple veil, the cosmic anomalies which occur around the moment of Jesus’s death, the declaration of the centurion, or the burial of Jesus after the crucifixion. There are important non-biblical texts that provide relevant data for understanding and assessing the historical plausibility of each of these aspects of the passion narratives. The choice not to include such texts is certainly understandable, as this would have greatly broadened the scope of the book and diluted the volume’s focus. Still, exegetes of the gospels would benefit greatly from a resource which does for the above passages what the present volume has done for others. Perhaps a companion volume is in order!

The primary readership of this volume will undoubtedly be scholars, if for no other reason than the prohibitive price. However, this book also has a certain utility for students and pastors, and those who can find the volume at a theological library will be rewarded with a resource that will surely enrich their study of the trial and crucifixion of Jesus.