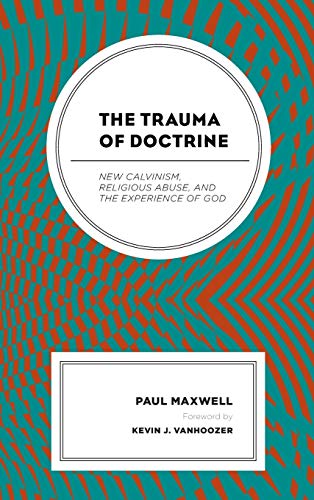 The Trauma of Doctrine: New Calvinism, Religious Abuse, and the Experience of God

The Trauma of Doctrine is a difficult book. Paul Maxwell writes as someone who has experienced religious trauma and writes of many who share his experience. Originally his PhD dissertation, the existential question that Maxwell seeks to answer is this: Will someone who apostatizes lose their soteric benefits; namely, will they go to hell? The book intends to give “a theological account of the conditions and consequences of” what he calls “trauma-induced apostasy” (p. xxii). He argues three theses in the book: “1. A Christian can lose his faith as a result of traumatic experience. 2. Reformed theology can make faith more psychologically difficult to retain. 3. The loss of such faith does not guarantee the loss of soteric benefits” (p. 303).

Part 1 addresses Reformed theology, considered as a position with a maximal view of divine providence (“MP”) and a maximal view of human sinfulness (i.e., total depravity, “TD”). Part 2 considers trauma as a wound to the imagination, which corresponds in its functions to the three aspects of faith acknowledged by Reformed theology—notitia, assensus, and fiducia. Thus, it is possible for there to be “trauma in the religious imagination” (ch. 6). Part 3 unpacks Maxwell’s original concept of “pistic resilience,” by which he means “the set of actions practiced by God and man that maintain commitment in the event of a perceived breaking of trust on both sides” (p. 198). Part four considers “pistic recovery” in terms of the challenges produced by Reformed communities and the need for “autonomy” as the solution to trauma.

While there is much that is stimulating and salutary in The Trauma of Doctrine, the argument Maxwell offers for his theses is not compelling and the solutions he proposes have the potential to be spiritually devastating.

First, the definition of the “Reformed” faith which Maxwell employs throughout the work often becomes a straw man. By isolating MP and TD from their broader contexts in a worldview that identifies itself as fundamentally biblical, he abstracts them from the context that gives them meaning. Few, if any, Reformed writers would claim that TD means abandoning human dignity (e.g., pp. 67, 305) or that humans are as bad as they could be (pp. 18, 29–30), even if we were to bracket out common grace. TD is, instead, “radical depravity”; it signifies that humans are corrupt to the core. No matter how good their actions appear, they are acting out of a posture of rebellion towards God; they are aligned with Satan, not Christ. It is thus from God’s perspective, not common sense, that they are unable to do anything good. Opposition to God will often manifest in clearly evil behavior, but also in “good” behavior that is in opposition to God, and so evil in an ultimate sense. Furthermore, few Reformed theologians would say that a sexually abused child should believe they deserved their abuse (e.g., p. 174); though culpability is one aspect of Reformed theodicy, it cannot be absolutized. In these and other ways, Maxwell neglects the ultimate, God-centered sense of reality shaping the Reformed account of the “good,” an account which is fundamental to Reformed doctrine.

Second, his account of theodicy assumes that a common-sense moral intuition is a given and that secular accounts of goodness should be accepted. However, such a view of goodness is neither self-evident nor biblically defensible. Consequently, many Reformed theologians would rightly reject it. Because there is no standard of goodness above God, goodness must take God and his revelation into account. The concept of a universal “moral intuition” is also contentious, being individually and culturally variable. A failure to address this problem of normative goodness is devasting to Maxwell’s account of Reformed theology. Similarly, in his treatment of trauma, it is by no means clear that the “imagination” performs the function Maxwell assigns to it. This view is open to theological and philosophical criticism. For example, it is not clear that we can separate our initial interpretation of extra-mental reality from our value judgments concerning it; it seems to me that these are different perspectives on what Michael Polanyi has called our fiduciary framework. Nor is it clear that the will is related to these components of the intellect in the way Maxwell articulates, let alone that “the conceptive imagination” may circumvent the “perception cycle” and act “as a source rather merely than by a source” (p. 108, emphasis original). Psychology is as philosophically loaded as theology; for a Reformed Christian to faithfully integrate theology and psychology, they must attempt to do both on a consistently biblical basis.

Third, the concept of pistic resilience is also problematic. In arguing that Christians can apostatize without losing “their soteric benefits,” Maxwell does not address the texts most problematic for this construal. In each case he cites, there are interpretations that are not amicable to this teaching (e.g., Hos 14:4; Rom 3:31; 2 Tim 2:11–13). Nor does he address the texts that indicate apostasy shows a lack of original faith (1 John 2:19), that apostasy is final and damning (Heb 2:1–4, 6:1–12; 10:26–31), and that God preserves believers by upholding their faith (1 Pet 1:3–5). Most importantly, his suggestions for how believers may actively pursue “pistic resilience” are the opposite of the Bible’s teaching. In contrast with Maxwell’s “ecclesial disassociation” or “community departure” (pp. 246–49), the author of Hebrews makes clear that staying committed to the local church is vital (Heb 3:12–14, 10:23–25).

Fourth, it is also hard to justify the claim that excommunication promotes traumatic healing in the one who has left because a church has become “toxic to one’s faith” (cf. p. 249). Instead, the texts Maxwell cites (1 Cor 5:1–6; 1 Tim 1:19; cf. pp. 249–50), and others he does not (e.g., 2 Thess 3:14–15), all indicate that separation from the body of Christ is meant to promote repentance leading to restoration. Thus, the positive advice Maxwell gives is contrary to biblical ecclesiology. Though many aspects of Maxwell’s autonomy are actually recognized by the Reformed community, namely dignity and responsibility (pp. 271–72), it is important to uphold the biblical teaching that we are not just dependent on God but on the Christian community (e.g., Heb 10:19–25, Eph 4:1–5:2), and that we have an obligation to obey and follow God as Lord. We cannot be self-governed, though we are nevertheless bearers of dignity and responsibility.

As Christians, we must care for the hurting and broken among us. When this hurt is focused on God, perhaps for having allowed abuse or trauma to occur, we must tread with the utmost care. But we cannot do so by rejecting sound theology or by encouraging the abandonment of Christian community (pp. 219, 246–50, 279). There are clearly times to leave a church because it is abusive, but leaving a specific church ought to be paired with commitment to another, more healthy, local church. For, biblically speaking, the local church is the fundamental locus of God’s saving work in the world. By ignoring this theological and pastoral reality, Maxwell’s frequently repeated advice—leaving Christian community and setting aside traumatic beliefs even for a season—may ultimately prove to be damaging to the traumatized Christian.