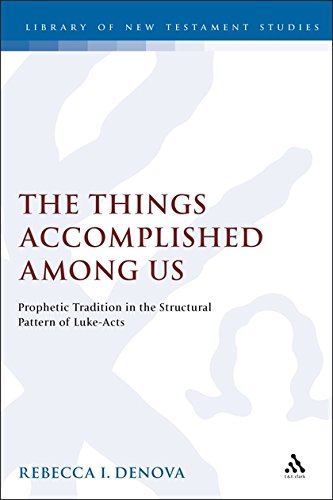 The Things Accomplished Among Us: Prophetic Tradition in the Structural Pattern of Luke—Acts

The study of the use of Scripture in Luke—Acts continues to attract scholarly attention. After investigations of ‘proof from prophecy’ (P. Schubert), ‘promise/fulfilment typology’ (N.A. Dahl), and ‘proclamation from prophecy and pattern’ (D. Bock), all of which tended to concentrate on explicit citations from the OT, Denova turns her attention to the way in which the actual narrative is shaped by scriptural allusions and other literary devices in such a way as to demonstrate ‘that everything foretold by the prophets concerning “the last days” has already “been accomplished among us’ ” (p. 20). ‘Luke—Acts is a story that looks back to the ancient events concerning Israel, understood as predictions of the future, and applies this material to the literal interpretation of recent events’ (p. 25). The purpose of this demonstration is so that Luke, a Jew(!), might ‘persuade other Jews that Jesus of Nazareth was the messiah of Scripture and that the words of the prophets concerning “restoration” have been “fulfilled’ ” (p. 231).

The author is generally sympathetic to the approacli of J. Jervell who holds that Luke envisaged the restoration of Israel by (he salvation of a remnant to which repentant Gentiles would be added. The main interest of Luke is in the ingathering of the exiles of Israel and the Gentiles are of secondary importance. This shift of attention away from the inclusion of the Gentiles offers a major re-reading of the plot of Acts.

A considerable part of the book is devoted to clearing the way for the author’s proposal (we have to wait to p. 106 for the end of the preliminaries!). Her subsequent treatment in a sense falls short of full proof, since she has room to offer only a selection of discussions of texts in Luke—Acts (otherwise she would have had to write a full commentary); it is also argued that once Luke has established a typology for one event, it can be assumed that the same OT background will apply to subsequent repetitions of the motif without the need to evoke it specifically. Indeed, at one point (p. 112) the author comes perilously close to assuming her thesis and so arguing in a circle.

A significant element in the thesis is the establishment of Luke’s typological use of the OT on the basis of allusions rather than the citations, and this extension of enquiry is one of the ground-breaking aspects of the thesis. In particular, the Book of Isaiah has provided the basic structure for the book, and the author indicates a number of cases where specific fulfilments may be seen.

But this leads to the problem of the thesis. For example, a Jonah/Nineveh typology is explored for the material in Acts 27–28. It follows that ‘the goal of Paul’s journey in Acts is Rome because of the Jonah/Nineveh association’ (p. 110) and that Luke does not require the circumcision of the Gentiles because there is no scriptural precedent for it (p. 192). Moreover, it is not always clear whether Luke has found fresh meaning in Scripture in the light of events or has rewritten the events to make them conform with Scripture. The enquiry throughout is on the literary, narrative level, and while we are told that this does not necessarily question the historicity of what is told in the story, there seems little doubt to me that in fact it does so rather frequently. The author claims that we often cannot get back behind Luke’s narrative to ‘what happened’, and the rather grudging admission (p. 223) that Luke has some specific information about Paul and his journeys(!) indicates that she is working from a sceptical position (not surprisingly in view of the claimed late date of composition—post-Josephus). Literary approaches are currently attractive to many scholars, but there is a risk of attributing material to literary factors which is properly to be explained by historical factors and of adopting an approach which threatens the historicity of the narrative.

When this and other weaknesses in the discussion (such as the failure to use works in German, including the commentaries by Schneider and Pesch) are acknowledged, there is nevertheless a high degree of acute and original observation in this book that calls for careful evaluation. If there are some ‘misses’, there are also some interesting ‘hits’, but a brief review cannot list them. This is an able book which has produced a fresh thesis in a well-worked area.