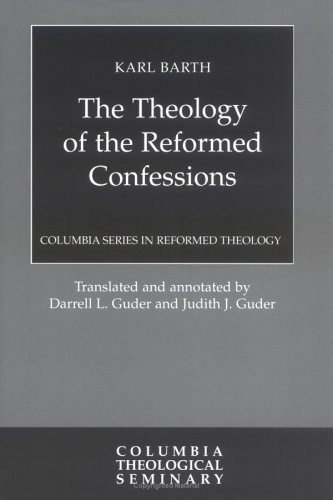 THE THEOLOGY OF THE REFORMED CONFESSIONS (COLUMBIA SERIES IN REFORMED THEOLOGY)

The development of Barth’s thought remains a lively field of inquiry, and those fascinated by it will welcome the publication and translation of his lectures on the Reformed confessions. Barth gave these lectures during a crucial period in his development, the summer semester of 1923, after his lectures on Calvin and Zwingli, before his lecture on Schleiermacher and dogmatics (what became the Göttingen Dogmatics). Several years later, Barth famously admitted that, at the time of his appointment to the new chair of Reformed Theology at Göttingen in 1921, ‘I didn’t even have a copy of the Reformed confessions, and I certainly hadn’t read them.’ No doubt Barth was exaggerating his lack of acquaintance with Reformed theology at that time, but his admission does throw into relief the astonishing mastery he was able to attain in two years’ time. These are brilliant lectures, of interest not merely for what they tell us about the lecturer, but in themselves, as a series of analyses of Reformed theology as embedded in its most public and widely-used documents.

Barth himself grouped his material into three ‘lectures’, each of which was delivered over a series of days. The first lecture assesses the way in which confessions functioned in Reformed churches (provisional testimony) in contrast to the role played by the Augsburg Confession and the Formula of Concord in Lutheranism (authoritative symbol). The second is a passionate analysis and defence of the Reformed confessions’ insistence on the role of the Spirit in establishing the authority of Scripture—an insistence whose compromise over time poses a dire threat.

Whether we will again come to know as well as Calvin did that God desires to be and is his own witness in history and in us, and whether we will then risk [Calvin’s] prescription, which is not just a prescription but health itself: to read the Bible ‘as if he living words of God were heard’—that is the fateful question whose answer will decide the future of Reformed (and not only Reformed) Protestantism (64).

The third lecture, the bulk of the work, groups and evaluates the Reformed confessional writings according to the four broad concerns which motivated their composition: to delimit Reformed from Roman Catholic, Lutheran, and (later on) modern theology, as well as to formulate Reformed doctrine in its own right. Perhaps not surprisingly, Barth argues that what unifies all of these individual documents, marking them as distinctively Reformed, is the way in which they conceive Christianity as a dialectic between divine action and human response, knowledge of God and knowledge of man, justification and visible renewal of life, the gift of faith and the task of obedience (147–49).

One of the most striking features of these lectures is that, while they are incredibly illuminating at an historical level, Barth simply cannot proceed out of merely historical interest. Barth’s express hope is that his lectures might ‘serve the awakening’ of the Reformed churched, in their own way, to that seriousness about truth which marked their sixteenth-century forebears (37). In other words, through university lectures, Barth intended them for the building up of the church, and it was in service of this goal that Barth mustered all the intensity and vigour that must have made for an electrifying summer at Göttingen.