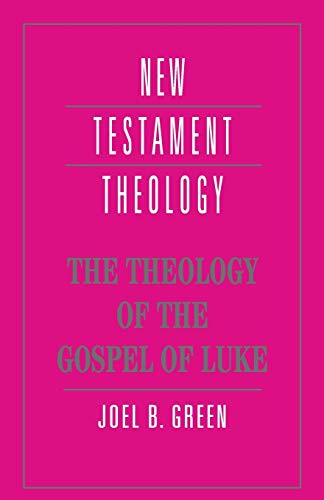 The Theology of the Gospel of Luke

Joel Green, now teaching at Berkeley in California, has contributed an impressive volume to the Cambridge NT Theology series. His chapters take us to ‘the world of Luke’s gospel’, ‘the purpose of God in Luke’s gospel’, ‘Jesus, John, and the Jewish people’, ‘mission and salvation’, ‘the way of discipleship’, ‘Luke’s gospel in the church’. The book covers a lot of ground, and is very ‘modern’ in its approach, bringing together redaction criticism, sociological thinking and hermeneutical reflection (including on the contemporary relevance of Luke). The author covers a lot of ground in less than 200 pages; he writes as an expert in Lukan studies, but at a reasonably accessible and non-technical level (though it is not always very simple, and probably not a beginner’s book!).

The book offers a more rounded approach to Luke than some others, not simply focusing on things that distinguish Luke from Mark—indeed making rather little of such source-critical comparisons—but looking at Luke’s thought as a whole. The author is very familiar with scholarly discussion of Luke, but the book is not a guide to other scholars’ views, so much as the author’s own well-informed synthesis. The author offers a sensible, balanced view of all sorts of key Lutheran subjects, such as eschatology, Judaism and Jewish hope, poverty and riches, etc. Sometimes the material is spread around (e.g. on wealth), and students will not find all their Lukan essay topics covered in one convenient location!

The author emphasizes the importance for Luke of the plan and purpose of God, and has good things to say about the relationship of the divine plan and human involvement with that plan. He also stresses the way Luke’s Jesus overturns the oppressive hierarchical relationships of unredeemed society (helpfully noting Luke’s emphasis on women, among other things). He sees Luke’s emphasis on the poor in this context: I wondered if he was in danger of downplaying the straightforward materialistic demand in Luke to ‘sell your possessions and give to the poor’, but he is right to see Luke’s emphasis on the poor within the broader context of Jesus’ concern for the marginalized and as part of his general concern for life within community. I wondered too whether his correct emphasis on the inextricability of history and interpretation led him to play down Luke’s interest in ‘the facts’: Luke surely wanted his readers to know ‘what really happened’ as well as what those happenings meant within the plan of God.