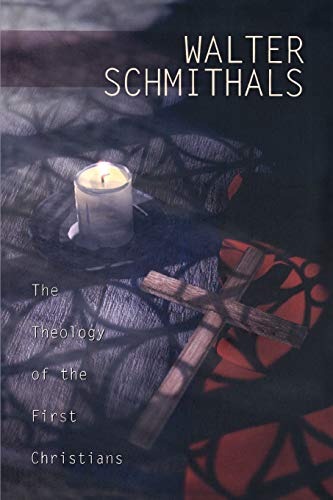 The Theology of the First Christians

Walter Schmitals may not be very well-known to readers of Themelios, however The Theology of the First Christians is a fascinating, lucid and enjoyable read. In the reviewer’s opinion it is worth reading because it will introduce those familiar with British and North American scholarship to their German sibling. In an academe which can be uncompromisingly insular this is a very good thing.

Schmitals’ chapters include the usual range of subjects such as Jesus and apocalyptic; the Son of Man; a number on Paul; Worship within Early Christianity and the Conflict between the Church and the Synagogue. The fact that Schmitals is free to discuss Paul’s conversion theology and the worship of Jesus without reference to Seyoon Kim and Larry Hurtado respectively illustrates my point concerning the insularity of the different (national) streams within NT scholarship.

In terms of Paul’s conversion, readers will be interested to note that Schmitals contends that the Apostle was converted to a Johannine type of Christianity. Schmitals is thus able, unlike a number of British scholars with whom readers will be familiar, to argue for a high form of Christological belief prior to Paul—and see the Johannine tradition as relatively early. Yet from the sources Schmitals interacts with, he does not seem to be alone within German NT scholarship in putting forward these arguments. Other dogma cherished by British and American scholarship appears to be put to the sword, for example, Schmitals argues that Paul was converted to a Torah free form of (Gentile) Christianity in Damascus.

An interesting feature of the whole book is that Schmitals does not just dialogue with NT traditions in his shaping of the theology of the first Christians: where possible he looks, for example, at the Didache and Justin Martyr for evidence. Thus on the question of baptising children, Schmitals mentions Justin, Tertullian and Origen in his discussion. Readers brought up on a diet of British NT scholarship will find this aspect refreshing.

There is so much to this book: it is very hard to know where to start, what to mention, and where to end. It deserves a place on the shelf of every NT scholar. It should find a place on the reading list of all introductory courses within NT studies. This is not because readers of Themelios will agree with its conclusions, but because it will remind undergraduates that German biblical scholarship is very much alive and doing innovative things.