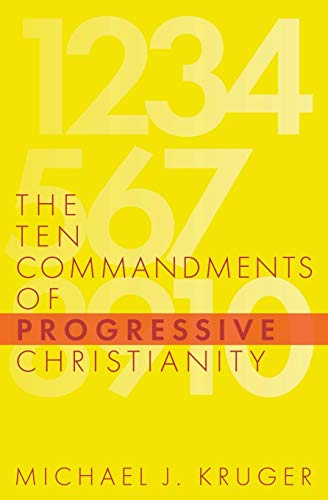 The Ten Commandments of Progressive Christianity

Michael J. Kruger is the president and the Samuel C. Patterson professor of New Testament and Early Christianity at Reformed Theological Seminary in Charlotte, North Carolina, USA. In addition to his work at the seminary, he serves part-time as pastor of teaching at Uptown PCA in downtown Charlotte. This volume demonstrates Kruger’s experience both as a scholar and a pastor, tackling academic problems that easily infiltrate the church.

The book seeks to critique ten principles of progressive (theologically liberal) Christianity. Philip Gulley (If the Church Were Christian: Rediscovering the Values of Jesus [San Francisco: Harper One, 2010]) is the principal interlocutor; the chapters of his book serve as the chapter titles in this volume as well. Kruger believes that Gulley has written nothing new, but simply redressed liberal Christianity in new clothes. The thesis of the present volume is that liberal Christianity is not Christianity at all. Kruger sets out to show why this is true.

Kruger’s tone is winsome. He never belittles his opponent(s) or succumbs to ad hominem arguments. Instead, he models good (and Christian) critique. Each chapter is four or five pages in length and dedicated to one principle of progressive Christianity. The pattern for each is similar. He begins with a brief introduction of each principle, and an anticipation of the critique he will render. He then identifies what is agreeable about the principle, or what is partially true, before moving on to deliver a biblical and theological response. Additionally, in many of the chapters, Kruger exposes the logical inconsistencies of the progressive position. He concludes with a definite account of why the progressive position is wanting, being unbiblical and less than Christian.

The echoes of J. Gresham Machen’s Christianity and Liberalism (Grand Rapids: Eerdmans, 1922) are unmistakable. Though Machen’s project was quite different, the goal was much the same. In fact, Kruger begins his volume with an appreciation of the work and a recognition of the fact that the problems Machen addressed are still much the same. However, what Kruger adds to the conversation is a more contemporary, though traditioned, response to the problems. He also engages issues now more post-modern than Machen’s modern context. Whereas, Machen’s world was concerned with scientific proofs, and with that a dismissal of ancient (and “unproveable”) authority, Kruger’s world is driven by moral relativism. Otherwise put, the problem for Machen’s era was how ancient words could have real relevance for a contemporary audience, when so much of the foundation of authority could be questioned. Machen said rejection of doctrine in his time involved “out-and-out skepticism” (Christianity and Liberalism, 19). But in today’s world, Kruger’s audience is driven by moral relativism, which is the product of the previous era. With no foundation for absolute moral truth, Kruger explains that “morality is ever-changing and culturally conditioned. There is no true morality; don’t push your morality on me” (p. 10, emphasis original).

What endures for liberal Christianity is its dismissal of doctrine and what Kruger calls the “vertical” (e.g., relationship with God) for the moral and “horizontal” (pp. 37, 42, 52). Kruger systematically and surgically shows how at each turn this project fails. A horizontal-only moralism is dysfunctional. It is baseless and unable to deliver what it promises. In fact, the very thing it shuns (i.e., doctrine) holds the answer to the problems it addresses. Examples of this can be found in each chapter, but I offer the following as a noteworthy instance of Kruger’s tactful insight: “The fundamental problem with the progressive approach to judging is that it undercuts the very goal it is trying to achieve, namely human reconciliation. Such reconciliation can only happen when wrongs are acknowledged, owned, and repented of. And in order for that to happen, judgments must be made about people’s behavior. And that behavior must really be wrong—not just wrong in someone’s opinion. Otherwise, reconciliation is a mirage” (p. 20, emphases original).

This volume is a commendable engagement with problems that persistently tempt Christians to depart from “the faith that was delivered once for all to the saints” (Jude 3, ESV). Moralism, and especially moral relativism, appear to care for the problems of the day in an especially contemporary way. But with the departure from truth, there is no way of genuinely establishing that these problems are in fact problems. And with the move away from the theological, the solution must come from within, which dismisses the fundamental problem of sin. So, liberal Christianity misses the gospel, defining human problems in human ways and prescribing human solutions. Thus, liberal Christianity is not Christian at all.

This book should serve a wide audience. With its short length and accessible style, it would be good to put in the hands of many lay people. But this would also serve theological students as a model of clear and charitable engagement with divergent theology. Any reader should be encouraged by the application and defense of gospel truth.

Apart from a couple of minor blemishes (e.g., the omission of a word on page 11 and the claim that there is no single statement that “better captures the ethos of progressive Christianity than …” applied to two different statements), the book is well-written, and an edifying treatment of why biblical Christian doctrine is worth clinging to even in days like these.

The field of the New Testament’s use of the Old Testament is encumbered with ambiguously defined terminology, especially with regard to such form labels as citation, quotation, paraphrase, allusion, echo, and the like...

The Making of Biblical Womanhood: A Review

Beth Allison Barr’s influential book The Making of Biblical Womanhood sets out to demonstrate the historical roots of “biblical womanhood,” a system of Christian patriarchy that is not really Christian...