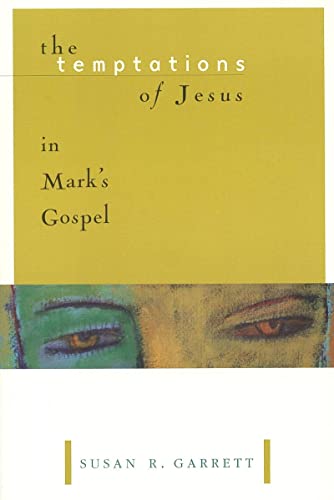 The Temptations of Jesus in Mark’s Gospel

Written by Susan B. Garrett Reviewed By Jeffrey B. Gibson
New Testament

Garrett’s The Temptations of Jesus in Mark’s Gospel is a wide ranging and thoroughly engaging study of the stories in the Gospel of Mark in which Jesus is presented as subjected to the attempts of Satan, human adversaries, and even his own disciples to sway him from a particular path of obedience that Mark calls ‘the way of the Lord’. It begins with the observation that the theme of the peirasmos (testing) of Jesus is a major feature of Mark’s narrative. It appears, she argues, not only in Mark 1:12–13 (Mark’s version of the story of Jesus’ wilderness testing); but also in Mark 8:11–13 (the story of the demand for a ‘sign’); Mark 10:1–12 (the story of a dispute with the Pharisees about divorce); Mark 12:13–17 (the story of the attempt of Pharisees and Herodians to entrap Jesus with a question on the payment of the kenson), and—in Garrett’s eyes most importantly—at Mark 8:27–33 (the story of Peter’s ‘confession’ with the will of God at Gethsemane); Mark 14:43–15:15 (the narrative of Jesus’ arrest and trials before Jewish and Roman Authorities) and Mark 15:16–39 (the story of Jesus’ Crucifixion). From this she concludes quite rightly that this theme might provide a valuable key to what Mark was ‘up to’. It gives us insight not only into the purpose for which Mark wrote his Gospel, but into Mark’s theology (his vision of God), his Christology (his vision of who Jesus was and is), his soteriology (how and why Jesus’ death ‘saves’), his ecclesiology (Mark’s vision of the church), and the nature of the duties of discipleship. But how is this theme of Jesus under peirasmos to be understood? Garrett answers this question by appealing to the Markan ‘temptation’ stories and setting them squarely within what she contends were the dominant cultural models or ‘interpretive conventions’ about peirasmoswith which Mark and his readers would have been familiar. These are, she claims, first, the ‘Job model’ of affliction (ch. 1) wherein Satan, with God’s permission, subjects the righteous to suffering in order to determine whether the tested one’s resolve to remain faithful and obedient to God can be broken; second, the ‘Wisdom of Solomon model’ (ch. 2) in which wicked human beings test God’s righteous one with extreme adversity or death because they have been blinded by the devil or their own iniquity to the fact that God has destined his servant for salvation and eternal life; third, (ch. 3) the model found in 4 Maccabees, Pseudo-Philo, and the Epistle to the Hebrews which asserts that if the righteous sufferer obediently endures peirasmos even unto death, God will regard that death as a sacrifice which atones for human sin.

Garrett’s gambit is, I think, on the whole successful. One of its many virtues is that it shows how taking seriously the cultural context in which Mark was written is still the essential tool not only for delimiting the intended meaning of Mark’s text but also for arbitrating some interpretative disputes (see, for instance Garrett’s discussion on pages. 104–15 of whether the ‘cup’ referred to in the Gethsemane story is a ‘cup of wrath’ or a ‘cup of suffering’). Garrett’s elucidations of various first century notions concerning peirasmos are valuable in their own right as succinct yet comprehensive studies from which scholars as well as students will learn much.

My only complaint is that one prominent biblical model of peirasmos namely, that associated with God’s wilderness testings of Israel, is only briefly explored and never taken up in her discussions of Mark 14:43–15:15 and Mark 15:16–39, where, to my mind, it applies. Since within these texts. Mark uses such ascriptions of Jesus as ‘Son of God’, and ‘King of Israel’ seemingly to identify Jesus as the embodiment of the people of God as well as the individual righteous Israelite, surely this model would also have been seen by Mark and his readers as standing behind Jesus’ arrest, trial and crucifixion testings.

Despite this, Garrett’s book is one which students of the Gospel of Mark will not want to ignore.