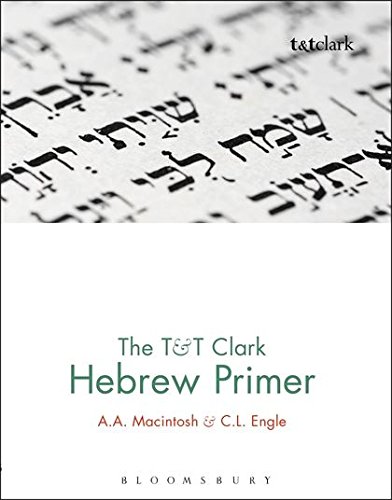 Written by A. A. Macintosh and C. L. Engle Reviewed By Paul D. Wegner
Old Testament

A. A. Macintosh and C. L. Engle are a good pairing to produce a Hebrew primer. Macintosh, dean emeritus of St. John’s College, Cambridge University, brings over forty years of teaching experience, and C. L. Engle, adjunct professor of Hebrew Bible and Old Testament at Fuller Theological Seminary, adds a fresh perspective. By its very nature, a primer is intended to be a broad overview that highlights the main points of the language, reviews language skills the individual has already learned, and is thereby not intended to replace a full Hebrew grammar (p. vii). This primer accomplishes its purpose well by containing a great deal of information in a well-organized, brief format.

After the introduction, the primer deals with nouns and adjectives, then the strong verbs and weak verbs, followed by the definite article, various types of waw conjunctions, and finally particles, prepositions and articles. It may have been more logical to deal with articles, particles, and prepositions before the discussion of verbs since the former are more closely connected with nouns. Still, the arrangement is clear in dealing with the major parts of the language.

The introduction provides definitions of foundational terms that serve as standard terminology for many Hebrew grammars. A significant drawback of this primer, however is the omission of several key rules that explain why certain vowels change. For example, one of the most important rules for determining vowel qualities is that there is always a short vowel in a closed, unaccented syllable. The rule that gutturals prefer pathaḥ explains why some shortened vowels change to a pathaḥ, whereas others change to a ḥîreq. A more salient explanation of the rules that govern vowels is that the vowel in a noun’s near open syllable lengthens (or remains long) and the distant open syllable reduces, whereas in a verb these rules are reversed (see, e.g., C. L. Seow, A Grammar for Biblical Hebrew [Nashville, TN: Abingdon, 1989], 18; Gary D. Pratico and Miles Van Pelt, Basics of Biblical Grammar, 2nd ed. [Grand Rapids: Zondervan, 2007], 32–35). Not only do these rules help to explain why vowels react the way they do when adding a pronoun to a verb or a noun, they also help the readers understand and remember why these changes occur. Thus by adding three or four rules (maybe only 2–3 more paragraphs) the readers would understand why these vowel changes occur and not just memorize the vowel changes which they will likely quickly forget.

By and large the book is concisely written, with highly instructive examples that illustrate key concepts (examples were oddly lacking in just a few instances, e.g., p. 6). Especially useful is the concept of “crucial signposts” for the verb forms (pp. 19, 21, 23, etc.)—remembering these few forms provides the major structures that the verbs will take.

One thing that was particularly perplexing, however, was the grouping of the verbs into “patterns” for rhythmic recitation. For example, they group the Qal perfect verb forms together in groups of three (3MS, 3FS, 2MS), two (2FS, 1CS), one (3CP), two (2MP, 2FP), and one (1CP). However, this arrangement is not particularly helpful in remembering the verb forms nor in understanding how the verb forms relate to each other. Perhaps this arrangement of the verbs into “patterns” just needs a clearer explanation of what they were trying to accomplish, but for most readers it would be confusing. A more transparent way of grouping Qal forms is to draw a line between the third-person forms (both singular and plural) and the second-person forms, and then contrast the third-person forms above the line to the second- and first-person forms below the line.

In a few places it would also be helpful to include the accent marks so that they can be learned along with the forms (e.g., segholate ending on the participle, קוֹטֶלֶת, p. 18; change of accent and vowel on קָטְלַנִי, “killing me,” p. 19). Because there is some variation on the tone syllable in this last example when the 1CS suffix is added (e.g., pathaḥ: הִשִּׁיאַנִי [Gen 3:13]; עֲצָרַנִי [Gen 16:2]; תִּדְבָּקַנִי [Gen 19:19]; or ṣērê: יַהַרְגֵנִי [Gen 4:14]; שְׁמָעֵנִי [Gen 23:11, 13]), at least a note about variations in this vowel pointing of suffixed verbs is needed. This is important since some Hebrew grammars suggest the ṣērê is more common on the infinitives (cf. Seow, A Grammar for Biblical Hebrew, 188).

At first glance the vocabulary section may not seem particularly useful given the plethora of Hebrew vocabulary helps that are already available. But the authors’ vocabulary helps are surprisingly effective in assisting the understanding and retention of the words. However, it would have been even more helpful to highlight words with the same root radicals so that the readers could easily see that by learning the three primary root radicals, they are actually learning multiple words that differ merely in their vowel pointings.

While any primer needs to be augmented by a full grammar, this primer is a very effective tool that can help students bring back their Hebrew skills—which also makes it a Hebrew teacher’s good friend. If the authors were to enhance the introduction by including, for instance, the Hebrew consonants, an explanation of the begadkepat letters, quiescent letters and gutturals, this book could be made even more valuable as a help for those seeking to learn, and not simply review, the basics of biblical Hebrew grammar. It is becoming more and more common in seminaries to condense the Hebrew grammar into one semester or even during a summer-school class, and a brief Hebrew primer may be the best way to point out the most crucial things to learn about the Hebrew language. While it would be very difficult to learn Hebrew by using this primer alone without a teacher’s help, it would be extremely useful for learning the basics with the proper instruction along the lines of other one-semester textbooks (e.g., John Dobson, Learn Biblical Hebrew, 2nd ed. [Grand Rapids: Baker Academic, 2014]; Gary A. Long, Grammatical Concepts 101 for Biblical Hebrew, 2nd ed. [Grand Rapids: Baker Academic, 2013]; Jo Ann Hackett, A Basic Introduction to Biblical Hebrew [Peabody, MA: Hendrickson, 2010]).