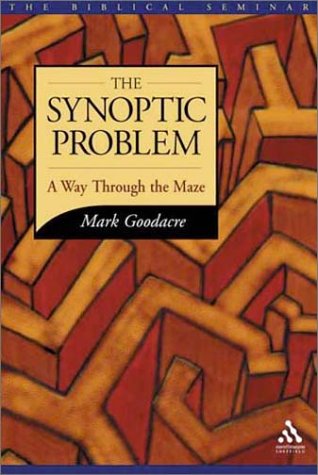 THE SYNOPTIC PROBLEM, A WALK THROUGH THE MAZE, (THE BIBLICAL SEMINAR, 80)

A book on the Synoptic Problem which is easy to follow, and an author who wants us to find the problem fun! This book is an excellent introduction to a question that perplexes scholars and bores students (often), but which remains important. Mark Goodacre from Birmingham University explains what the problem is, giving us synoptic passages to look at (and to colour-code!). He goes on to explain the arguments for Markan priority, a thesis he accepts, and then the case for ‘Q’, a hypothesis which he rejects. Finally he sets out the case against Q (rather well) and in favour of the view that Luke used Matthew, as well as Mark.

There are lots of good things about the book: it is easy to read, with useful tables and summaries, but it represents good up to date scholarship. It is not too long, and so it is the ideal student textbook on the subject. It is well argued and also sane.

One of the sane things about the book is that it takes the existence of oral tradition seriously, something that synoptic scholars so often seem to ignore. I am not sure myself if Goodacre allows it quite enough importance. He seems to think that Mark was the first to put the story of Jesus into a narrative framework, whereas I think it likely that from the earliest days of the church onwards the proclaiming of the ‘good news’ (gospel) of Jesus will have had the story of Jesus at its heart. Goodacre allows that the existence of oral tradition means that from time to time the later gospel may have the earlier form of a story or saying of Jesus; I suspect that this is a much more important factor than he allows (and so, for example, that Luke 21 is not a post AD 70 Lukan retelling of the Markan eschatological discourse, but represents an early and different tradition which was known to the apostle Paul, cf 1 Thess 2:16, Rom. 11:25). I am persuaded that Luke was written by Paul’s friend, Luke—Goodacre seems rather agnostic about the value of the earliest church testimony to the origins of the gospels—and that, as someone who spent time with Paul in Palestine (Acts 21:17, 27:1), he will have had lots of scope for investigating the story of Jesus carefully (Luke 1:1–4). This makes me less inclined to see Luke as dependent on Matthew (e.g. in the Beatitudes) than Goodacre is, though I think it is possible (as is the opposite view that Matthew is dependent on Luke, which Goodacre simply rejects).

The trouble with arguments about the synoptic problem is that so many of them are inconclusive: e.g. Goodacre doesn’t think that Mark would have left out the Lord’s Prayer if he had Matthew and Luke in front of him; but does he assume that Mark did not know the prayer or regard it as important? I assume Mark knew it in the oral tradition, but chose to leave it out. Goodacre does not think it likely that Mark would have added the story of the healing of the blind man in 8:22–26 to Matthew, if Matthew was first; but the story arguably serves as a dramatic illustration of the disciples’ growing understanding in Mark’s narrative; so he could well have added it in line with his portrayal of the disciples. (Related to that point, I was not quite clear what Goodacre is saying when he suggests that Mark has imposed his messianic understanding of Jesus on non-messianic traditions; is this Wrede back again? I take it that Jesus saw himself as the Messiah called to suffer for the sins of the people.)