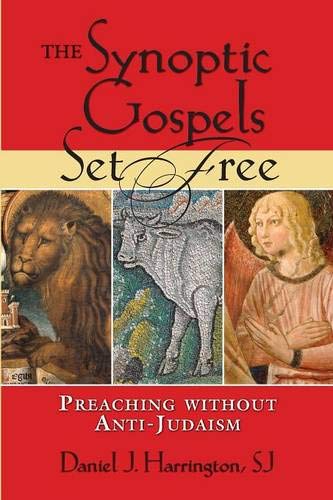 In this post-Holocaust world, interpreters of the Bible have become especially sensitive to questions about the potential for anti-Semitism in the NT. Moreover, in the wake of Mel Gibson’s The Passion of the Christseveral years ago, new questions were raised about the relationship of the NT to Jews and Judaism. One of the responses to these questions is the Freeing the Word series from Paulist Press. The first volume in this series, The Gospel of John Set Free: Preaching without Anti-Judaism by George Smiga, discusses the potentially anti-Semitic passages in the Fourth Gospel. Smiga attempts to place these passages in both their historical context and in the context of the Roman Catholic Church’s official teaching on these matters. While not repeating the church’s teaching, the second of these volumes, Harrington’s The Synoptic Gospels Set Free, shares the subtitle of the previous volume and is intended as a companion volume.

Harrington’s central thesis is “that one effective way to free the Synoptic Gospels … from their anti-Jewish potential is to read them in their first-century Jewish context” (p. 1). To that end, he works through many of the difficult passages in Matthew, Mark, and Luke. Based on the standard three-year lectionary used in the Roman Catholic Church and other denominations, Harrington discusses fifteen passages from each of the Synoptic Gospels.

Given this approach, the book essentially functions as a short commentary on the Synoptic Gospels. While we cannot summarize each chapter in this short review, most chapters follow similar formats. Harrington attempts to set each passage in its historical context, explaining problematic features and unfamiliar elements. Moreover, he has a sensitive eye for finding OT backgrounds in many of the Gospel narratives. Some of these suggestions are quite helpful and illuminating. For example, he argues that the feeding of the 5,000 in Matt 14 (and other accounts like it) finds its “biblical prototype” in Elisha’s miracle in 2 Kgs 4. Given the aim of the book, however, it is more than a short commentary on the Synoptic Gospels. Along with his comments about the historical backgrounds to each pericope, Harrington is careful to consider all possible statements that could be construed as anti-Semitic and explains why they are not.

On the whole, Harrington’s approach is often valid and helpful. As noted above, his comments on the OT backgrounds of the Gospel pericopes are often illuminating. As a commentary, this book could indeed be a helpful tool. However, the book is not without its faults. First, Harrington’s approach to the Synoptic Gospels is fairly standard Roman Catholic critical scholarship. Therefore, his assumptions would not be controversial for many. However, apart from the facts that such standard critical theories are not quite as standard as they were twenty, or even ten, years ago, his assumption that Matthew corrects the “minor errors” in Mark (p. 8), his references to the “embarrassment” of Jesus’ baptism (p. 19), and other similar assumptions are problematic for many evangelical interpreters. Moreover, such assumptions could also be problematic for Harrington’s project, for if the Evangelists felt free to alter the stories in substantial ways, how are we to know that we can accurately reconstruct the Jewish backgrounds with any degree of certainty?

A second problem is the effect that Harrington’s agenda sometimes has on his interpretation of the Gospels. While I admit that we all approach the text with agendas and biases, Harrington’s aim of explaining potentially anti-Jewish statements may lead to unnatural interpretations. For example, in his discussion of Jesus’ statement about those who do not oppose him being for him (Mark 9:40), Harrington assumes that the person in question is a Jew with no particular commitment to Jesus’ teachings. He extends this possibility to Joseph of Arimathea, proposing that Mark paints him not as a follower of Jesus, but simply as a righteous Jew. This seems to be special pleading. While Harrington is right that setting the Bible in its Jewish background will remove most if not all possible anti-Semitic material from the NT, we cannot push the pendulum so far that we dissolve the line between those Jews who followed Jesus and those who did not.

Therefore, the greatest value in this volume is probably as a short commentary on the Synoptic Gospels, especially for those who are following the standard lectionary used by Harrington. For those with little or no knowledge of the OT and Jewish backgrounds of the Synoptic Gospels, it could be a good starting point for background studies, but it may not be sufficient for a thorough knowledge of the issues under consideration.