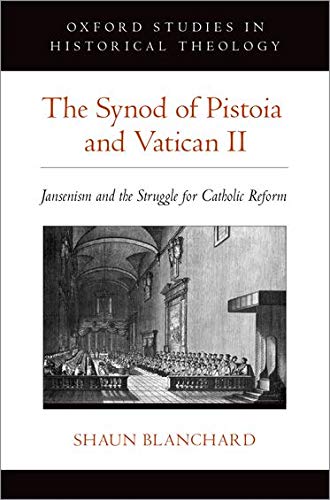 The Synod of Pistoia and Vatican II: Jansenism and the Struggle for Catholic Reform

Shaun Blanchard offers us an intriguing look at Catholic history with this monograph, a revision of his PhD dissertation. Although scholarship has frequently discerned the “roots of Vatican II” as far back as the nineteenth-century, he contends that “going back no farther than this point renders the story incomplete” (p. 3). Thus, his aim in this monograph is to consider the eighteenth century, with specific attention given to the Synod of Pistoia (1786). Blanchard in turn hopes that by “addressing the roots of Vatican II and the nature of reform,” his monograph will contribute to “the Catholic debate over the hermeneutics of the Second Vatican Council” by offering a “‘hermeneutic of reform’” (p. 4).

In the introduction, the author, after offering a summary description of the Synod of Pistoia, states that this Synod is “the best test case of eighteenth-century reform” (p. 7), both due to the significant overlap he sees between the Synod and the later Vatican II reforms and because it brought together “many reformist currents of its day.” Blanchard notes that although previous studies have seen some similarities between the Synod of Pistoia and Vatican II, they have failed to recognize “a connection” between them “that is deeper than mere surface parallels” (p. 13).

In the first chapter, he establishes the categories necessary for his later evaluation of the Synod of Pistoia. Helpfully, Blanchard clarifies what he means by reform, namely, it is a focus on merely four subjects: “liturgy and devotions, ecclesiology, religious liberty, and ecumenicism” (p. 24). This, he states, is the case because “these reforms … were central to the [Vatican II] conciliar agenda,” and therefore these areas are his primary focus throughout the book. From this, he then describes the “threefold conceptual framework” (p. 29) for the Vatican II reform: (1) the theological response to new events and situations (aggiornamento); (2) the use of historical texts and data for the present (ressourcement); and (3) the development of doctrine. Consequently, the complexity of this framework suggests a combination of continuity and discontinuity with regard to past Catholic teachings.

In the second chapter, Blanchard discusses the various attempts at aggiornamento and ressourcement in the eighteenth century. He construes the Catholic Enlightenment as a clear case of aggiornamento, whereas the numerous failed reform movements, such as Richerism and Jansenism, are examples of ressourcement. Dividing Jansenism into three periods—early, middle and late—he argues that “the Synod of Pistoia” is the “strongest institutional expression” of late Jansenism (p. 79), which he defines as, among other things, “co-operation with Christian princes” to purify the church, returning it back to “what … were believed to be practices of the Primitive Church” (p. 77).

In chapter 3, the author traces the development of “the reform agenda” of Scipone de’ Ricci, bishop of Pistoia, leading up to the Synod of Pistoia. Here, Blanchard concludes that “the close bond of all the strands of Ricci’s reform agenda” both served to galvanize supporters and create “powerful enemies” (p. 133), becoming at the same time the greatest asset and greatest liability to his reforming efforts. The fourth chapter, taking a topic approach, explores in detail “the theology of the Pistoians” by way of the “synodal Atti e decreti” and “the condemnations of the Synod in the Auctorem fidei,” noting connections with Vatican II along the way.

The fifth chapter, similar in level of detail to the fourth chapter, discusses the reception of the Synod of Pistoia and offers an evaluation of it based on Yves Congar’s “four conditions for true reform in the Church” (p. 198). In the sixth chapter, Blanchard argues, with support from the Vatican II drafts and the six “evocations” (p. 272) of Pistoia during the second session of Vatican II, that “the Synod of Pistoia was … a key moment in the Church’s collective memory” (p. 300) and thus influential in drafting documents and debates that arose. Blanchard, in his conclusion, offers the reader some implications that emerge from his study on the bearing of the “hermeneutic of reform” for a contemporary understanding of Vatican II.

There are a number of strengths to this book. Though it is clear that the author is writing from a Catholic perspective, this does not mean that he is unwilling to ask the hard questions of his own tradition or offer a critical reading of his tradition’s response to a subsequently condemned reform movement. Moreover, he clearly demonstrates the bearing a forgotten attempt at reform has on contemporary questions, showing in turn the importance of history for rightly evaluating the present. His thorough interactions with the complexities that surround Vatican II and the Synod of Pistoia, and the connections between them, make plain that his monograph is a substantial contribution to scholarship surrounding the roots, reception, and significance of Vatican II.

Beyond this, just as this study has implications for Catholic ecclesiology and practice, it also gives those not holding to Catholic teaching something of an insider’s view into the thought processes of the Catholic Church. Thus, though an insightful read, it can also be at times a painful one for someone of a more evangelical persuasion to realize how fully and forcibly the Catholic Church post-Vatican II, and therefore of our day, continues to reject the reforming efforts of the Protestant Reformation.

To conclude, this monograph is well-written and thoroughly researched. It ought to be read by any Catholic who desires to have a better grasp of their tradition or by the student of eighteenth-century church history. It would also be of benefit for those who are involved in ecumenical endeavors, especially given its clear demonstration of the importance of the past for the present regarding the Catholic Church.