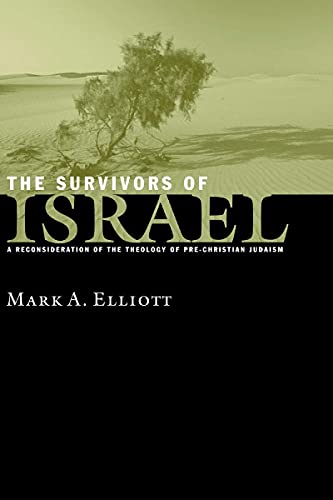 THE SURVIVORS OF ISRAEL

Written by Mark A. Elliott Reviewed By Alistair I. Wilson
New Testament

This book is a revised version of the author’s PhD thesis from the University of Aberdeen. Elliott ‘seeks to establish what might be termed a “systematic theology” of the Judaism represented by the Pseudepigrapha and the scrolls’ (4). In particular, Elliott limits himself to examination of the main ‘apocalyptic’ texts from the Pseudepigrapha on the grounds that they can be dated with the greatest degree of confidence (13–14). Drawing on S. Sandmel, Elliott identifies several ‘pillars’ of Jewish belief which include monotheism, the law and the election of Israel, and he focuses on the last of these.

Elliott notes the tension between understanding obedience to the law to be essential to individual membership in the people of God on the one hand and corporate election on the other. Having discussed several treatments of this theme by, among others Schürer, Jeremias and Bousett, who, Elliott believes, fail to resolve this tension, he comes to the work of E.P. Sanders. According to Elliott, Sanders does nothing more than express with supreme clarity the logical conclusion of the view that holds to the priority of the election of all Israel (56).

The second chapter considers texts from Qumran, including the Community Rule (1QS 5:10–13), the ‘Damascus Document’ (CD 7:9–8:2, recognising a measure of ambiguity in the passage), the Hymn Scroll (1QH 15:15–19), the Habakkuk Pesher (1QpHab 5:3–5), which indicate that the community’ expected the judgement of God to fall on their Jewish enemies and the remainder of the Jewish people as well as on the Gentiles. He finds similar sentiments in the Enochic writings, Jubilees (23:8ff.; 30:13–23), the Psalms of Solomon (8 and 17), 4 Ezra (7:1–25; 8:14–18) and 2 Baruch. Elliott concludes by challenging Sanders’ view that most Jews were observant. He draws on texts from Enoch, Jubilees, the Qumran scrolls, the Psalms of Solomon and 4 Ezra to argue that ‘they are all in agreement in their conviction that a large part of Israel—not by any means a small number—are in danger of judgement.’ He continues, ‘This conviction is expressed in many ways, including the idea that Israel is presently living in a time of apostasy’ (113, author’s italics).

Chapters three and four are devoted to evidence for the themes of ‘judgement-of-lsrael’ and limited, exclusive soteriology, while several more chapters present evidence for what Elliott describes as ‘soteriological dualism’ (ch. 7), understood as a division of human beings according to their acceptance or rejection of a way of salvation.

In the final chapter, Elliott indicates some implications of his book for NT studies. He notes numerous examples of how Jesus, Paul and other apostolic writers have been understood to be out of step with Judaism. He suggests that in the light of his study, ‘there can now be found suitable explanations from Judaism for many basic attitudes found in the NT—including that Israel, God’s chosen people, is in danger of judgement and in this regard has been placed on a par with Gentiles; that the historical covenants are not unqualifiedly valid for all who consider themselves participants in them; that the normal rites of maintaining the covenant have become ineffective; that an individual soteriology apart from previous divine acts of deliverance on behalf of Israel has now become necessary’ (664). After such a detailed study of the Jewish literature, it is a pity that the conclusion which draws out the implications of the detailed analysis is relatively brief. The book concludes with a substantial bibliography and detailed indices of subjects, modern authors and references to ancient canonical and non-canonical texts.

As with most recent studies, Elliott recognises that the work of Sanders, whatever its faults, has provided a corrective to earlier perceptions of Judaism. He remarks, ‘While other scholars have not engaged in the strong rhetoric of Sanders, most are willing to accept that the legalistic view of Judaism is at best an incomplete view’ (41, fn. 52). Yet his study demonstrates that Sanders’ presentation of election as fundamentally nationalistic does not do justice to important strands of Jewish literature.

This is a very substantial study and demands careful attention from the reader, yet it is written clearly enough that students and ministers will be able to read it with profit, although its length may necessitate many readers taking a selective approach to the material.

This book, along with the more recent volume edited by Carson et al., makes an important contribution both to a more nuanced understanding of Second Temple Judaism and to critical evaluation of the ‘New Perspective on Paul’.