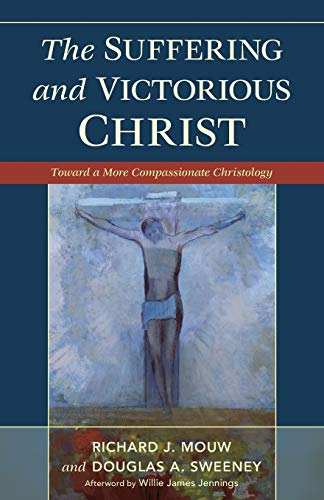 The Suffering and Victorious Christ: Towards a More Compassionate Christology

Co-authored books are experiments in collaborative theology. In this book we have a collaboration between doctrinally conservative theologians representing Reformed and Lutheran traditions on a matter that has classically divided them: Christology. What makes the collaboration possible is common concern for a Christology awake to emergent global Christianity and the literally crying need arising from the two-thirds world for a more compassionate Christology. Given its limited scope, this experiment may be judged a success; this is a judgment attested also in the valuable meditation on the post-Christendom state of theology contributed by Duke professor Willie James Jennings in the book’s afterword.

What limits the scope of the book tacitly is its location in the American context. This is a book of contemporary American and conservative-Protestant self-examination, provoked, as the authors acknowledge, by a series of probing questions posed to them by Japanese theologians at a 2010 conference in Tokyo. The book looks to a nineteenth-century Mercersburg theologian, John Nevin, and to early twentieth-century Missouri Synod dogmatician, Franz Pieper, for helpful Christological precedents in the American tradition for this announced purpose; it underscores the tensions in each of these figures with dominant forms of American Protestant triumphalism. The book portrays these theologians, each something of a misfit in his own day, as stretching classical, philosophical theism towards Trinitarian compassion—of the Trinity it can be said ontologically, God is love—and thus focusing the doctrine of the Incarnate Logos in His life-long solidarity of compassion with the poor.

Further witness to the North American location of the book is the interesting turn following these explorations of Nevin and Pieper in Chapter Five to the African American Christian tradition of “the slaves and their descendants” that lifts up Jesus in his divine-human solidarity with the suffering. Complicating this exploration in a helpful way, but again revealing the American scope of the book, is the final chapter on the abuse of the suffering Christ that the authors find in the post-bellum American South where he was conscripted to the lost cause of the slave-holders and their descendants.

Also limiting the scope of the book, explicitly, is a frequently reiterated commitment to maintain doctrinal orthodoxy in order to avoid the ontological kenoticism that haunts liberal or progressive Christologies of divine pathos. If the One who became poor for our sakes was not rich, and does not somehow remain rich in his freedom to love, then the Christus dolor (the Christ of sorrows) cannot finally be Savior—in Luther’s words, “he himself would be in need of a savior.” So in principle the book wants to qualify the Christus victor of the “orthodox” tradition with a new appreciation of the Christus dolor. What is needed is not a revisionist Christology, but a more compassionate classical Christology. Whether one should regard this a priori doctrinal commitment as a “limit” to the scope of the book, as I am suggesting, is a question about the adequacy of this little book to the enormous questions that it raises. It is best to read the book as a summons to a new and urgent task rather than as a definitive synthesis.

That is to say that an important series of questions are raised but go begging. First, can the divergences between Reformed and Lutheran Christologies simply be eclipsed by a common felt need for a more compassionate Christology? The principle, finitum non capax infiniti (the finite is not capable of the infinite) and the Johannine kai ho logos sarx egeneto (and the Word became flesh) are perhaps not so easily harmonized. Second, are these North American sources really adequate precedents for today’s construction of a compassionate Christology? As Michael DeJonge’s research indicates, the relation between Dietrich Bonhoeffer and Karl Barth provides a far more searching (and far less parochially American) resource for a collaborative Lutheran-Reformed search for a more compassionate Christology that is in arguable continuity with classical christological doctrine. Third, and immanent to the book itself, is the criticism made by Jennings in the afterword. He calls “unfortunate” the critical question posed by the authors against the post-bellum lost cause appropriation of the Christus dolor, “who owns the rights to the crucified Messiah?” (p. 100).

It may be granted that the formulation here is “unfortunate” for unwittingly entangling Mouw and Sweeney in a trope of liberal capitalism, as Jennings rightly complains. On the other hand, the critically dogmatic question (not the dogmatically conservative defense mechanism) intended by the authors here in pointing the problem of distinguishing the use and abuse of the Christus dolor is well taken: Which Christ (Mark 13:5)? What gospel (Gal 1:6–9; 6:15–16)? Whose Spirit (1 John 1:1–3)? The book is best read as an urgent summons to a new task of a post-Christendom critical dogmatics for the ecumenically reconciling ecclesia in mission to the nations. Recognizing this limit, the book makes a useful contribution.