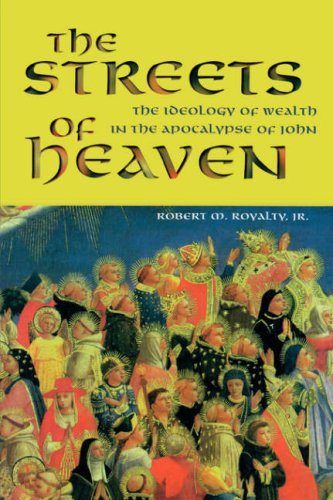 The Streets of Heaven. The Ideology of Wealth in the Apocalypse of John

This new reading of the Book of Revelation provides a confident challenge to the current range of options for the interpretation of the Apocalypse. Robert Royalty’s two distinctive positions are as follows: first, that Revelation is critical of the conceptions of wealth in the Graeco-Roman world of John’s day, but that the author merely substitutes them with a different kind of ideology which contains no justice either. Secondly, this is the result not of persecution from Rome or even from the synagogues, but arises principally out of a power struggle within early Christianity in which John is trying to persuade his audience of his own authority and that of his circle of prophets. This book comes with an investigation of early Jewish attitudes to the subject, as well as a wealth of Classical sources, and a good grasp of the secondary literature in the extensive discussion of the text of Revelation itself.

The Streets of Heaven aims very much at reconstructing the thought-world of Revelation’s audience as a key to the rhetorical impact of the Apocalypse: this is the consequence of Royalty’s suspicion about our ability to recover authorial intent. However, problems are caused by Royalty’s confidence in his ability to recover the world-view of the audience. First, he makes the decision that the audience’s understanding is defined almost entirely in terms of the Graeco-Roman context of the congregations. He effectively says that the author is drawing on OT imagery, but the audience would have heard this imagery in terms of their Greek conceptual world. The impression is given that the churches addressed in Revelation were a tabula rasa as far as the OT is concerned. However, even within the Graeco-Roman evidence used, problems arise: for example, Royalty bases a good deal on the negative portrayal of trade in Classical literature. The Apocalypse thus portrays Babylon as a city of dirty traders, and both large-scale shipping and small-scale trade are equally vulgar: Royalty mentions that ‘Cicero is quite clear about the status of petty merchants and small shopkeepers’ (103). The wealth of God by contrast is genuine, aristocratic wealth, which the saints receive by the noble means of inheritance. This is an interesting idea, but it falls down when one considers that this characterisation was an attitude that would have been held almost exclusively by the nobility. Most of the rest of urban society (and not least the majority of the Christians in Asia Minor) would have been involved in some kind of trade, whether small or large-scale.

As for Royalty’s hypothesis about the power struggle within early Christianity, this is a line which is being increasingly taken in reconstructions of NT history (for example, by Elaine Pagels, and Robert Funk). But most of these reconstructions are non-verifiable. ‘John projects onto heaven and Babylon not lower-class resentments, but the moral, theological, and ideological struggles of the Christian communities’. This is constantly assumed and asserted throughout the book, but is nowhere properly argued for. (And does a struggle for power instantiated in a text not presume ‘authorial intention’?) Again, the issue of authority (this time, textual authority) surfaces in Royalty’s statement that ‘the use of the Hebrew Bible in the Apocalypse undercuts the authority of the Hebrew Scriptures because it does not acknowledge that authority’. So, because John does not employ citation formulae such as ‘as it is written’, but merely alludes to Scriptural phrases and concepts, he is trying to create authority for himself at the expense of the OT. This is an extraordinary judgement, and does not do justice either to the way Scripture is used in Early Judaism and Christianity (various works from intertestamental Judaism, as well as Phil., Col., 1–2 Thess, 1 John do not ‘cite’ Scripture), or to the way intertextuality functions. Implicit reference to authoritative texts can reinforce that authority just as effectively as direct quotation.

Royalty raises the interesting question of how wealth can function both as something positive (as in the portrayal of God’s wealth, and Christ’s luxurious garments) and wholly negative, as in the corrupt wealth in which the Babylonians exult. And he does supply a nuanced discussion of the different ways in which wealth is thought of in (particularly) early Judaism, Cynic and Stoic philosophy (for the Cynics, wealth was an impediment to virtue, for Stoics it was a matter of indifference), and the texts of the NT. However, his hermeneutic of suspicion in his approach to the Apocalypse is often grating: by his own admission, Royalty’s understanding of the nature of justice is very different from that of John. While Royalty understands the judgement of God in Revelation as an ideology ‘with no justice’, the Apocalypse insists that this revelation from Christ must be obeyed.